Travel: South Side of the Space Coast

Where the beauty of nature and the lure of history inspire more than a day trip. 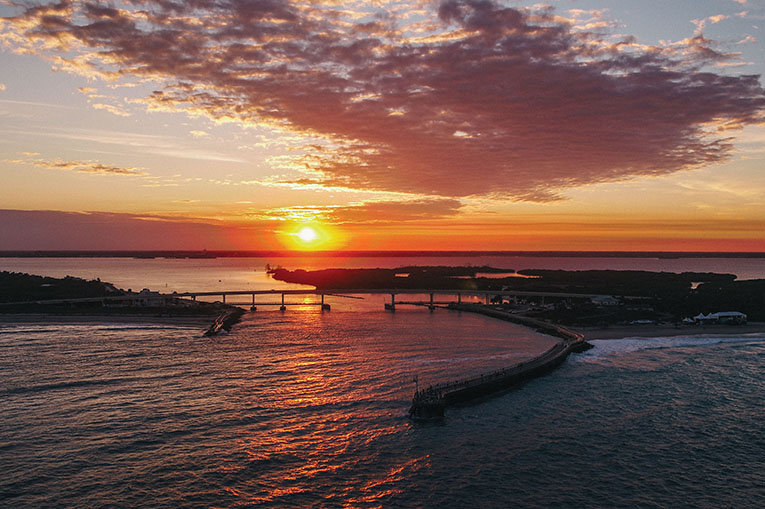 A beautiful sunrise lights up the sky over the Indian River Lagoon. (FLORIDA SPACE COAST OFFICE OF TOURISM)

When a fourth-generation Florida homesteader says sunrise is the best time to take a wildlife tour on the Indian River Lagoon, take heed. “You’ll see everything change as the animals wake up and the birds leave their rookery to start to feed,” says Jonathan Smith. For most people, arriving by 6 a.m. requires spending the previous night at a property on the south end of the Space Coast. This 17-mile stretch of narrow barrier island between Melbourne Beach and Sebastian Inlet State Park divides the Atlantic Ocean from the ecologically rich Indian River Lagoon.

To get to Honest John’s Fish Camp, turn off A1A at the Old Florida Trail—about 4.5 miles north of Sebastian Inlet—where a Florida Heritage Site sign recognizes the Smith Family Homestead, deeded in 1887. A short drive toward the river is like going back in time. First, you’ll cross land that is in the process of being returned to its natural state, a project by the Brevard County Environmentally Endangered Lands Program. Then you’ll pass through a gate and continue down an unpaved road, past a significant two-story cracker house (built by Smith’s great-grandfather in 1899) until you reach a small marina, where chickens roam free and a pig named Gator may greet you.

Captain Clark, who lives just across Mullet Creek from Honest John’s, takes up to six guests, by reservation, on a two-hour narrated wildlife tour. Clark, who intimately knows the Indian River Lagoon and its residents, peppers the tour with trivia such as, “the old-timers used to call the woodpeckers `log-knockers’.” He knows the money shot to capture the sun rising over the island and where to maneuver to spot a manatee’s nose popping up like a periscope. Clark seemingly signals a mother and baby dolphin to play in the boat’s wake, finds horseshoe crabs and jellyfish in the shallows, and identifies some 20 species of birds including a nesting pair of bald eagles. This is just a sliver of the 500 native and migratory species that find food and shelter in one of the most biologically diverse estuaries in North America.

A cruise with Captain Clark is one way to immerse yourself in nature’s simple pleasures along this largely undeveloped stretch of barrier island. All along A1A, you’ll see words such as “preserve,” “sanctuary” and “refuge” in signage. For instance, the Archie Carr National Wildlife Refuge is one of the most important loggerhead turtle nesting sites in the world. Volunteers lead nighttime turtle walks during June and July, and turtle-dig programs to watch hatchlings emerge from their nests in August and September (carrrefuge.org). 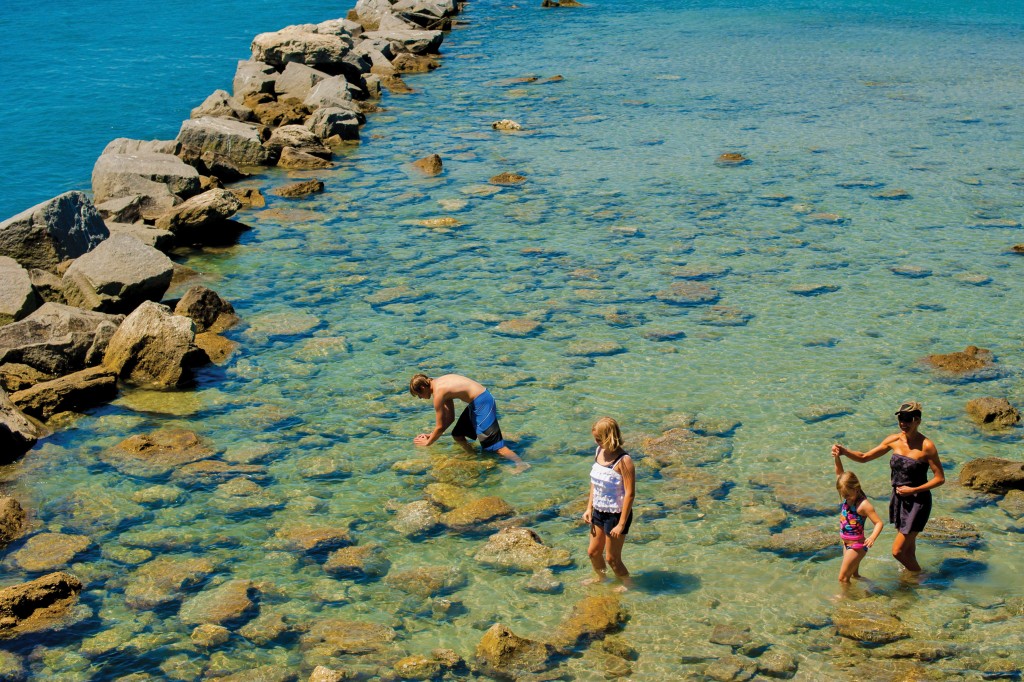 The beachfront Barrier Island Sanctuary is a free, interactive education center operated by the Brevard County Environmentally Endangered Lands Program (eelbrevard.com) and is dedicated to the creatures and ecosystems of the Indian River Lagoon. Kids love to play with the interactive exhibits and press the buttons to hear the sounds made by creatures such as a bottlenose dolphin and an oyster toadfish (some of them sound like farts and, yes, it’s funny). You can find events such as a dune-to-lagoon hike with a naturalist or information on how to upcycle various materials into a bird feeder on the Brevard County Barrier Island Center Facebook page.

If you roused early for Captain Clark’s pre-dawn tour, enjoy breakfast afterward. Drive to the nearby Long Point Cafe for a reliably good breakfast in a simple dining room with one exquisite feature: a stained-glass window featuring the hyper-local underwater wildlife (hammerhead sharks are found in this area).

Otherwise, if you’re planning to spend the day at Sebastian Inlet State Park, go straight there and have a breakfast burrito at Surfside Grill and Adventures, where you can eat on the deck overlooking the ocean and watch the surfers on one of Florida’s top breaks (world-champ Kelly Slater grew up surfing here).

If you’ve made it as far as the inlet, there’s little reason to leave: ample parking, spacious beaches, food service and watersport rentals (on the north side of the inlet) with plenty of places to fish and explore. The tidal cove on the north side is ideal for families. Tucked away and protected by a large wave break, the cove is both shallow and placid without the threats of the open water, such as riptides. 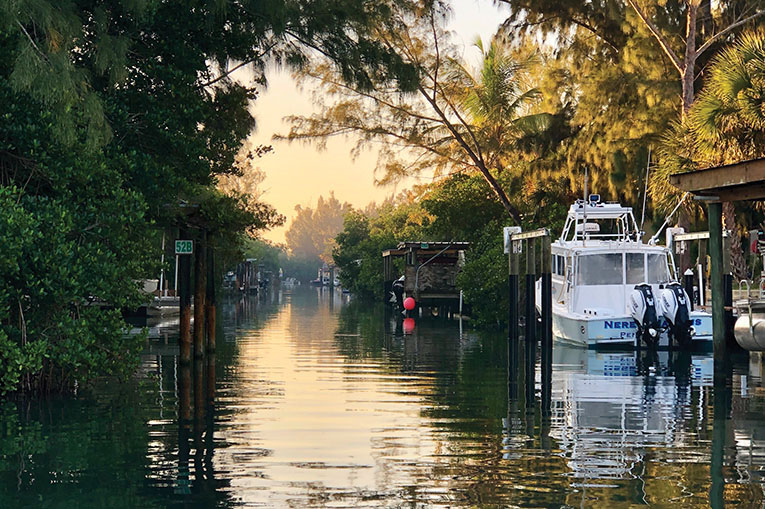 Where the shoreline continues through the inlet to the river side, large seagrass beds attract manatees who feed there. The best way to see them is by kayak. Surfside Grill and Adventures will set you up from their Bayside Marina location, just outside the north entrance of the park (you will need to drive there). The riverside bays, lined with mangroves, are calm, shallow and easy to paddle. Before trying the narrow creeks and channels toward the inlet, you need to know your tide charts, or go with a guide.

Don’t paddle like you’re on a race to somewhere. Stop often to look and listen. You’re just as likely to spot an osprey on the highest tree as you are to hear the exhalation of a dolphin clearing its blowhole before it slips under the water’s surface. See what happens after you hear the splash of a pelican dive-bombing for fish. That is when it begins its dinner ballet, perched on a mooring post and then elegantly tilting its head back to swallow its catch whole.

Mostly mom-and-pop efficiencies and small resort hotels line this section of A1A. Check out the two-bedroom suites at Seashell Suites Resort, offering such amenities as a pool, sauna, barbecue grills and bicycles. A few miles north of the Melbourne Causeway is a cluster of brand hotels with loyalty programs such as the Hilton Melbourne Beach Oceanfront and its sister property, DoubleTree Suites by Hilton Hotel Melbourne Beach Oceanfront, where each guest room is a two-room suite with an ocean view.

This is the perfect trip to visit Melbourne’s Eau Gallie Arts District, located on the mainland riverfront just north of the Eau Gallie Causeway. Artists and entrepreneurs have created dozens of murals and revitalized a nearly-forgotten town founded in the late 1800s. Download the Florida Stories app for a 12-stop, one-mile-long audio tour. Be sure to stop and enjoy a slice of cherry or apple pie at Joan’s Perfect Pie.

This article appears in the August 2020 issue of Orlando Magazine.
Categories: Local Getaways, Travel
Tags: Florida, local getaways, space-coast, Travel
Want to read the whole issue? Download and read this issue and others on Magzter.