Explore and play along Pittsburgh’s three rivers to get a better understanding of the roots of this historic city. 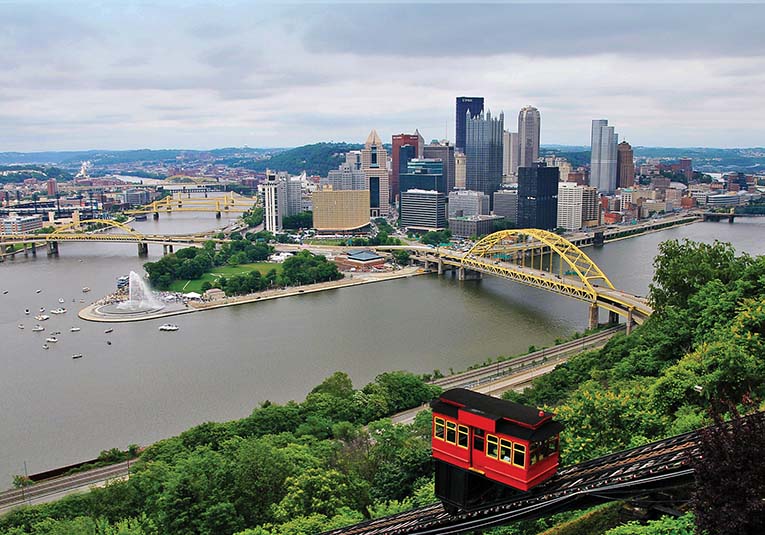 There may be no other city with such a splashy reveal as Pittsburgh. Coming from the airport, you drive through a tunnel that’s long enough for you to lose a breath-holding contest and emerge onto the Fort Pitt Bridge. For a minute, the entire horizon is filled with the dazzling skyline, multiple bridges and a glimpse of all three of Pittsburgh’s rivers—the Monongahela and the Allegheny, which converge at a triangle’s point that forms the beginning of the Ohio, from which explorers Lewis and Clark departed for the epic adventure west in 1804.

It’s no secret that Pittsburgh has shed its rep as a steel town and forged a new one as a city of innovation. Major universities, medical centers and tech companies attract the brightest minds who are creating the tools of our future. Forgotten neighborhoods have been remade into havens for chefs, brewers, artists and makers, revitalizing many of the city’s distinct 90 neighborhoods, such as Lawrenceville near downtown and the South Side across the Monongahela (locals call it the Mon). 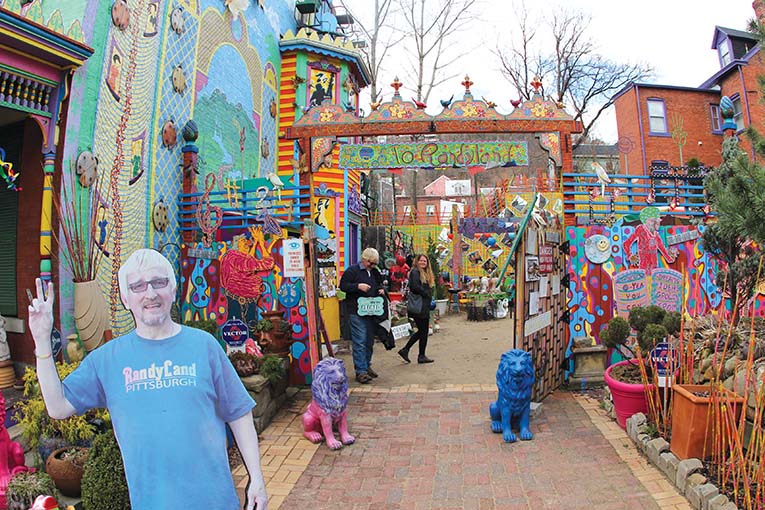 One of Pittsburgh’s most eclectic public art landmarks, you’re likely to meet the creator himself. (VISIT PITTSBURGH)

The city’s five professional sports franchises draw fervent fans. Foodies come to graze at the international restaurants, delis and food stalls of the Strip District. Those seeking culture find institutional and grassroots art, from the Carnegie Museum of Art—the nation’s first museum dedicated to contemporary art—to Randyland, an only-in-Pittsburgh whimsical installation of found objects. Randyland is one reason to visit the Mexican War Streets, a Central Northside neighborhood with a colorful history.

But to understand Pittsburgh, you have to start with the rivers. They gave life to the steel industry, providing both transportation and an unlimited supply of water, essential to the cooling process in making steel. At its peak production during WWII, “There was so much steel coming out of here, it flowed like water,” says Carly McCoy, spokesperson for the nonprofit Rivers of Steel Heritage Corporation. And then it stopped.

Shuttered mills were sold for scrap, and the city’s history began to disappear. That is, until a group of citizens took action in 1988 to preserve what was left of the Carrie Blast Furnaces site—once a massive complex of 450 buildings where, for 100 years, its seven blast furnaces transformed iron ore, charcoal and limestone into molten iron to be converted into steel at the Homestead Steel Works.

The mission of Rivers of Steel is to preserve Pittsburgh’s cultural past and ensure its future. One way it does that is by offering guided tours at the heritage attractions it is actively preserving. A visit to the Carrie Blast Furnaces National Historic Landmark is both engaging and thrilling. Ghosted graffiti on crumbling structures competes with freshly painted murals, the colors vibrant in this post-industrial landscape that is both ghost town and living history, and a muse to many.

More recently, Rivers of Steel expanded its offerings to include a 90-minute Pittsburgh 101 riverboat tour on a LEED-certified vessel. It traverses the waters of all three rivers, offering views of the skyline and the riverbanks. While on the tour, you’ll learn the stories of innovation that connect the city’s past, present and future. 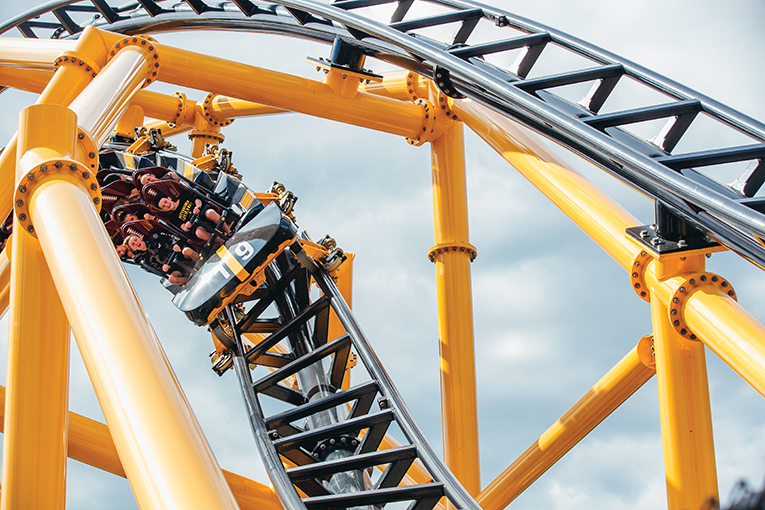 Just a mile further downriver from the Carrie Blast Furnaces is Kennywood Park, where you can pack a whole lotta Pittsburgh into a single visit. We’re talking football fandom, local history, and old-fashioned amusement park fun.

Kennywood opened in 1899. Its location overlooks the Mon and one of the last operational steel mills in the U.S. The park is as much a part of Pittsburgh culture as is Primanti Brothers’ french-fries-as-condiment sandwich. A national historic landmark, Kennywood has preserved and still operates many of its early 20th-century rides, such as the Jack Rabbit, the oldest of the park’s three wooden roller coasters.

Though the NFL season doesn’t begin until September, you can get still waive your Terrible Towel (those yellow towels beloved by Steelers fans) at Kennywood’s Steelers Country. The MVP of the hometown team-themed land is the Steel Curtain, whose stomach-twisting nine inversions helped it win the Golden Ticket Award for “Best New Roller Coaster of 2019”—a big deal in the amusement industry. A couple of Pittsburgh twists on the stadium-style food offered in Steelers Country are pierogies, a local staple courtesy of the Eastern European communities that settled Pittsburgh in the early 1900s, and salads topped with french fries.

At closing time, guests exit the park through a tunnel. Above its entrance is an oversized neon sign with “goodnight” spelled out atop a giant red heart. It is a fitting Pittsburgh farewell. 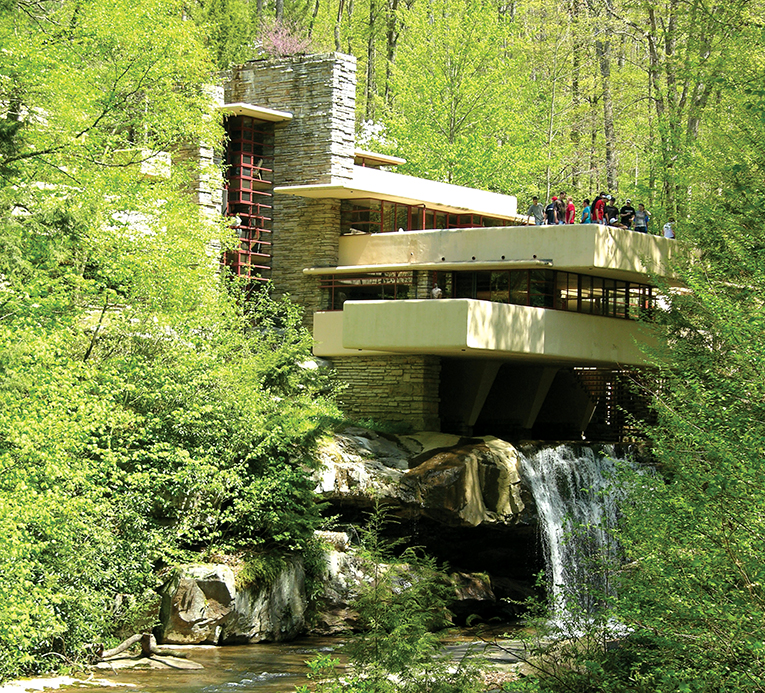 Frequent nonstop flights from Orlando International Airport make Pittsburgh an easy getaway. For more intel on the city, check out visitpittsburgh.com and discovertheburgh.com

The Distrikt Hotel Pittsburgh retains the architectural bones of the historic building that once housed the Salvation Army. The lobby, originally the chapel, features a living wall and a gallery cocktail bar; during the summer there is an outdoor terrace. The attached restaurant, “or, The Whale,” evokes a feeling of being onboard a ship. distrikthotelpittsburgh.com

The Great Allegheny Passage (gaptrail.org) is a 150-mile scenic bike trail from Pittsburgh to Cumberland, Maryland (you can backtrack on Amtrak). Many riders knock it out in three days, or you can take it slow to cool off in the waterfalls or explore trailside towns. Golden Triangle Bike can outfit and plan your self-guided ride. bikethegreatalleghenypassage.com

The Point Breeze neighborhood is dominated by one of the city’s spectacular green spaces, Frick Park. Hike the ravine near the north border (park along Reynolds Street) or enter the historic Homewood Cemetery, where you’ll see deer, wild turkeys, groundhogs and sometimes foxes among the mausoleums of many of the city’s most recognizable names: Carnegie, Mellon, Heinz and Frick. pittsburghparks.org

A visit to architect Frank Lloyd Wright’s iconic Fallingwater is just an hour and 15 minutes from downtown Pittsburgh. The home was commissioned by a local family in 1935 as a weekend getaway in the Laurel Highlands; it is built atop a waterfall on the side of a steep mountain. Tours sell out quickly, so reserve tickets in advance. fallingwater.org

This article appears in the May 2020 issue of Orlando Magazine.
Categories: Travel
Tags: pennsylvania, pittsburgh, Travel
Want to read the whole issue? Download and read this issue and others on Magzter.