With scenic bike trails, breweries, baseball and the beach, Dunedin can be a fun weekend escape. 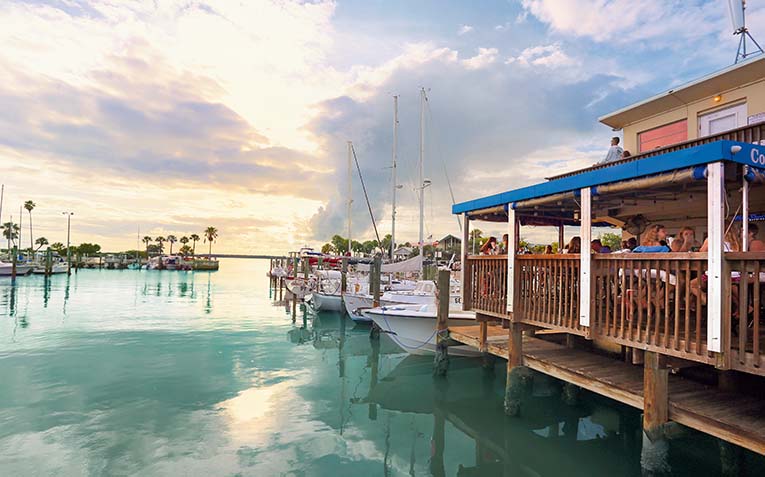 Dine over the water at Olde Bay Cafe at the Dunedin Marina and catch the Gulf and sunset views. (COURTESY OF VISITSTPETECLEARWATER.COM)

Time spent in and around Dunedin is an adventure in relaxation, from bicycling to baseball to beer. Certainly, any town that offers a walking guide to its breweries deserves to be on your travel bucket list.

This charming community north of Clearwater has seven such locales, including Dunedin Brewery, the oldest microbrewery in the state. Most are alongside or within a block or two of the Pinellas Trail, the bicycling and walking thoroughfare whose main, 36-mile stretch passes through the heart of downtown.

In fact, “within walking distance’’ describes the proximity of nearly all the must-dos in this Gulf Coast town.

Boutiques and galleries are numerous and restaurants plentiful, including standouts like The Living Room, a homey spot offering delectables such as pistachio-crusted lamb chops, and Café Alfresco, a few feet from the trail, where diners can relax on the porch as they enjoy Portabello mushroom sandwiches and blackened chicken and walnut salads. For seafood, Hog Island Fish Camp is a good bet, noted for its grouper sandwiches and smoked fish dip. For those rolling through in the morning, the egg and cheese sandwiched in a cheddar and chive biscuit is a flavorful breakfast choice at Dunedin Coffee Company & Bakery.

If you’ve come to town without a bike, don’t worry: Several rental shops in town can provide wheels. Once you hit the trail, a great scenic ride is the 11 miles north to Tarpon Springs, gliding through old neighborhoods and over waterways, with stops at parks providing lovely Gulf views. A spur takes you to Honeymoon Island State Park, where you can enjoy a stroll on the white sand beaches or hike the 2.5-mile Osprey Trail.

In April, the town celebrates its Scottish heritage with the Dunedin Highland Games & Festival.

Also in the spring, baseball abounds—Major League no less—as Dunedin is the spring training home of the Toronto Blue Jays.

Normally, the Jays host 15 games from February through March at TD Ballpark, which recently received a $100 million makeover. Games are currently scheduled March 1-28, but because of the pandemic, fans should keep their plans flexible.

The schedule for their Florida State League affiliate, the Dunedin Blue Jays, hasn’t been announced, but they typically take the field April through mid-September.

After a game, walk or bike northward on the Pinellas Trail for several brewery stops. Gems with names like Soggy Bottom and 7eventh Sun offer unique brews ranging from coconut porter to chocolate stout and everything in between. Or head over a few blocks to the Hi-Fi Rooftop Bar at the century-old Fenway Hotel and savor the sunset view over the Gulf of Mexico. Better yet, resolve to spend a night or two at the Fenway to experience a beautifully restored icon of the Jazz Age.

But don’t sleep in too late, as there’s plenty to do the next day. Perhaps your itinerary could include sampling spirits at Cotherman Distilling Co., or taking a ferry over to the secluded beaches of Caladesi Island State Park.

Whatever the choice, Dunedin is a true treasure awaiting your discovery. visitstpeteclearwater.com/communities/dunedin

This article appears in the February 2021 issue of Orlando Magazine.
Categories: Home Page Features, Local Getaways
Tags: dunedin, st. petersburg florida
Want to read the whole issue? Download and read this issue and others on Magzter.