A bucket-list adventure is in Churchill, Manitoba, just one time zone away. 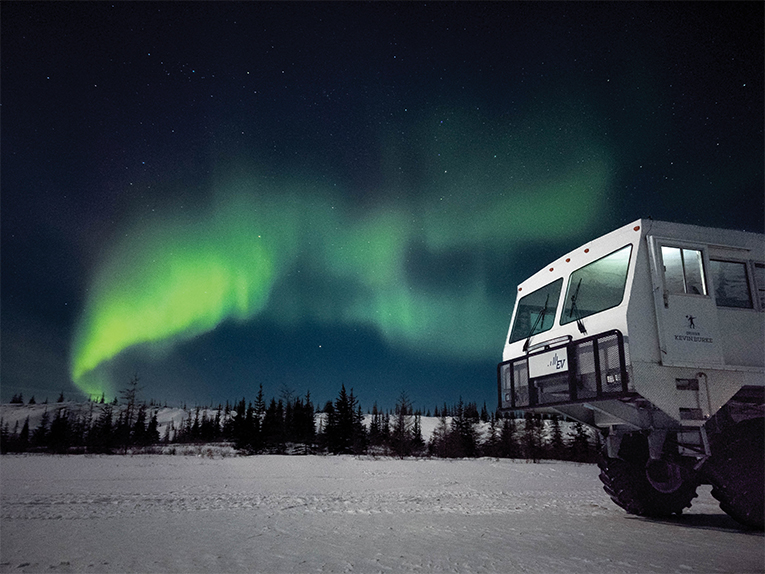 Never has a trip to an outhouse on a way-below-zero night proven so fortuitous. Waiting for the northern lights to appear in Canada’s far north requires patience, optimism, and the warmest clothes you’ve ever imagined. Our group of 13 is tucked inside a cozy log cabin, sporting a collective lumberjack look with our suspender snow pants as we lounge on benches around a wood stove. Some enjoy a midnight charcuterie, a hummus snack, and a few heads bob while taking cat naps. Still, most of us are engaged in a deep conversation with our Indigenous host Wyatt Daley, whose family is five-generations deep in Churchill.

Even a vibrant display of the northern lights can disappear without notice. When nature calls and I head to the heated loo, I pull on my Canada Goose parka, step outside into the crisp, clear night, and then look up. Stop. Blink. Pause. Then turn around and open the cabin door to alert the others, “Get outside, now!”

We’re all clumsy zipping coats, pulling on hats, and tugging on mittens, bumping into each other as everyone scrambles for a spot that’s not in anyone’s way. There is a communal euphoria in experiencing this together, with people who were strangers until a few days ago. If you had to be quiet to see the northern lights, we would have chased them away.

Though ephemeral and rare, we’ve already seen the aurora borealis on our previous nights. But tonight’s astral light show is off the charts: intense green light pulsing, forming shapes and then rearranging into new ones, moving with the wind, and arched from one horizon to the other. Tonight’s display is an 11!

Later, first-time visitor and professional photographer Michal Grajewski reflects: “You can read about it, see pictures, watch the video, go to the planetarium, know what it will be like, but nothing prepared me for when we had the jaw-droppingly beautiful, big, big, big aurora. And also, knowing how rare it was.” 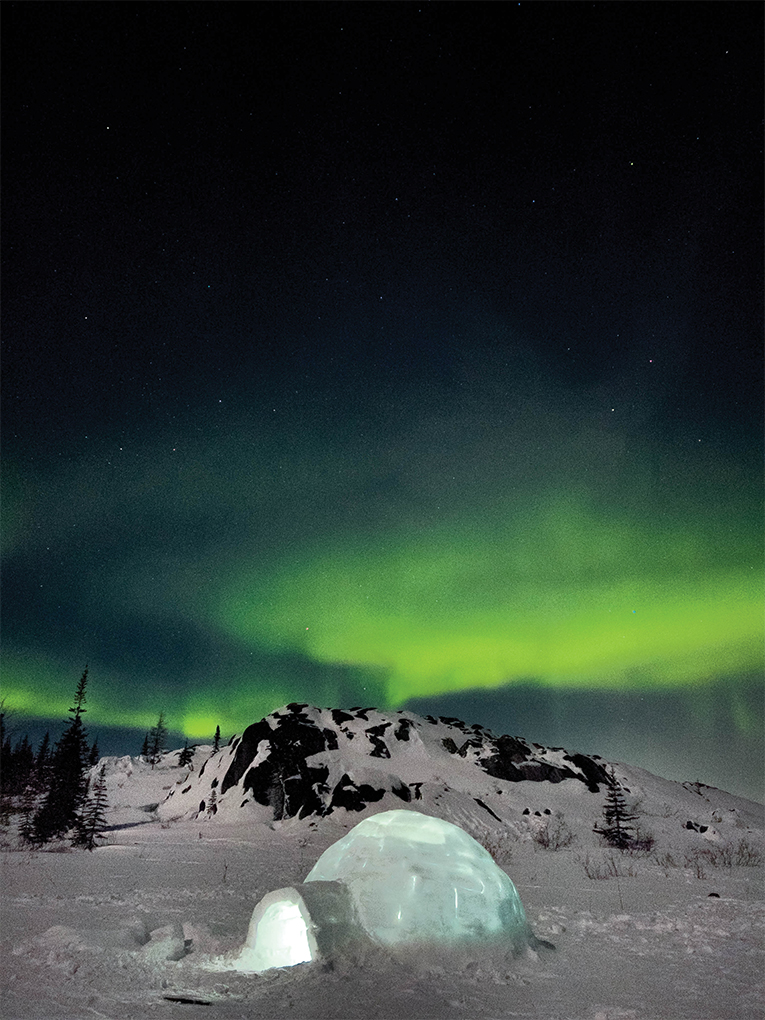 Not every trip to see the northern lights is so successful, but if you travel to Churchill, Manitoba, in subarctic Canada, the odds are in your favor. Here, the aurora borealis is seen 300-plus nights per year. Better yet, Churchill is one time zone west of Orlando and 2,200 miles north, as the arctic tern flies.

Veteran tour company Frontiers North Adventures dials in on February and March to offer all-inclusive packages that start and end in Winnipeg and include the flight to Churchill. Every trip begins with a visit to the Manitoba Museum in Winnipeg, where a planetarium astronomer explains the natural phenomenon. Just about everything that is known about the northern lights was discovered in Churchill.
Increase your odds of seeing them by choosing the Photo Specialist itinerary featuring four unique nighttime viewing opportunities: a heated yurt in the boreal forest, a Tundra Buggy® converted into a modern dining room on a remote patch of ice, a log cabin and tipi at a Metis and Cree family’s dog sledding homestead, and another buggy converted into a cozy lounge with a rooftop viewing platform.
Days are filled with immersive experiences in the landscape, such as dog sledding and snowshoeing. Other outings provide deeper learning about the polar bears and beluga whales for which Churchill is best known, the subarctic ecosystem that supports them, and the people whose stories are deeply tied to the latitude of 58 degrees north. 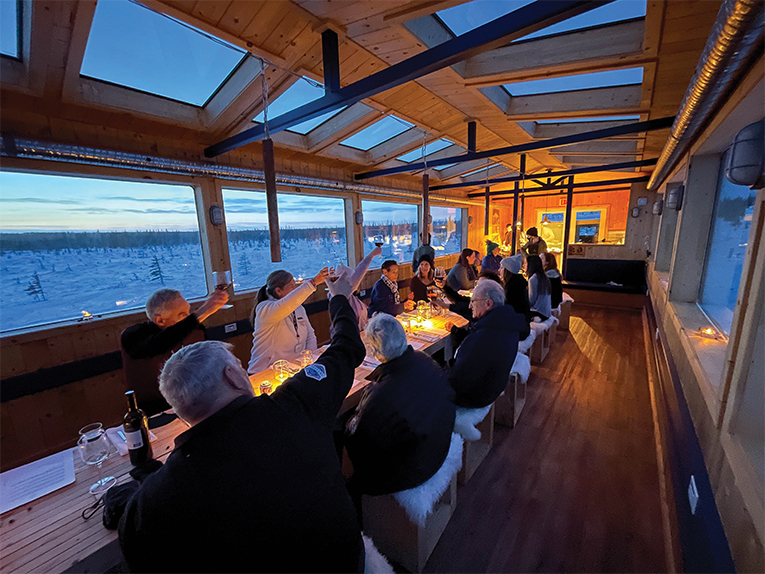 Every itinerary includes one night at Dan’s Diner, created by Frontiers North for the northern lights season. Invited chefs lead a team to create a dazzling six-course meal with a decidedly Canadian feel: wild game in the lasagna, cloudberries with the apple tart, black currant jam with a biscuit, and browned butter to accompany a smoked parsnip soup. The beverages showcase Canadian wine, beer, and pre-blended small batch cocktails. I started with a Manitoba Mule: vodka, maple, ginger, lime, hibiscus, and Manitoba blueberries.

The experience of getting there deepens the pleasure: riding 40 minutes in a Tundra Buggy® over the snow-packed Churchill River and then stepping into a stylish dining car with oversized windows, skylights, and a long table down the center of the room.

Between dinner and dessert, we head outside to a roaring fire and a nip of whisky–a prelude to the evening’s main event, for which I struggle to stay awake because of the alcohol and big meal. The northern lights rarely appear before midnight, but when the first hint of green appears in the sky, adrenaline kicks in, and I’m outside with the rest. Now that I’ve had a taste of the north, I want more. I’ve learned that in summer, thousands of belugas migrate to the river below my feet, and in late fall, the polar bears converge nearby to wait for the ice to form on Hudson Bay so they can begin hunting. One couple on our trip has already booked a return visit to see the polar bears.

“People come to Churchill to check the Northern Lights off their bucket list,” says Frontiers North guide Wade Cameron. “Instead, they add to it.” 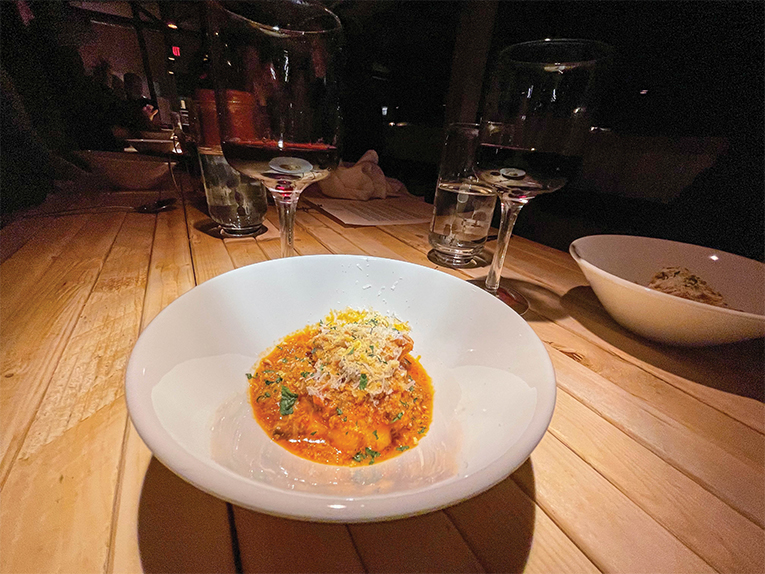 Pack your passport and fly to Winnipeg, above North Dakota. Frontiers North Adventures tours begin with two nights in Winnipeg before the round trip two-hour flight to Churchill.
The group visits the Manitoba Museum for an introduction to the northern lights and the excellent exhibits about subarctic Manitoba and the Inuit people. Another must is Qaumajuq, a new museum home to the world’s most extensive collection of contemporary Inuit art. It’s closed on Mondays, so consider coming a day early if necessary, when you can also visit the outstanding Canadian Museum of Human Rights, directly beside your host hotel, Inn at the Forks.

Give this expedition a vacation vibe with several hours at Thermëa, a Nordic spa complex that is primarily outdoors. Winnipeggers will tell you it’s at its most magical in winter when steam from the hot pools, saunas, and wood-burning fires enshrouds the piles of snow. Frontiersnorth.com, travelmanitoba.com

Yes, it’s freezing in Manitoba in February and March. But with an adventurous attitude and the right clothes, you’ll be warm. Frontiers North’s gear rental program is stocked with the best brands for the lowest temperatures and is worth every Loony.

This article appears in the August 2022 issue of Orlando Magazine.
Categories: Travel
Tags: aurora, manitoba, northern lights, Travel
Want to read the whole issue? Download and read this issue and others on Magzter.