Louisiana’s Cajun Country has such a profound sense of place that hearing just one note of music or tasting one bite of food tells you exactly where you are. In Lafayette, just a two-hour drive west of New Orleans, you’ll discover one of the most colorful cultures in America. Cajuns are known for their zest for life or, as they say on the bayou, their joie de vivre. The Wall Street Journal’s MarketWatch recently named Lafayette the “Happiest City in America,” and it’s no wonder—with amazing food, lively festivals and upbeat Zydeco music, you can’t help but feel good.

Cajun culture dates back to 1765. Two thousand miles away in Acadie, Canada—in what is now Nova Scotia—some 18,000 French Catholic settlers were pushed out of their homes for refusing to speak English and to worship at the Anglican Church. Many of them made their way south to Louisiana where they settled among the mossy cypress bayous. Because they had been unwanted exiles themselves, they greeted strangers with warm hospitality. Living off the land, they turned pork, crawfish, rice and chicken into such savory dishes as jambalaya, gumbo and étouffée, and they embraced their heritage through music. 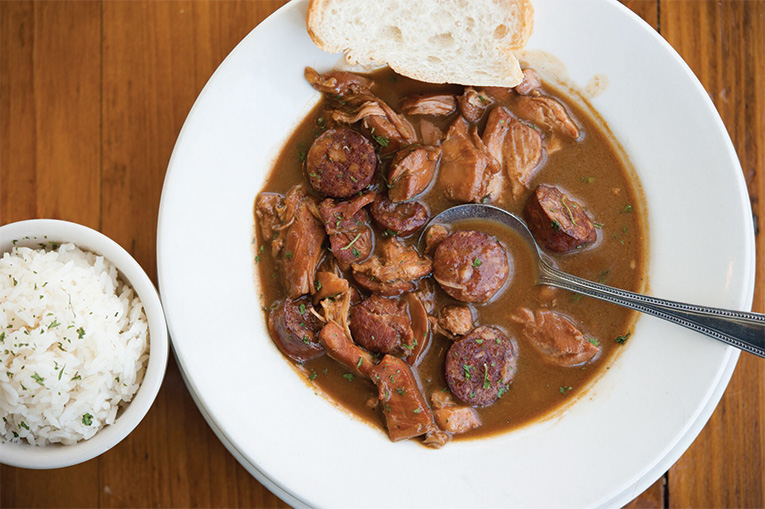 Made with sausage and chicken, Cajun-style gumbo warms the soul. (DENNY CULBERT/COURTESY OF LAFAYETTE TRAVEL)

One of the best ways to experience Cajun culture is to attend a fais do-do—dance parties that pop up pretty much anywhere. From Vermilionville’s Historic Village to the popular farmers market at Moncus Park, musicians bring their instrument of choice (usually an accordion or fiddle), pull up a chair and start playing. And where there’s music, there’s dancing. You’ll hear amateur artists at impromptu jam sessions as well as Grammy Award-winning musicians performing at venues around town, often singing a blend of French and English known as Cajun French.

Grammy-winning producer Joel Savoy is part of Louisiana Crossroads, held October through May at Acadiana Center for the Arts. The concert series brings together a new generation of artists and long-time legends. “Lafayette is a music city. Everything involves music here, and you can go dancing anywhere,” says Savoy. “You go to Nashville, you catch a show at the Grand Ole Opry. Come to Lafayette, and you want to catch a show at the Acadiana Center for the Arts.”

For an early-morning dance party, head to Buck and Johnny’s in Breaux Bridge, just named No. 7 on Southern Living’s list of best food towns (Winter Park was No. 8). Every Saturday, Buck and Johnny’s hosts a Zydeco breakfast with a dance floor that is rocking by 8 a.m. And if you can’t Cajun two-step, the locals will teach you. Showcasing a quirky combination of bowling, live music and dancing, Rock ’n’ Bowl’s 16 lanes of bowling play second fiddle to lively entertainers on stage like Chubby Carrier and the Bayou Swamp Band.

After a fais do-do, refuel with some local cuisine. Grabbing a po’ boy is a great place to start. Short for “poor boy,” Louisiana’s iconic sandwiches were created by Cajuns during the Great Depression for workers on strike. Today’s variations come dripping with roast beef and gravy or stuffed with fried oysters and shrimp. Pop’s Po’ Boys in the downtown area takes a modern, hipster approach to the traditional sandwich. Named for the local shrimping village, the Delcambre Dandy is to die for, with crispy shrimp, arugula and lemon-caper sauce. Wash it down with a French 75 cocktail or a Swamp Pop Old Fashioned.

Plan your trip in late winter or spring, and you’ll be just in time for crawfish season. Rice farmers flood their fields after the fall harvest to create crawfish ponds. Crawfish live underground, and when the ground is saturated with water, they crawl out of their burrows. From January to late May, you can indulge your craving for fresh boiled crawfish at local haunts like Louisiana Crawfish Time and Dwight’s, with dinner lines forming as early as 4 p.m. Holes are cut into the center of each table so patrons can simply push the empty crustacean shells into a waiting trashcan. 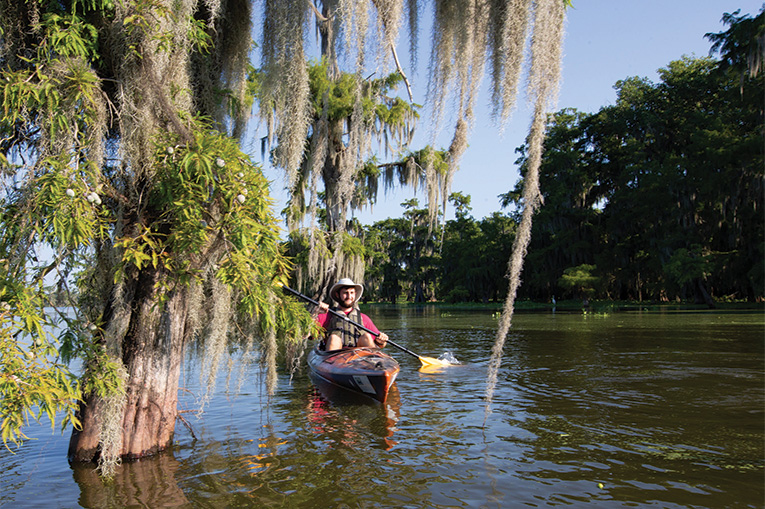 Take a peaceful kayak tour on Lake Martin during a stay at Maison Madeleine. (JANENNE DECLOUET)

“Picking crawfish is one of our best traditions,” says local Jenny Gautreaux, whose family has their own crawfish pond. “There’s just something special about sitting around for hours visiting with friends and family, picking crawfish and sipping a cold beer.”

Cajuns are also proud of their gumbo, and it’s not like New Orleans Creole gumbo with seafood, okra and tomatoes. Instead, their recipe consists simply of sausage and chicken in a dark roux. For traditional Cajun gumbo, a great choice is Blue Dog Cafe, which doubles as a gallery for the iconic paintings by Acadiana artist George Rodrigue. For gumbo with a silver spoon, Charley G’s steakhouse offers a velvety duck and Andouille gumbo.

All Cajun food tastes better with Tabasco. Add a little spice to your Cajun Country trip with an excursion to Avery Island, where Edward McIlhenny made his first bottle of hot sauce in 1868. Tour the Tabasco plant and visit the enchanting gardens around the estate.

After a day of eating and dancing, rest your head at Maison Madeleine, a bed and breakfast on the shores of Lake Martin. The 1840s cottage was restored to its original grandeur by owner Madeleine Cenac, who offers special activities like cooking classes, kayaking excursions and singer/songwriter dinners that always end in a festive fais do-do.

Your next fais do-do may be closer than you think. Frontier Airlines flies direct from Orlando International Airport to Lafayette.

PARLEZ-VOUS FRANÇAIS?
French Immersion is taught beginning in kindergarten and many natives speak a mixture of French and English known as Cajun French. It is not uncommon to hear popular expressions like cher bebe (how precious) and c’est bon (that’s good) as well as music sung in French.

LOCAL LORE
The Atchafalaya Basin is the country’s largest swamp. An Old French legend says the mystifying wetlands are home to a werewolf known as the loup-garou. To protect yourself, leave 13 coins outside your door—since the monster can’t count past 12.

SACRED GROUND
The Cathedral of St. John is one of the most spectacular Romanesque Catholic churches in the Southeast. The holy grounds include a 500-year-old oak tree and a raised cemetery to keep it above Louisiana’s high water table. saintjohncathedral.org