What’s next on your travel bucket list? An alien planet with a thriving eco-system or a joyful island in the vast South Pacific? Either is yours for the price of a theme park ticket.

Walt Disney World’s Pandora -The World of Avatar is a new land, completing Animal Kingdom’s transition to an after-dark experience, which is kind of like having a brand new park to explore. With Volcano Bay, Universal Orlando expands its fun with a water theme park. Both Pandora and Volcano Bay are meant for guests to linger and explore. Read on for a user’s guide to Orlando’s newest attractions and what you need to know to make the most of your visit.

Pandora The World of Avatar 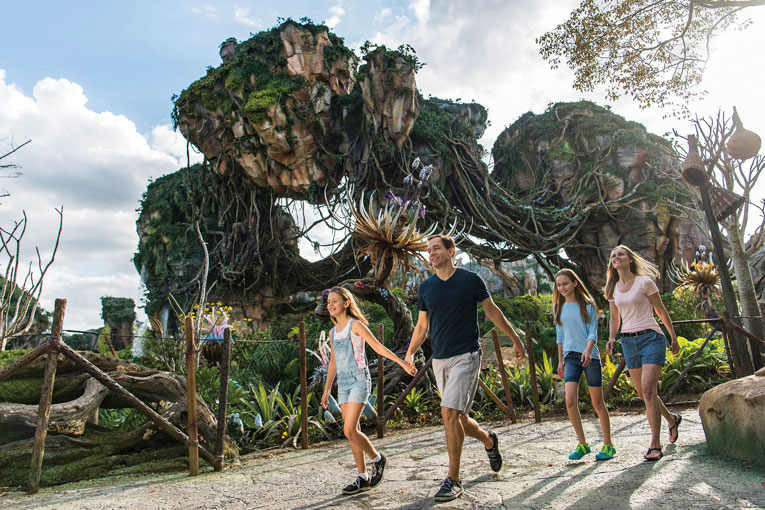 Floating mountains, cascading waterfalls, plants that look familiar yet are unlike any you’ve ever seen. Pandora–The World of Avatar is an immersive alien landscape and you don’t have to pay SpaceX to get you there.

Disney’s Animal Kingdom opened its newest “land” on May 27, completing its transition from a daytime-only park to offering an evening experience too.  And while there are no animal species that we know of from Earth, Pandora is a thriving ecosystem that has healed itself following a conflict with humans that left it utterly destroyed. You don’t have to have seen or know the film that inspired it to appreciate this exotic, completely immersive experience. When you are in Pandora, there is no crossover from the outside world. Even the airspace is filled with a layered landscape dominated by floating mountains that top out at 156 feet.

Cross the Discovery River to enter the Valley of Mo’ara, where an unrecognizable soundscape of chirps, grunts and howls by unseen creatures awakens your senses. First up is an oversized plant called the Flaska Reclinata that reacts to human touch, shimmering with a purple glow and spewing condensation. A bulbous blue plant seen on the riverbed is a Puffball Tree, which absorbs sodium from the soil, making its leaves a food source for the Na’vi.

The Na’vi, of course, are the 10-foot tall, human-like blue creatures with bright yellow eyes who live in the forest and keep to themselves. Signs of their presence are everywhere. Colorful woven totems, sculptural pictographs left by the Na’vi, are like token breadcrumbs to lead the way. A stylized blue figure with crossed legs is the Shaman of Song and is placed near the entrance to the Na’vi River Journey, one of two attractions within Pandora.

This is a peaceful and blissfully cool indoor ride with no drops, jolts or splashes. It begins in total darkness and emerges in a hyper-vivid rainforest replete with eerie bioluminescent creatures and plants. “Viperwolves” appear menacing until we see the cubs at play. Overhead, the shadows of six-legged frogs hop across oversized leaves. Pay attention and you may even see a Na’vi family traveling through the forest—downriver as you are—toward the Shaman of Song, whose melodic chant summons a feeling of well-being and harmony. 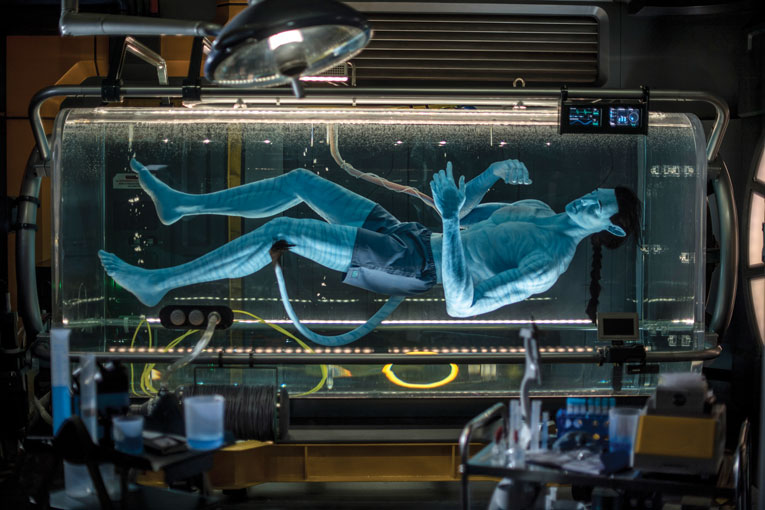 The ride exits in a corner of Pandora that is less traveled and whose layered landscape, a mix of tropical species from Earth and fanciful Na’vi plants (created by Disney’s Imagineers) is particularly enjoyable. Pause here and take it in, as you would in a botanic garden.

Long lines and a Na’vi totem of a banshee—an imposing winged beast—beneath a stone arch indicate you are near the blockbuster attraction, Avatar Flight of Passage. Riding a banshee is a Na’vi rite of passage, and this coming-of-age ritual is depicted through ancient cave paintings passed in the queue. A Fast Pass may save you hours, but you’ll miss some awesome storytelling details along the way.

SPOILER ALERT: On this ride, you are the human link whose brain controls an avatar—part human, part Na’vi—flying on the back of a banshee. Disney Imagineers aren’t yet explaining the technology, but you mount a device like a motorcycle, wear special 3-D glasses and then you are sent on a virtual reality flight through Pandora. Steep swoops make your stomach drop, wind blows in your face and water  sprays as you fly beneath a curling wave. After much excitement, your banshee lands and pauses in a cave; you hear and feel it catch its breath. Avatar Flight of Passage is truly sensational, and most riders say it is worth the wait (overheard: “I would have waited seven hours for that!”).

Pandora isn’t a land you walk through to reach its marquee attractions. Pandora is the attraction and is worth a visit by day and again after dark when the entire landscape is magically transformed with bioluminescence. Even the mountains slowly seem to come to life as you ponder your place in this alternate universe.

Dine at Satu’li Canteen, the former RDA commissary in Pandora from the time of The Great Conflict. A healthy “from the land” menu features a create-your-own Satu’li Bowl by choosing a protein, base and sauce. Steamed pods put a new spin on the cheeseburger and a vegetable curry. Chill out with a glass of red or white wine from Banshee Winery or a cup of green Hawkes’ Grog Ale (made from Na’vi-grown grains). Or have some blueberry cream cheese mousse, the most delicious blue dessert you’ll ever taste. You can order ahead using the My Disney Experience app. When you’re ready to dine, tap “I’m here” and your food will be prepared and ready at the pick-up window.

Pick your own banshee at Windtraders. Even at $50, it’s often sold out. The creature rides on your shoulder and its sound and movements are controlled by a leash.

Revive at Nomad’s Lounge. Need a place to park to wait for dark, before returning to Pandora? This hidden bar with travel-inspired cocktails and a bar menu behind the fine-dining Tiffins is practically a secret. There’s a covered terrace with sectional sofas you can claim for your gang, overlooking Discovery River and the bridge into Pandora.

Torrents, drops, rushing, gushing — and a new way to wait in line 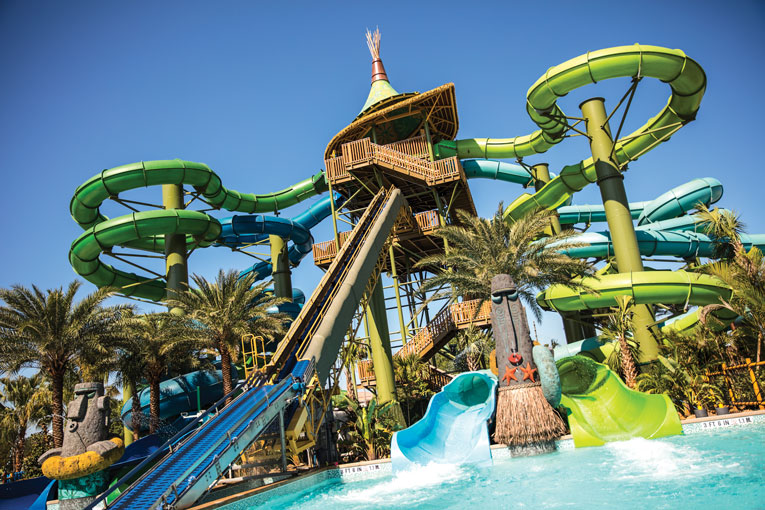 Torrents of water gush down the side of the near-vertical Krakatau Volcano, as seen from I-4. Yet, enter the gates of Universal Orlando’s new water theme park, Volcano Bay, and you couldn’t feel farther away.

The park tells the story of a fictional South Pacific tribe called the Waturi who journeyed through Oceania before making this imaginary island, dominated by its 200-foot volcano, their home. When the park opened on May 25, there were no speeches. Instead, a dedication ceremony played out on Waturi Beach with a Maori chief gifting Universal Orlando president and CEO Bill Davis a symbolic stone from the ocean off New Zealand’s coast. The moment was sealed with a hongi, the traditional touching of foreheads.

While the ceremony was a singular moment, it reflects the close attention paid by Universal Creative to get the details right. Of course, it can’t all be an authentic tour of the Pacific islands; this is a water park, after all.

Volcano Bay is dotted with towering, brightly colored slides and chutes; thatched-roof, open-air restaurants; and gift shops decorated with carved wooden masks and dense tropical flowering plants and trees. Sure, when climbing stairs to some of the attractions, you’ve got a bird’s-eye view of city streets, but once the thrill of the ride takes over, those outside views are forgotten and the sense of fun is as enveloping as shooting out of the Ohyah or Ohno Drop Slide into the glistening pool below.

Like Ohyah with its four-foot drop and Ohno with its six-foot drop, most attractions offer mild and wild options. Some offer the choice of riding alone or with others. Most slides are on a tube or a raft (which are sent back to the top on a conveyor belt) that manage to keep you on top. If your kids are anything like mine, they may start with mild but will race back for wild every time. Mom and Dad, grandparents too, you can—and should—do it all with the kids. Volcano Bay is huge family fun.

With its third theme park, Universal has rolled out a new way to wait in line: Your TapuTapu wristband does it for you. Guests tap the waterproof wearable against a totem at a ride’s entrance to set their virtual place in line. A display indicates the length of the wait and counts down by five-minute increments on the TapuTapu display screen until an “enjoy the ride” message appears, your cue to return. Be advised that with big crowds, wait times could be 2 hours or more, and online users report that once you return to the ride, you may still face a wait of 20-30 minutes.

Though the TapuTapu is lauded for being your placeholder in line, the downside is that you can only wait in one “line” at a time. So if you’re queued up for the Ko’okiri Body Plunge, a 70-degree drop through a clear tube from the top of the volcano, and the wait time is 90 minutes, you can’t ride anything else, unless there’s no wait (indicated by “ride now” on the digital display at the ride). 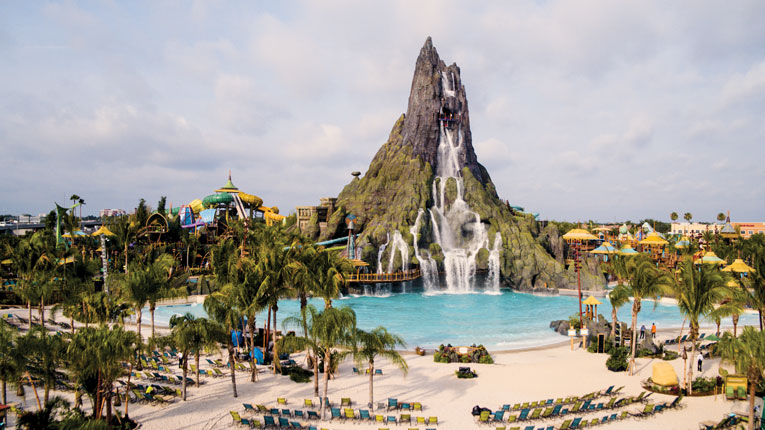 There is one exception: You can simultaneously queue up for the Krakatau Aqua Coaster, a roller coaster and water slide in one (it’s a blast!).

However, there’s plenty to do while your TapuTapu counts down your wait time. The most obvious is to enjoy the sprawling zero-entry wave pool. There’s also a lazy river to float on (Kopiko Wai Winding River) and an adventure river to ride on (TeAwa the Fearless River). Six signature-dining locations showcase different menus with a total of 60 dishes, including theme park staples such as burgers and island-inspired options like coconut curry chicken. The full-service open-air bar Dancing Dragon, with views of the beach and wave pool, will likely never have an empty seat.

TapuTapu does more than wait for rides. Create an online account via the Official Universal Orlando Resort app and link your credit card to use TapuTapu as your wallet while in the park. It also becomes your locker key and photo pass. You can even set spending limits for others in your party who are on your account.

Park admission is $67, and $62 for kids ages 3-9, but there are two versions of the Universal Express Pass that let you skip the TapuTapu part of waiting in line, and allow you to directly enter a ride’s line (where wait times are reported to often be around 20 minutes). For an upcharge of $20, the Universal EXPRESS PASS lets you ride every attraction once. The Universal Express Unlimited Pass is $40 and gives you unlimited access to every ride.

Buy some shade. Premium chair service starts at $30 and gets you a pair of private cushioned loungers with adjustable shade, a lockbox and an attendant who provides fresh towels and food and beverage service.

Wardrobe Warning PSA. Ladies, consider carefully these two words: board shorts. Lifeguards help you dismount from the rafts at the bottom of each slide and it isn’t graceful or pretty.

Considering a staycation? The two new towers at Cabana Bay Beach Resort are practically in the water park. CBBR has a dedicated entrance for guests about 20 feet from the main gate of Volcano Bay.