The Sport of Kings

Make plans now. There is simply no better way to spend a Florida winter afternoon. 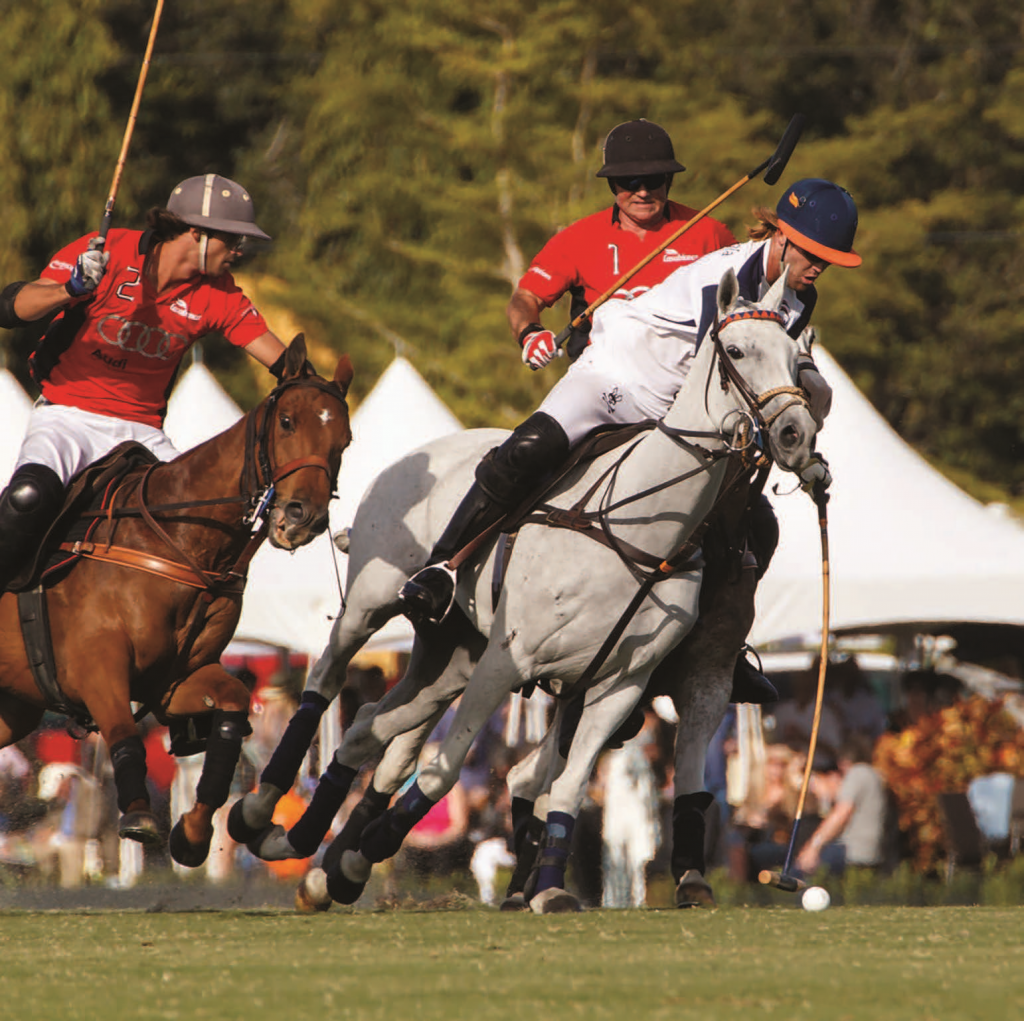 Players and ponies take to the field for a bout of fierce competition, as a match is underway at the International Polo Club Palm Beach in Wellington.

This story originally appeared in Where Gold Coast Guestbook in March 2020.

The sun rises over the lush, impossibly green landscape of western Palm Beach County. This is horse country, as is evident from an aerial view of the land that reveals perfectly carved-out, verdant squares and rectangles, bordered elegantly by hedges and neat fences. Stables resembling mansions dot the land, serving as posh anchors to paddocks. Here, thoroughbreds frolic as their trainers watch and their owners dream.

Beyond the equestrian estates and horse farms in the Village of Wellington lies the International Polo Club Palm Beach, the epicenter of polo activity each winter, where enthusiasts descend each season to enjoy perfect South Florida weather, and to watch some of the most thrilling matches the sport has to offer.

And it seems it was destined to be so. From the beginning of the sport, polo has been within the sphere of the elite. While polo began its ascent to prominence in Great Britain and the United States during the nineteenth century, its roots reach much further back into ancient history. Reportedly, the Persians first played the game sometime between the sixth century B.C. and the first century A.D., when the competition served as a training exercise for the king’s guard. The sport grew to be played by Persia’s nobility, including women. From Persia, the game spread across Asia as far as China. Eventually arriving in India in the thirteenth century, it wasn’t until the 1800s that 5 British tea planters in Assam would adopt the game as their own around 1860. In 1876, American sportsman and Publisher James Gordon Bennett witnessed his first match in England, and brought it home to New York. 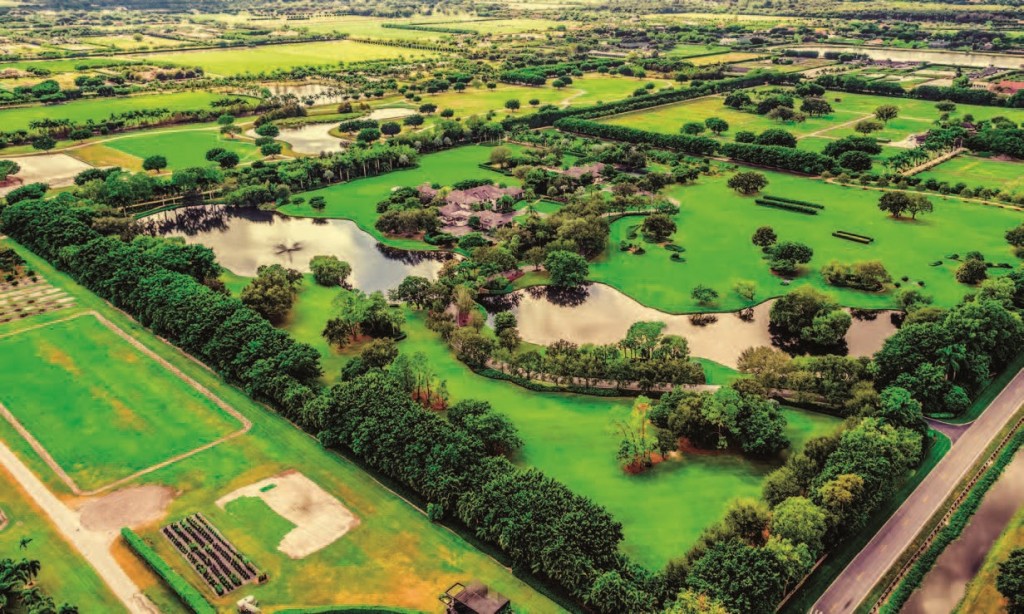 An overhead view of IPC

The United States entry into the polo fray opened the door for international competition, as the U.S. challenged Great Britain to a playoff in 1886. The dawn of international tournaments necessitated uniformity of rules, which survive until today. The game is played with four players on each team, who are mounted on ponies (full-sized horses, actually.) Teams score by hitting a ball with long wooden mallets between goalposts at each end of the field, which spans the length of nine football fields. Games consist of six periods, called chukkers, which last 7 1/2 minutes each.

As the Gilded Age brought development to South Florida, wealthy northerners flocked to the area to winter in style. Naturally, they brought their pastimes with them, and in 1923, the elite Phipps family of Palm Beach helped to found the Gulfstream Polo Club, the first polo club in the area, near Delray Beach. Play continued up to the time that World War II took center stage, thus abruptly ending the sport’s growth on the Gold Coast.

However, players eager to return to the game ensured that it continued after the war, and polo, as well as other equestrian pursuits, have enjoyed a strong following in the area ever since. 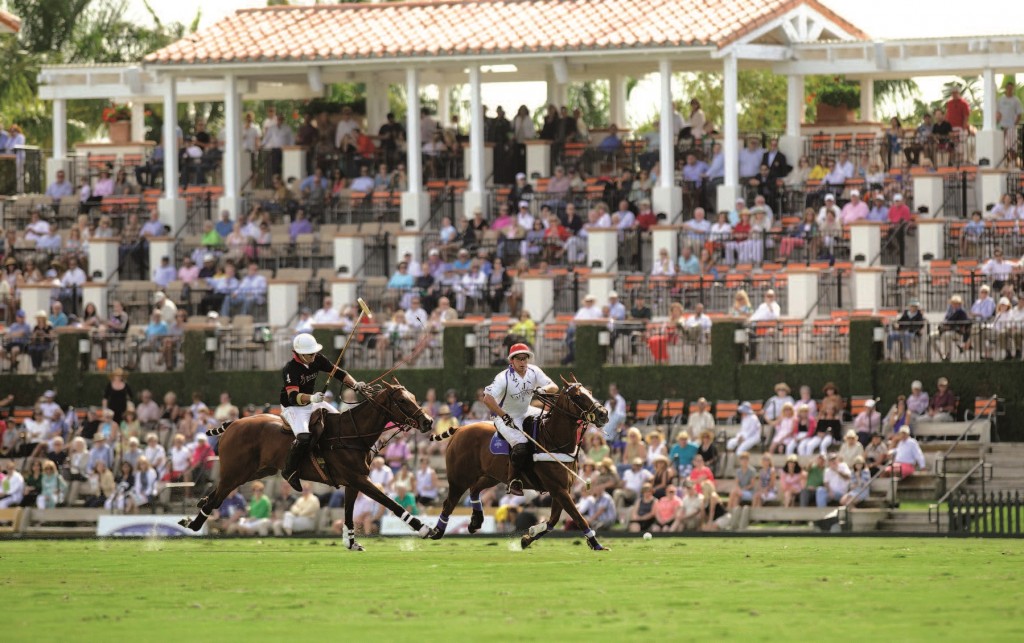 Play in front of the Pavilion.

Today, much of the excitement revolves around play at the International Polo Club Palm Beach (IPC) in Wellington during the winter months. The club, the largest polo facility in the country, is the epicenter for a packed season of matches and tournaments. Regular season play typically kicks off at the end of December and runs through late April. Matches, played on lazy Sunday afternoons at 3 p.m., are open to the public, and offer a wide range of ticket pricing. Nearby Grand Champions Polo Club also hosts free matches January through April.

Comprising a large part of the regular season, the Gauntlet of Polo at IPC offers world-class play as teams battle for three cups-the C.V. Whitney Cup, the USPA Gold Cup and the U.S. Open Polo Championship. For the team who consecutively sweeps all three cups, there is a $500,000 bonus at stake. Other competitions of note include the U.S. Open Women’s Polo Championship Final as well as The Lexus International Gay Polo Tournament, which includes a full schedule of fundraising galas and other events, in addition to tournament play.

Of course, anyone who has seen the film “Pretty Woman” or has engaged in a level of royal watching knows that the match taking place is only half the fun of a polo outing. Fashion and food also play a big part in the gathering, as “who” you are wearing off the field becomes as important as who is winning on it. Spectators should come dressed to impress.

Food and beverage offerings enhance the experience; after all, what is a match without a glass of bubbly in hand? At IPC, full service bars are situated conveniently close to the field, ensuring a steady supply of Champagne, Bloody Marys and more. The Pavilion also offers a Champagne Sunday Brunch, with tables located in view of all of the action, as well as an ever-changing spread of sumptuous options, scattered at stations throughout the space. And if your tastes run to tailgating, that’s also an option. The club even offers tents that are available for rent for just such an occasion, which also include 12 tickets for each match.

While observing the game and even learning to play it are the purview of the area’s polo clubs, The Museum of Polo and Hall of Fame offers polo enthusiasts an opportunity to take a deeper dive into the history of the sport. The nonprofit organization seeks to educate the public on the importance of the sport’s history, and to highlight the real driving force behind a player’s success-the relationship between the rider and his or her horse.

Experience It For Yourself

Attending a polo match while visiting the Gold Coast is a terrific opportunity to gain a glimpse into this exciting sport that, for centuries, has been the arena of the affluent, with the added benefit of celebrating a pastime that’s woven into the very fabric of South Florida. There is simply no better way to spend a Florida winter afternoon.