The Smartphone: Don’t Leave Home Without It

But with an e-wallet on an Android device you can leave your credit cards behind.

Just like your smartphone has become the repository for your photos and music, it soon will replace your credit cards. Google has made the first e-wallet push with Google Wallet, debuting with the Sprint Nexus S 4G and coming soon to other Android phones. Google Wallet phones can be used to wirelessly authorize purchases at more than 140,000 MasterCard PayPass merchants in the United States.

Though the service is still in its infancy, dozens of businesses across Orlando already support Google Wallet, including numerous CVS and 7-Eleven locations. Availability will continue to expand, given Google has already forged partnerships with Macy’s, Toys R Us, Radio Shack, Sports Authority and Jamba Juice, with Subway, Chevron and other merchants soon to follow.

Google Wallet relies on a wireless chip in your smartphone that utilizes near-field communication technology. It currently supports Citi PayPass-eligible MasterCard credit cards and the Google Prepaid Card, with support for “all the cards you keep in your wallet” promised in the future.

I’m all for my smartphone helping me reduce the size of my wallet. But when it comes to using it as a giant credit card, I’m more than a little bit concerned about security. Thankfully, Google knows this, and payment credentials are stored securely on a special isolated chip contained in the Nexus S 4G, and a unique PIN number must be entered to authorize transactions. 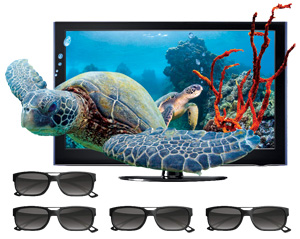 Change of View on 3-D Glasses

As 3-D struggles to catch on in the living room, HDTV makers LG and Vizio have switched from expensive active-shutter 3-D glasses to cheaper passive ones, much like movie theaters use.

Battery-powered active-shutter glasses cost more than $100 and can’t be used with another manufacturer’s TV, leaving Panasonic, Samsung and Sony as expensive options for a 3-D viewing party. Active-shutter glasses include complex circuitry to dim each lens, making them heavier than passive glasses. And some users say the active switching causes headaches, though I have not experienced this problem.

These concerns have prompted LG and Vizio to adopt lighter, battery-free passive glasses that are more like a specially designed pair of polarized sunglasses. But there is a trade-off: Passive 3-D produces a lower-resolution image, while active-shutter is true high-definition 1080p. However, most people won’t notice the lower resolution of passive 3-D.