The Pet Guide: Orlando Dogs Get Their Day in Court

Six-year-old Tonx, a Golden Labrador mix, follows Cindy Frongello into an Orange County Courthouse deposition room, sitting next to a young girl being interviewed by attorneys. The child, a victim of abuse, reaches for Tonx whenever she gets upset or embarrassed. She stares at a picture pinned to his vest, takes a deep breath, and provides the details needed for a criminal investigation. Tonx delivers a calming sense of comfort and security, which allows the child to tell her story during this stressful, sensitive interview.

Frongello, a psychologist, and Tonx work together as a highly trained Courthouse Facility Dog team, part of the K9th Circuit Therapy Dog Program. The program’s goal: to provide therapy dogs to victims, especially children, who must testify in court or undergo forensic interviews, easing their stress and fears in the traumatic process. In addition to helping children in cases of abuse, abandonment, and neglect, K9th also assigns therapy dogs to special needs individuals and adult victims of violent sexual offenses.

Launched in November 2014 by now-retired 9th Circuit Judge Thomas Turner, the K9th program addressed the need for trauma-sensitive courts. Today, it’s a collaboration among a variety of partners, including the State Attorney’s Office, the Public Defender’s Office, the Department of Children and Families, the Guardian Ad Litem program, and several local agencies. When a victim needs a therapy dog and the request gets approved, he or she is assigned a therapy team consisting of a trained dog and its handler. Then the parties meet to ensure a bond develops between the victim and the dog before they appear in court together.

The Ninth Circuit uses both Tonx—who is professionally trained and a facility dog certified by Assistance Dog International—as well as an all-volunteer nonprofit organization called Companions for Courage. CFC, which is based in Eustis, provides free pet therapy teams, with a motto of “helping kids conquer their fears in the courtroom…one paw at a time.”  Each team consists of an owner/handler and his or her pet. Joanne Rittenhouse, president of the nonprofit, says all pet therapy dogs are registered and certified through the Alliance of Therapy Dogs and have been active therapy dogs for at least two years before being accepted into CFC. 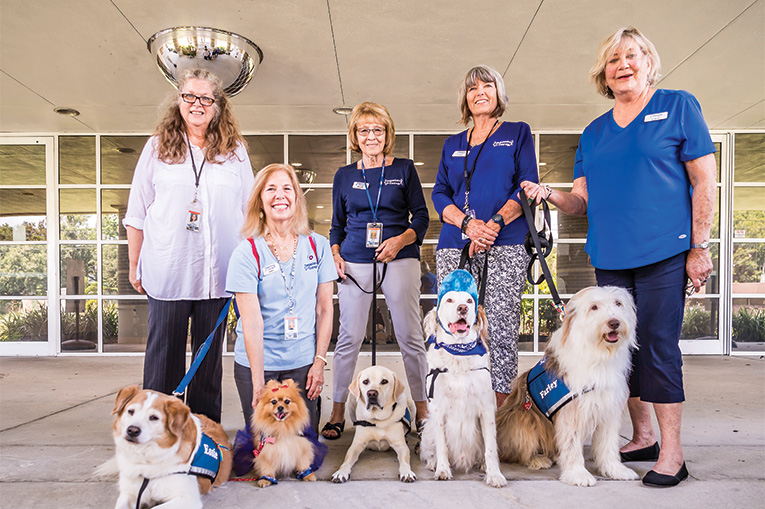 Companions for Courage employs many breeds of dogs to help kids conquer their fears in the courtroom. (ROBERTO GONZALEZ)

Beyond basic obedience training, therapy dog training involves being exposed to a variety of people (such as elementary school children, hospital patients, and disabled seniors) and visiting public settings (such as nursing homes, libraries, and hospitals). This gets the dogs comfortable with everything from wheelchairs to large crowds to touchy kids.

“We like to say our dogs are bomb-proof,” says Rittenhouse, citing how the stoic dogs don’t react to loud noises, sudden movements, or other distractions. This comes in handy during trials, when anything can happen in a courtroom.

There’s no particular breed that CFC looks for. Their therapy dogs include an American Akita, a Boxer, Doberman Pinscher, Pomeranian, and Sheltie/Poodle mix. It’s all about having the right temperament—obedient, sociable, gentle, affectionate, and patient. Rittenhouse points out that sometimes the dogs sit in the witness booth for hours. “We want a dog that isn’t fidgety, isn’t nervous, can just sit and relax for hours, and doesn’t mind being touched,” she says.

With a roster of 16 pet therapy dogs, about a dozen of them work in the 9th Circuit, as some of the volunteers live too far away to travel regularly to Orlando. So, CFC tries to make the best match for each case, rotating the dogs on assignments as needed.

In the case of Tonx, the K9th program is tapping the services of a ADI-certified facility dog that has undergone more rigorous training. These animals also have public access granted through the Americans with Disabilities Act, while pet therapy animals must be invited into a public place. During their 10-month training period, dogs like Tonx learn more than 40 commands and submit to a screening process to ensure they’ve got the right temperament (calm, observant, tolerant). Then they are assigned to a handler working in a facility, such as a hospital, child advocacy center, or visitation setting (such as a courtroom), where they spend two weeks together learning to work as a team. Tonx and Frongello must recertify annually through Canine Companions for Independence, which retains ownership until Tonx retires; then Frongello can choose to adopt him.

“My partnership with my working dog is so unlike just having a pet,” explains Frongello. “They’re purpose-bred by CCI to be a service dog.”

No matter which K9th dog shows up at the Orange County Court House or Juvenile Justice Center, the result is the same—the canines help a victim provide critical testimony in legal proceedings.

As the caregiver of one special-needs victim, Carol Feiner of Orlando can attest to the power of the pups. “I was the girl’s guardian, and I found out that she was raped at her job when she was 22,” recalls Feiner. “It was horrible. She’s a special-needs adult with intellectual delays.” Fearful that these men would hurt her again, the young woman did not want to press charges or go to court.

To the rescue: therapy dog Karl, a deaf white Boxer trained to recognize over 90 American Sign Language signals. Rittenhouse, Karl’s owner/handler, arranged a meet-and-greet. “She clung to Karl for dear life,” says Feiner. Finally, the victim felt safe enough, empowering her to begin the process of depositions. “It was hard for her to even get out of the car at the courthouse, so Karl would meet her and walk her to a quiet place to calm her down before the depositions,” Feiner says.

With his quiet presence, Karl gave the woman the courage she needed to speak her truth. He accompanied her into the witness box, lying at her feet while she testified. She took her shoes off and rubbed her feet against his fur during the trial, giving her the strength to answer questions and face her attackers. In the end, Karl restored the woman’s self-confidence and renewed her trust in people.

“The K9th program has been a great experience, and I know she would not have been able to get through this process without Karl,” notes Feiner.

When the K9th dogs are “off the clock,” what do they do? Since the therapy dogs are pets, they belong to their owners and go home with them. They relax, go for a walk, and play—just like any other dog. Although Tonx is a facility dog (not a pet) and Frongello is his handler (not an owner), he still lives at home with her.

“Tonx’s vest is a signal to him that he’s working,” says Frongello. “But the minute I take it off, he knows he’s off-duty and goes into the backyard to play with my two pet dogs.”

After a long day at work, these K9th pups have certainly earned some down time.

In 2017, the Florida Legislature passed House Bill 151, known as Justice’s Best Friend Act. It  authorizes judges to allow children in proceedings involving abuse and neglect and intellectually disabled persons to have therapy dogs and facility dogs present for court proceedings as a way to reduce trauma and facilitate testimony.