Journeys through time with our besties.

From the time Longwood resident Maegan Bogue was pregnant with Lorena Mae, her Boxer, Bruno, “used to put his head on my belly. From the moment we brought her home, he’s been attached to her.” The feeling is mutual. “Her first words were, ‘Hi, Bru,’ ” Lorena’s mom shares. Bogue recalls a cat they once had that claimed 8-year-old son Christopher as his favorite human. “It was Christopher’s cat. Bruno is Lorena’s. She just loves him. He’s her favorite thing.” Bruno, whom Lorena now calls “A-Bru,” is especially attentive at mealtimes, when Lorena slips him table food. “I’ll say, ‘Where’s your cheese?’ ‘A-Bru.’ ‘Where’s your cookie?’ ‘A-Bru.’ ” For the past year, the 2-year-old has been in charge of feeding Bruno his own food. “It’s very cute,” Bogue says. Bruno puts up with being sat upon, getting his ears pulled, and having a toddler intruder in his cage. “They’re always together. She dresses him up. He gets bows around his ears. He lets her do any and everything.” 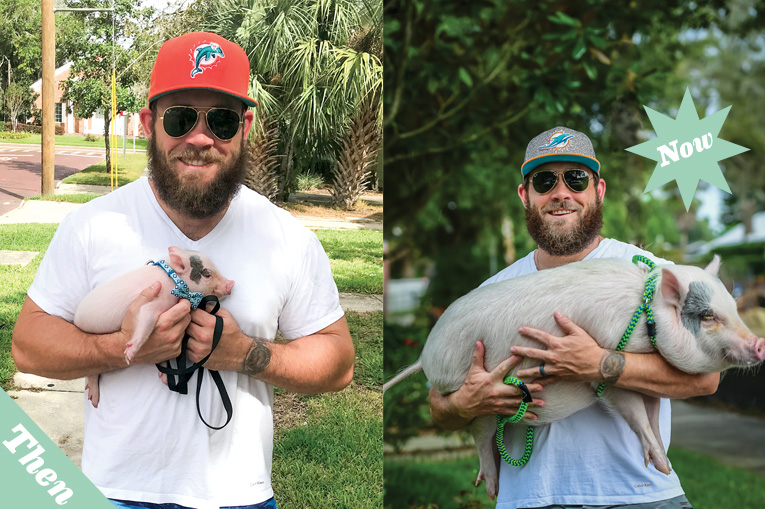 Chris Corn knew what he was getting into when he and Regan Stapleton decided to embark on a life together. “I have wanted a pig my entire life,” Stapleton says. Corn adds, “I knew to have a wonderful, healthy relationship with my wife, I was eventually going to have to get a pig.” Baberham Lincoln joined the family in September 2017 at just a few weeks old. Two months later, the miniature Vietnamese pot-bellied pig attended the Orlando couple’s wedding at Lake Eola. “It’s honestly probably more like having a toddler than having a dog because he is that intelligent and likes attention,” Corn says. But with intelligence comes a penchant for mischief. “That’s why I have spent a small fortune on puzzles and toys. He likes to figure things out,” Stapleton says. One thing he’s figured out is how to manipulate the couple into giving him treats. But show Baberham a plastic fork—something they keep in pots around the house—and he’ll flop over for a belly scratch. “It’s funny and it’s cute,” Corn says. 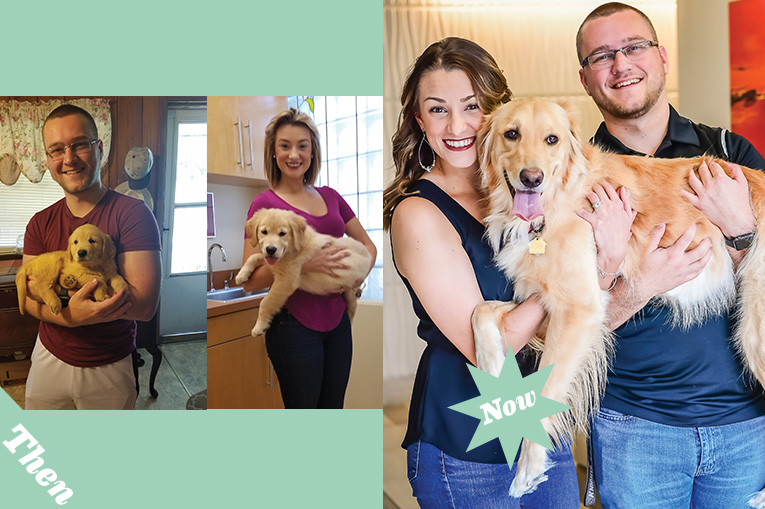 Alyxandra Stuelcken and her fiancé, Ty Wagner, might have been searching for a Golden Retriever puppy when they visited an Alabama breeder two years ago, but the puppy they ended up taking home “actually chose us,” Stuelcken says. “We were playing with the puppies, and she wouldn’t leave us alone.” The dog’s name, Kyla Rose, was inspired by the Star Wars villain Kylo Ren. But Kyla Rose is no villain. “She’s a big baby. She thinks she’s a lap dog,” says Stuelcken, an Apopka resident. “My fiancé didn’t even want a dog, but I’m pretty sure he loves her more than he loves me.” But the love triangle gets more complicated because Stuelcken is actually Kyla Rose’s favorite person. “She’ll never leave my side,” her favorite human says. If Stuelcken shuts the door to get some space from her constant companion, Kyla Rose jumps on the door to try to open it or knock it down. At the end of the day, the 60-pound dog “sleeps between us like a person under the blanket,” Stuelcken says. “She’s just a big cuddle bug.” 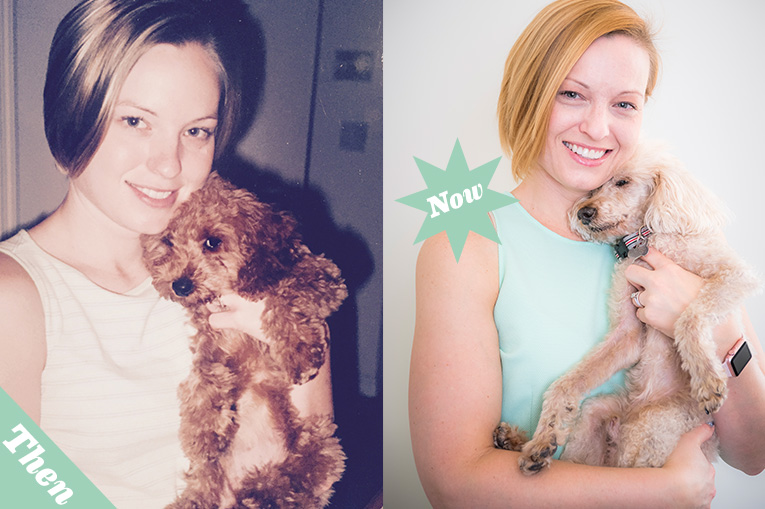 Fifteen years ago as newlyweds, Orlando magazine associate publisher Kristin Merrick and her husband, Robert, became the parents of what Kristin calls “my furry baby,” a miniature poodle named Barkley. “I actually grew up with a poodle,” Merrick shares. “I’m allergic to dogs, so having a poodle works out for my crazy allergies.” When daughter Parker joined the family nearly nine years ago, “he was very accepting of her,” but he remains a mama’s boy. “He loves her, but if he’s following someone around, it’s me,” his chosen human says. Barkley likes to be in Merrick’s lap or at her side and insists on sleeping with her each night. “It’s a very crowded bed between my daughter coming in and the dog,” she laughs. Sometimes the 12-pound pup, whom Merrick says is “like an old man,” hangs out in the Orlando magazine office while Merrick works. “We were going to call him our morale officer,” she says. During car rides, “he has to be in my lap. If he’s in my lap, he’ll ride for hours.” 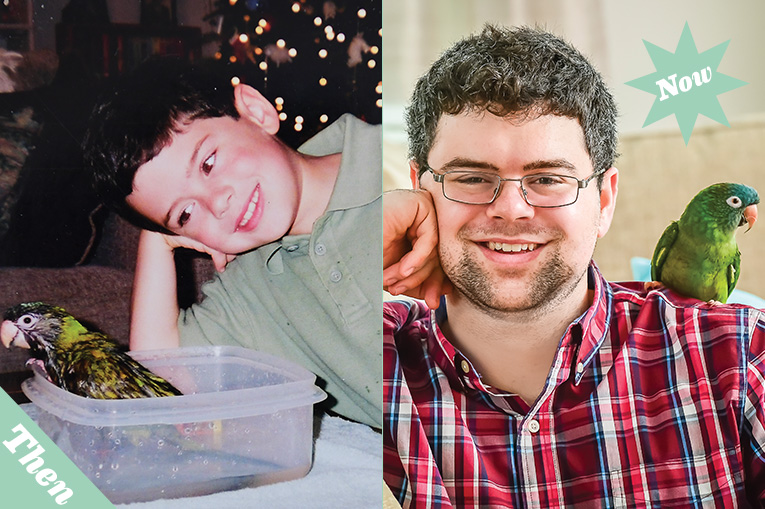 Tyler Glenn, son of Orlando magazine editor Barry Glenn, was 7 years old when his parents brought home a baby blue-crowned conure they named Oliver. At first Tyler was afraid of the bird, who has a penchant for biting. “But before long he began to handle Oliver, and it was clear the bird adored him,” recalls Tyler’s mom, Terry Godbey. “Oliver would have stayed on Tyler’s shoulder 24 hours a day if he could.” Seventeen years later, the pair still has an unbreakable bond. Tyler laughs at the way Ollie squeals when he kisses the bird’s head. “It’s almost as though he is trying to mimic the sound he is hearing,” says Tyler, who admits his bird “can be a bit of a diva. If we are in the same room as him and clearly not looking at or talking to him, he usually takes exception by way of loud squawking.” Tyler says Ollie enjoys being around people and destroying paper towel tubes. “It’s almost like his stress ball,” Tyler says. 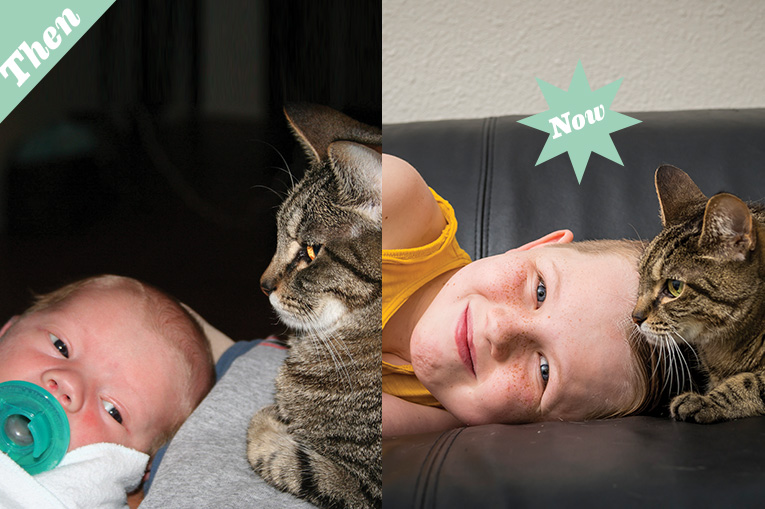 Gibbs, a diminutive tabby, had been a fixture in the Walters’ home for four years by the time Catherine and Christopher’s oldest son, Joe, arrived nine years ago. “She’s my very first pet,” shares Catherine, Orlando magazine’s director of marketing and circulation. “I had no idea an animal could be so sweet.” When the couple brought Joe home, Gibbs’ first response was to give the invading human “this stink face.” But Gibbs quickly warmed up to Joe, who has since been joined by 3-year-old brother Jack. “She would panic when Joe cried as an infant. She would try to sleep in his crib,” Joe’s mom recalls. Today Joe, who is on the autism spectrum, says, “She’s my best friend. I love her. She makes me smile.” The cat will sit in Joe’s lap during the day and sleep in his bed at night. When Gibbs is feeling playful, “she likes to play chase,” Joe says. “Joe craves stability,” says Walters, who attests to Gibbs’ saintly nature. “She’s a calming influence for him.” 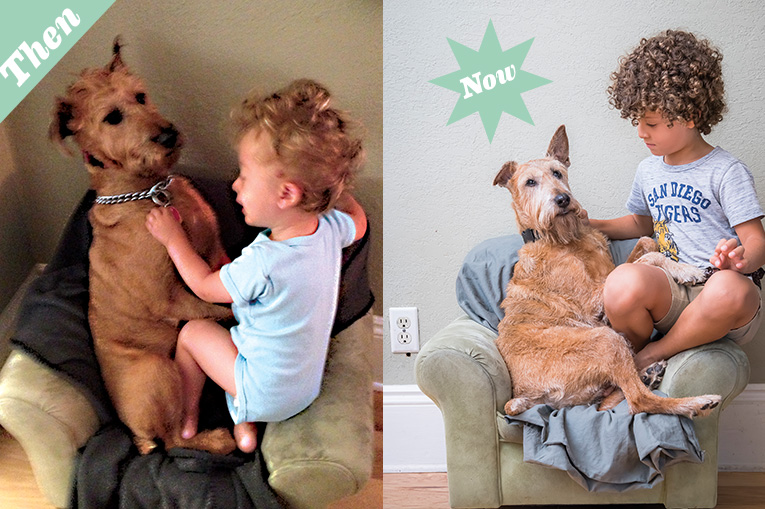 Though Orlando residents Erin and Rob Hearn had three dogs when their son, Finn, was born, it was Silly the Irish terrier who “was always by him. She was kind of like, ‘If anyone is going to come at him, they have to get through me first,’ ” Erin Hearn shares. Silly and Finn—now 13 and 6, respectively—learn from each other. “She has definitely gotten more patient with him. He is learning patience, how to be kind,” Finn’s mom says. “He’s learning about life, and she’s somebody he can learn from.” Finn loves all three dogs, who are all about the same age, though it is Silly—so named for her goofy, scruffy beard but pronounced SEE-ly—who prefers Finn. “She’s like a big sister to me that stinks,” Finn says. Though Silly is a senior citizen, she and Finn still enjoy playing together. Finn says he likes to “play chase with her now that I’m faster than she is,” and that he appreciates she cleans up his messes at mealtime.