With anxiety at the root of many pet behavioral issues, veterinarians handle the problem patients with great care.

Even as a puppy Rugby’s fear and anxiety before visiting the vet were off the charts, his owner says. And, over the years, his condition worsened.

“First, he had a muzzle, then we had to put a blanket on him just to get his annual checkups and vaccines,” says Kris Whipple, a former education coordinator for Disney, who now has her own business in Naples. “Eventually, we went to sedation, but as Rugby got older, I got concerned, given the possible health risks.”

So, about three years ago, she began scouring the Web for veterinarians who treat behavior problems. That’s when she found Dr. Lynn Honeckman, the owner of Veterinary Behavior Solutions in Kissimmee.

In an initial “interview,’’ Honeckman observed Rugby’s behavior and interactions with his owner, as he romped for 90 minutes inside her office, “A Disneyland for dogs,” Whipple says. “It’s a huge space filled with toys and treats everywhere.” Her Australian Shepherd/Corgi mix— all 50 pounds of him—apparently ate every treat, played with all the toys, then promptly fell asleep in the middle of the room. 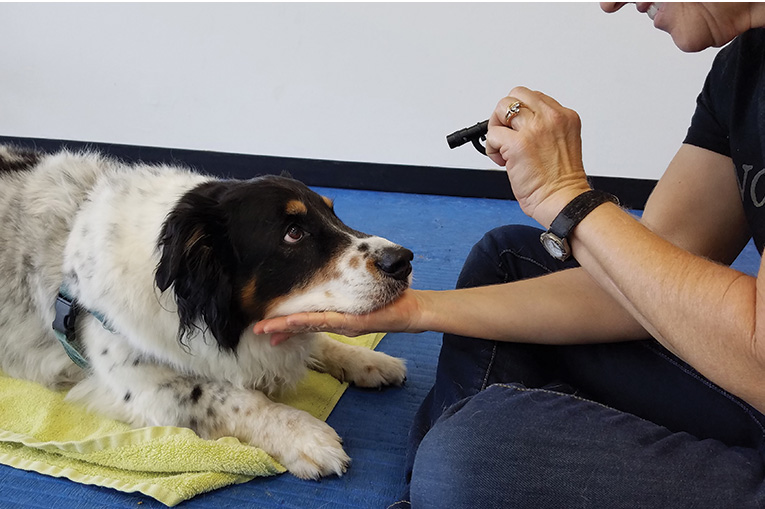 Rugby, an Aussie-Corgi, is overcoming his anxiety issues. (KRIS WHIPPLE)

After ruling out medical problems, Honeckman diagnosed the now 10-year-old dog with clinical anxiety, a broad term that can show up in many ways and with many ‘triggers.’ ” Among those that veterinarians typically see are unfamiliar noises, fear of other animals, the cold sterility of the examining table and, in Rugby’s case, even the sight of a white lab coat.

Besides fear aggression during veterinary visits, Honeckman says, she found that Rugby suffered from fear aggression with unfamiliar people and toward unfamiliar dogs, as well as phobias related to storms and noise. “But he’s made amazing progress” in the past year or so, she says, especially now that he goes to a “fear-free” veterinarian in Naples who minimizes things that make Rugby afraid and adds in treats and toys that he likes.

Exactly how many dogs and cats in the United States suffer from similar fear-based anxiety or other behavioral abnormalities is unknown. However, the American Animal Hospital Association suggests that it’s a growing concern, too often leading to pets’ euthanasia, relinquishment or abandonment. In its most recent guidelines for managing behavioral problems in dogs and cats, the association emphasizes the need for modern veterinary practices to treat these problems as an essential “core competency”—part of every animal’s annual health exam.

At the root of many, if not most, of the behavior problems that veterinarians see is anxiety, says Dr. Terry Curtis, a clinical behaviorist at the University of Florida’s College of Veterinary Medicine in Gainesville. Curtis is one of three board-certified veterinary behavior specialists in Florida and one of just 74 worldwide, according to the American College of Veterinary Behaviorists. (Board certification requires four years of additional education and training beyond medical school, as well as board exams.)

“Anxiety is a huge and broad term, but it’s typically broken down into specific diagnoses,” Curtis says, ticking off a possible list that includes storm anxiety, crate anxiety, separation anxiety or anxiety-based aggression. Pet owners often seek specialists’ advice, she says, when these behaviors lead to property destruction, urination or defecation inside the home, or extreme aggression.

In general, veterinarians see many cats and dogs that react with fear and anxiety only to isolated events, such as thunderstorms or fireworks displays, then return to their calmer selves. But others, like Rugby, suffer from chronic, underlying fears that may be related to early trauma or abuse, lack of proper socialization, or nutritional and environmental factors, which studies now show can even alter a pet’s DNA.

“It could be that the mother has nutritional problems when she’s pregnant,” adversely affecting early development, Honeckman says, or perhaps socialization fails to occur when it should. For kittens, she says, “socialization begins as early as 7 to 14 weeks and if they don’t get good socialization during this time, they may become fearful.”

For Rugby, the root of his distress remains uncertain. But his owner suggests that it might go back to the day she adopted him.

“He was the last one in his litter to be adopted, just sitting all alone in the dark, looking sad,” Whipple says. Although her family intended only to foster him briefly, “he was so adorable, our resolve lasted less than a day.”

Whatever the reasons for Rugby’s angst, the likelihood that it goes back to puppyhood is not considered unusual, given that most pets that develop behavioral issues do so between ages 1 and 5, according to veterinarians. Pet owners should seek early intervention, if possible, they say—usually a multi-pronged approach including both medication and behavior modification to redirect negative behaviors into positive ones.

“No one treatment is right for every dog or cat,” given the many ways troubling or annoying behaviors can arise, says Dr. Lauren Prather, a Winter Garden veterinarian. “It always takes time to figure out what’s wrong.”

Sometimes, aggressive behaviors develop in unlikely animals, she says. “Even a great Lab from a great breeder still can have anxiety-induced issues.” These are real clinical disorders similar to what are seen in people, she adds.

Like other veterinarians, Prather first rules out medical reasons for a dog or cat’s pain and discomfort, then delves into a personal history about length of ownership, where a pet has been purchased and how long the undesired behavior has existed. She and others attribute the rise in separation anxiety they see in many pets today to loneliness, as dual-working families leave their pets home alone all day.

Even parrots left by themselves too long pluck out their feathers in distress, she says. “They get bored. Wouldn’t you?”

As a general veterinary practitioner, Prather says, she does refer pets to behavior specialists if the animal’s issues seem intractable after treatment “and everyone’s frustrated.” And she supports the need for more specialists in the future, she says, although she has high praise for local trainers who often help her channel pets’ behaviors into more desirable directions.

Dr. Honeckman, too, envisions a growing need for these specialists, so much so that she’s three years into seeking her own board certification.

A lifelong animal lover who owns a cat, a dog, one chinchilla and three gerbils, she began specializing in behavioral issues in 2011, at first offering in-home consultations throughout Central Florida, then branching out to a bricks-and-mortar building of her own last year.

She summarizes how animals’ anxiety manifests itself as coming down to “four F’s”—fight or flight, fidget or freeze. “Some animals attack, others flee, some stay put and others bark at everything that moves,” she says.

Although intimidation tactics once prevailed in the veterinary profession, Honeckman says, those approaches have begun to yield to more humane practices, exemplified by the national “fear-free” movement. It aims to make veterinary offices more inviting to pets, often using sedatives or pheromones, for example, rather than muzzles or restraints, during clinic procedures. The initiative, started by Dr. Martin Becker, a veterinarian in Washington state in 2016, now provides certification to professionals after 12 hours or more of online instruction.

In her own practice, Honeckman sets a simple goal, for now: She wants “better pets, happier pets” and ones with better relationships. “I want to see Fluffy 2.0,” she laughs.

But, her ultimate goal is no laughing matter.  “I want to prevent pets from being re-homed or euthanized because of behavioral issues,” Honeckman says. “Most anxiety and fear are things animals can’t control. It’s not the animal being bad.”