The Path of Kahn

Zurich, Paris, Los Angeles—Patrick Kahn has had many stops on his visual arts journey. Now he is bringing the works of master photographers to Orlando through his Snap! Space gallery and an annual festival.

Michael McLeod,
“If you are lucky enough to have lived in Paris as a young man, then wherever you go for the rest of your life, it stays with you, for Paris is a moveable feast.” —Ernest Hemingway

If anyone knows what Hemingway meant by the statement above, it’s Patrick Kahn. Sometimes it even looks as though he takes the sentiment literally.

Kahn is the creator and curator of Snap! Space, a nonprofit gallery in the Mills 50 neighborhood devoted to bringing the images of national and international master photographers to Orlando.

Born 57 years ago to a Swiss-German banker who spoke five languages and a French woman who was a devoted art collector, he spent his formative years shuttling back and forth between Zurich and Paris. There was no doubt as to which of the two cities would leave the more indelible impression.

Zurich is nice. Take the kids. But Paris is Paris.

As a young man Kahn would while away afternoons watching classic art films at the legendary La Cinémathèque Française or haunting the city’s museums, galleries and newsstands. He scribbled comical sketches of his own and idolized the irreverent editorial cartoonists of satirical publications such as Hara-Kiri. Not until he moved to the United States, first to earn a marketing degree from Boston University and then to create his own Los Angeles design studio, did his interest in the visual arts shift to photography.

He began publishing a chic coffee table magazine devoted to fashion, art and celebrities called The Book LA, and wound up building a rapport with the photographers featured on its pages. They included Douglas Kirkland, famous for his iconic photos of the likes of Marilyn Monroe, Audrey Hepburn and John Lennon;  and Gregory Colbert, who would become known for staging dreamlike images of humans and wild animals posed in primal, near-mystical rapport.

In 2004, Kahn began leading a double life, shuttling between two cities once again, though the back and forth wasn’t nearly as much fun this time around. It wasn’t the commute. It was the culture shock.

His American wife, Holly, a University of Central Florida art history graduate whom he had met in Miami, convinced him to move to Orlando from their home near Santa Monica Boulevard to give their two children a more peaceful upbringing. Soon Kahn was flying monthly between Los Angeles and Orlando, trying to keep his design studio afloat from afar.

He had spent his life gliding from one high-culture capital to another with Gallic élan, seeing the greatest paintings, going to the finest clubs, mingling with the most interesting artists and celebrities. But all that accumulated savoir faire couldn’t stave off the ennui he experienced every time he crossed over from LAX to OIA.

“In Los Angeles, so much was happening,” he says. “The women were all beautiful. The men were all well-dressed. Then I’d get to Orlando and there would be all these frumpy people in flip-flops.”

But then he began to make connections with people like Davon Barbour and Amber Mundiger at the city’s Downtown Development Board, both of whom were interested in bringing a broader, more sophisticated array of arts and artists to Orlando.

“I began thinking if there are people like this in Orlando, maybe I could do something to help,” he says. “And to me it was unacceptable for a city like this to have no one promoting art photography. So I said, ‘Let’s give it a try.’ ” 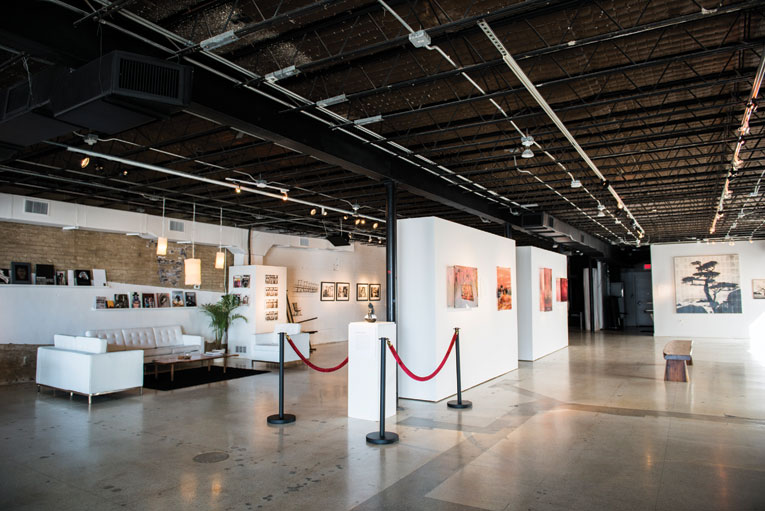 Kahn decided to stage a photography festival. Then he worked with a marketing firm to come up with a name for it. They arrived at a simple one: “Snap!” He began working his L.A. connections, searched for venues in Orlando, and finally, in 2010, flew in photographers from all over the country for a four-day festival of exhibits, lectures and workshops in several downtown locations.

The event was a hit, even though few people in Orlando had ever heard of the headliner: his old friend, Douglas Kirkland. (The feeling was mutual: When Kahn first invited him to Florida, Kirkland responded: “Sure. I love Miami.”)

Kahn went on to stage three more increasingly elaborate annual festivals in vacant downtown warehouses. Then, partly because a resurgent Orlando was running out of empty warehouses and partly because he was warming to the city’s developing cultural scene, he decided to look for a permanent location.

He found it in a weathered Colonial Drive building that had been home, from 1940 to 1948, to a small movie theater called the Cameo. (Its sister theater in Winter Park, the Colony, opened that same year and enjoyed a somewhat longer lifespan, closing in 1975.)

The gallery fit nicely into the youngish, eclectic, cross-cultural urban vibe of a rapidly-shifting neighborhood, with its Asian restaurants, funky shops and a flurry of new residents drawn by the blossoming Mills Park development.

The building has been rejuvenated without sacrificing its character. Outside, a replica of the Cameo’s marquee hovers overhead. Inside, the walls have been stripped to raw brick, save for faint, sloping bands of plaster on either side of the room, lingering evidence of the gentle slant the old movie theater’s floor must have had.

The Kahns installed portable walls so that they could shift the layout of the gallery from one exhibit to another, added couches, tables and bookshelves stocked with volumes devoted to art photography, and fenced in an adjacent courtyard for socializing.

Three months ago, more than a thousand people turned up when the couple staged a party to celebrate their first year in the neighborhood. Among them was the gallery’s landlord, Jorge Boone, who had bought the run-down building out of foreclosure. He’d brought some friends along, one of whom turned to him and said, “I didn’t know there were this many beautiful people in Orlando.”

Kahn, who calls the gallery a 3-D version of his old L.A. magazine, makes choices as a curator that reflect just the sort of broad-ranging, cultivated perspective you might expect from a bohemian nomad who owns three passports (one each from Switzerland, France and the United States).

“I think Patrick has an extra compartment in his brain,” says Holly. “He is constantly juggling ideas. He makes a list of things to do every day of his life, in this tiny, perfect hand. And he has to be surrounded by art, by culture. It’s how we breathe around here.”

In spite of the steady thrum of traffic whizzing by on Colonial, the gallery is a cozy, serene enclave. Yet it can sometimes feel as if somebody left the door open and let the whole world walk in.

One recent exhibit focused on photographers whose works reflect their own life journey. Its theme was “identity.”

It included the work of Zun Lee, a medical doctor who credits his upbringing to several black servicemen who mentored him as he grew up near a U.S. Army base in Germany as a bullied, alienated, mixed-race child.

Lee, who took up photography as a hobby, spent years on a project to capture intimate photos of dedicated black fathers caring for their children. One photo in the exhibit captures a shirtless man, his back rippling with muscles and covered in tattoos from waist to anvil shoulders, confidently carrying a beaming child on his shoulder. The second was of that same man, crying in a run-down apartment, stifling his sobs so they can’t be heard by his children, who can be seen at play on the other side of the wall.

Just across the gallery were the photographs of Mei Xian Qiu, a Chinese woman who was born in Indonesia to a family who immigrated to the United States to escape the mass persecution triggered by Mao Zedong’s Cultural Revolution. Qiu’s glossy, carefully staged, deceptively glamorous images of uniformed Asian men and exotic women are haunting parodies of the propaganda images that fueled the persecution.

“My photos are about what is real and what is fiction—and whether in the end, it really matters,” says Qui, who, like Zun Lee, came to Orlando to lecture and mingle with guests during the exhibit.

The Kahns have kept their enterprise afloat by landing small grants, staging fundraisers, attracting sponsors and renting out the gallery for events. People are also beginning to buy photographs from the exhibits, and the gallery collects a commission. Patrick and Holly work as a team: He is producer and curator, and she is in charge of social media.

Whether it’s just a happy coincidence or keyed to the momentum generated by the new performing arts center, the emergence of Snap! Space is just one part of a noticeable spike in the level of sophisticated visual arts in Central Florida.

The current world-class exhibit of Maya Lin’s evocative environmental sculptures at the Orlando Museum of Art is evidence that new OMA director Glen Gentele is steering the museum in a more progressive direction. The same can be said of the fresh, challenging exhibits another new museum director, Ena Heller, continues to orchestrate at the Cornell Fine Arts Museum at Rollins College. Meanwhile, the 100-piece contemporary art collection on display at the new Alfond Inn in Winter Park has done its share to raise the bar.

And Patrick Kahn has a few new ideas of his own.

Last year, the Kahns were too busy settling into their new digs to stage their annual photography festival. This year they’re bringing it back with a vengeance with a sprawling, expanded festival they call “You Are Here.”

Instead of a four or five-day run, as in the past, the 2015 Snap! festival will last for a month, May 1–30. And this year, instead of being staged at just a few venues, the festival will include exhibits at 20 Orlando-area locations, as well as sites in Tampa and Daytona Beach.

Call it a moveable feast.

Get a taste of what to expect at the 2015 Snap! festival here.