The Hoop-Dee-Doo Musical Revue is Back 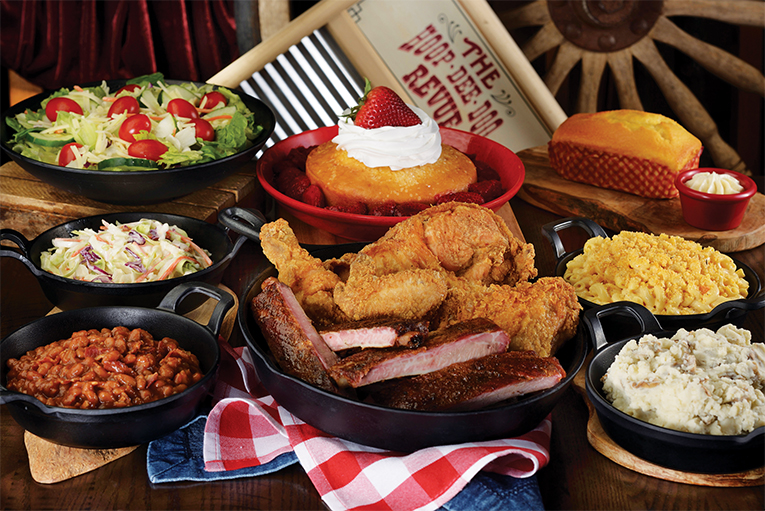 Be sure to save room for strawberry shortcake. (WALT DISNEY WORLD)

Howdy do, folks! It’s time to put the feedbag on. The Hoop-Dee-Doo Musical Revue is finally returning to Disney’s Fort Wilderness Resort on June 23, and not a moment too soon.

Walt Disney was an ardent fan of the western, and who could blame him? The story goes it was the success of Disney’s 1950s television show Davy Crockett and the selling-like-hotcakes coonskin caps that enabled Disney to finance his park operations for several years. No wonder Walt was fond of a good western theme.

While the beloved show will remain the same, the Disney team used this downtime to give the “old gal” a slight facelift. “When we reopen the show, it will feel fresher than ever,” says Tom Vazzana, show director at Walt Disney World Resort. “We took a lot of time to refresh all aspects of the venue. Everything from the audio and lighting got a nice refresh.”

The result will be the return of an old friend, but revitalized and rejuvenated. “When we open, our guests will see their legacy gem-favorite show in all its fun form,” promises Vazzana. “The show is the same rollicking fun that it’s always been.”
“Since its opening day almost 50 years ago,” according to a recent Disney statement. “This fan-favorite show has continued to surprise and delight our guests, and as Disney grows, we look for new ways to elevate and enhance our classic experiences. Hoop-Dee-Doo will return with a few updates to its script and scenery while staying true to the treasured experience the whole family can enjoy–with the hilarious, high-spirited entertainment that it’s been known for all these years.”

Hoop-Dee-Doo has always held a special place in the hearts of Disney fans, locals, and Disney cast members. “Hoop-Dee-Doo is one of the ‘legacy’ shows that has been here from the early days of Fort Wilderness,” explains Vazzana, who, besides being the show director, was a former performer in the show.

“The show holds a personal, strong connection for me. I love talking about the show because 27 years ago, I was in the show myself as Six Bits. Then I got to be the director and now the creative director for what is a beloved show.”
Vazzana believes that part of the appeal is that it’s a triple threat show. “You have to sing, dance and act,” he explains. “We’re asking guests to come and take a break, sit down as a family or with friends, and enjoy a meal and a show in one space. There’s no rushing agenda, but a destination show.” 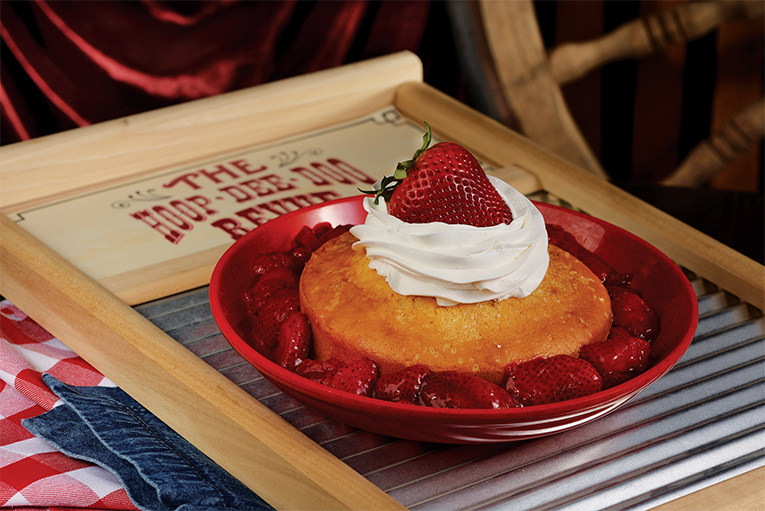 Time to put on the feedbag, with BBQ ribs, fried chicken and so much more. (WALT DISNEY WORLD)

When asked his favorite bit of Hoop-trivia, Vazzana admits, “When I was in the show, we sang about apple pie. One day, we changed our menu to shortcake, and we had to come in and learn a new song about ‘Strawberry-clap-clap-Shortcake.’”
Is Vazzana a shortcake fan? “It’s an amazing dessert, and I’m not underselling it. I always say, leave one last rib alone because you might want to dive into the Strawberry Shortcake.”

Make your reservations today because now that the word is out, tickets will fly like a duck on a June bug, a fly on a hotcake, or perhaps on a strawberry shortcake. Whatever the case may be, Hoop-Dee-Doo is back, and it will be like visiting an old, dear friend who’s had a teensy facelift.
As Walt Disney himself said about the show, “Hoop-Dee-Doo is a hilarious, high-spirited hootenanny the whole family will enjoy!”
I couldn’t have said it better myself.