The Fringe Festival will feature parodies aplenty, with targets ranging from “Star Wars” to “Stranger Things.” Plus much more at the two-week theatrical extravaganza.

Once, while going through his things, Charles Ross discovered a lost artifact from an era that has come to be known as “the ’80s.” Called a videotape cassette, it apparently was used by the people of that time to record television shows such as Magnum, P.I.; The A-Team; and The Dukes of Hazzard, perhaps in order to watch them at a more convenient time, perhaps to search them for underlying themes and special advertising offers they might have overlooked on a first viewing. 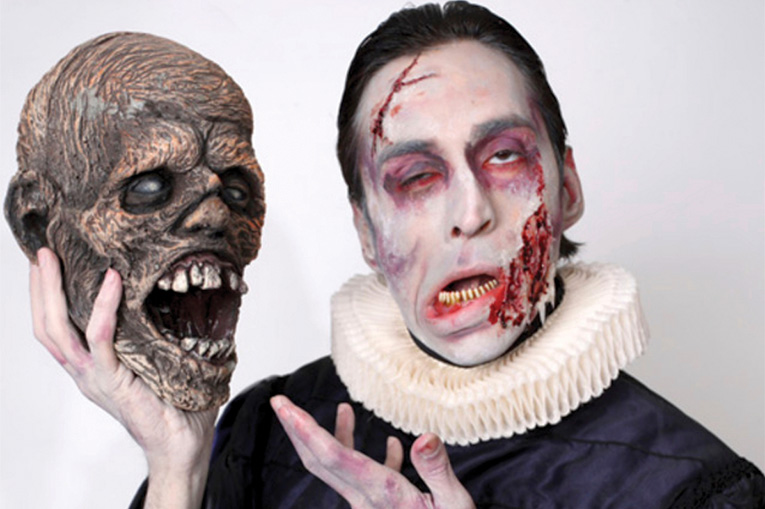 Canadian Mark Meer will pay tribute to eight seasons of The Walking Dead during the Fringe. (COURTESY OF FRINGE FESTIVAL AND PERFORMERS)

On this particular videotape, Ross had recorded his favorite shows for safekeeping. But his sisters had taped over them multiple times. “There were all these five-minute snippets of The Young and the Restless, plus bits and pieces of other shows,” he says. “It was this surreal, chaotic mess, like some wacked-out, crazy person was channel surfing.”

Most people would have thrown it away. Thanks to his training as a Fringe artist, he knew exactly what to do with something so random, weird and utterly useless: He used it as the basis for a one-man show that was part autobiography, part TV Land nostalgia.

Ross is one 2,000 performers in the 2018 version of the Orlando International Fringe Theatre Festival —131 unjuried, uncensored, unrestrained, unabashed and heretofore unimaginable theatrical productions to be presented May 15-28 at various venues in Loch Haven Park and the surrounding Mills 50 District.

He is a master of a Fringe-circuit staple: the pop-culture parody. This year, he’s back with, among other offerings, his longest-running one-man show: Star Wars Trilogy, encompassing Star Wars, The Empire Strikes Back, and Return of the Jedi. It’s a show he’s performed hundreds of times worldwide since 2001—all minus co-stars and CGI.

There are always plenty of parodies at Fringe, but this season sports a bumper crop, partly thanks to Ross, who’ll be performing four other parodies—including a tribute to The Lord of the Rings movies; another one to the Stranger Things Netflix series; and a Star Wars minutiae spinoff show called TK421 Is Dead: A Storm Trooper’s Story, in which he and fellow Fringe performer Rod Peter Jr. will play two Death Star underlings griping about working conditions and office politics. In a departure from his sci-fi and fantasy roots, Ross will also perform a boiled-down, one-man version of  a recent six-part BBC presentation of Jane Austen’s Pride and Prejudice.

“I just hope I can manage the female parts without looking too ridiculous,” he says.

This year’s parody lineup also includes the Fringe-circuit premiere of One Man Walking Dead, whose performer, Mark Meer, feels a bit like a zombie himself these days. Not because he’s a method actor: Actually, like many parody artists, his roots are in improv. It’s the challenge of squeezing tributes to eight seasons’ worth of The Walking Dead’s key performers—be they still alive, dead, or somewhere in between—into a one-hour production. Dead heads can certainly count on seeing him bring the still-running show’s presumably still-surviving protagonist, Rick Grimes, to life, plus the nameless, torso-less “bicycle girl” who bears the distinction of being the first of many zombies Grimes has been called on to dispatch.

Meer, who is also a video-game star best known as the voice of Commander Shepard in the Mass Effect Trilogy, will split his time between the Fringe and appearances at MegaCon Orlando. Like Ross, he is part of the Fringe circuit’s sizable Canadian contingent, and works with veteran Fringe writer/director/actor TJ Dawe in developing his parodies. 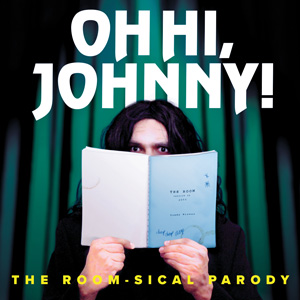 COURTESY OF FRINGE FESTIVAL AND PERFORMERS

Oh Hi, Johnny conjures up The Room, arguably the worst movie ever made

“Canadians are completely immersed in U.S. culture without actually being part of it,” says Meer. “That gives us a very good viewpoint.”

There are also two noteworthy locally produced parody premieres. One, created by the Winter Garden team of Johnnie Maier and Eddie Gomez, who won the critic’s choice Best Musical award last year for Thankskilling, is based on Stephen King’s spooky-clown thriller, It. Another, masterminded by Winter Garden resident Dana Searing, is “Oh, Hi, Johnny”—The Roomsical Parody Musical. It’s a tongue-in-cheek tribute to The Room, the so-called “worst movie ever made,”  a torturous, independently produced 2003 love-triangle movie that—speaking of one-man shows—earned its novice Eastern European immigrant writer/producer/director/star a cultish following. Well, that, along with the title  “the Orson Welles of crap.” (To get a sense of just how bad the movie is, you can check out numerous clips on YouTube.)

Although nostalgia, outright nerdiness, and the sheer joy of ridiculing something is usually what drives the popularity of parody, it’s a flexible form, as evidenced by another local effort.  Called El Wiz, it’s a Hispanic take on The Wizard Of Oz, co-produced by Paul Castaneda, whose roots are in local theater, and his friend Juan Cantu, creative director for Mertz Productions, which creates shows for cruise lines, hotels, and other corporate customers.

“We wanted to do something with the flavor of Latino and Latinx,” says Castaneda. “We’re taking America’s fairy tale and ‘Latin-izing’ it, for want of a better word. It’s going to be fun, with big song-and-dance numbers. And our Dorothy doesn’t come from Kansas. She’s going to be from an island in the Caribbean.”

If parody isn’t to your liking—or even if it is—here, in no particular order, are other Fringe shows in a variety of permutations, each notable either for the artists involved, the originality of the productions, or both.

An Excruciatingly Ordinary Toy Theater Show: Anything but ordinary, Zach Dorn’s  miniature paper puppet show is essentially a live-action comic book. Dorn uses a camera to track the drama of a little boy besieged by a ghost and an evil landlord against the backdrop of a tiny, cleverly designed cityscape. It’s on tour thanks to a Jim Henson Foundation grant.

Red Bastard-lie with me: Eric Davis is a bouffon, a jester who specializes in mockery. Dressed in a lumpy red unitard, he needles, cajoles, mocks, tickles—anything to create audience participation, which in his world means getting people to do and say foolish things. Well, let’s say Fringy things. Not a good time and place to take yourself seriously. “Sometimes you’re going to feel ridiculous,” Davis explains. “Sometimes somebody else is going to feel ridiculous. But we’re all just playing and talking.”

Fire in the Meth Lab: Aussie Jon Bennett returns with his rollicking, poignant tribute to a ne’er-do-well brother. It’s been here before. It’s worth seeing again. Bennett is a consummate Fringe-circuit stylist, meaning that he appears to be on the verge of going off the rails at any moment.

Van Gogh Find Yourself: Using letters written between Van Gogh and his brother, Theo, and the touching memoir of one of the artist’s models, Adeline Ravoux, actor, writer and artist Walter DeForest slips into the charming persona of Vincent Van Gogh. Not only that, he sketches audience members during the course of the show.

Eddie Poe: This is on the list partly because we are deathly afraid of offending The Coldharts, a really creepy New York company that specializes in macabre musicals. This show is a sequel, or maybe a prequel, to Edgar Allan, their portrayal of Edgar Allan Poe as a dangerously troubled young man whose behavior mirrors the paranoia of Poe’s fictional characters, particularly the vengeful narrator of The Cask of Amontillado. Edgar Allan won the Orlando Fringe Best Show Award in 2016. Want to bet against Eddie Poe? Don’t say we didn’t warn you.

A Canadian Bartender at Butlin’s: TJ Dawe, last seen in these parts with Roller Coaster, his affectionate take on Orlando in general and its tourist attractions in particular, has come up with a tourist-trap companion piece, of sorts: an imaginary barkeep’s rumination on Butlin’s, a chain of  “holiday camps” in Great Britain.

The Companion and Safe Word: Two racy one-act operas, one about an android lover and another set in a private dungeon, prove that Opera Orlando is not playing it safe these days. It’s the company’s Fringe debut.

Six Guitars: Any time Chase Padgett presents this Fringe masterwork, in which he portrays six guitarists with six different styles—blues, jazz, rock, classical, folk, and country—it’s worth checking out.  And it’s good to know that Padgett, who had a mild heart attack earlier this year, is feeling better.

An All-New God Is a Scottish Drag Queen: Dressed in a floral power suit and poking fun at everything from the pope to politics, Mike Delamont is back from the dark side. More or less. At last year’s Fringe he dressed in red and did a show as the devil. His costume ripped right before he walked on stage. Maybe he took it as a warning. Delamont will also do the honors as emcee of Floriduh, a satirical talk show devoted to dramatizing the abundant store of weird news clips about Floridians doing really stupid things.

Stay on the Fringe

For schedules and the scoop on performance tickets, Visual Fringe, Kids Fringe, Acts on the outdoor stage and more, go to orlandofringe.org