The Florida Project: A Bittersweet Adventure

The filmmakers behind “The Florida Project’’ tell how they settled on Orlando for a story about scrappy “welfare motel” kids.

Irlo Bronson Highway, U.S. 192 heading into Kissimmee, is the Greater Orlando that most tourists rarely see and locals often avoid.

We might venture to one of the established non-Disney attractions, but along the way we joke about the tacky architecture, the the congested roads and the naked commerce of the Disney-driven strip just west of the city. But few of us take a hard look at the garishly painted fifth-hand motels, often the haunts of Central Florida’s poor, some of whom might find work catering to the tourist trade peddling T-shirts or “discounted” theme park tickets. Many spend their nights, weeks and months in living quarters that could be called Cinderella’s Slums.

That’s the setting of The Florida Project, a much-praised and honored indie film that tells the story of at-risk but resilient and enterprising “welfare motel” kids, growing up in the seedy borderlands of Orlando theme parks they never enter. The film opened in early fall—enjoying an extended run at Maitland’s Enzian theater—and has generated awards buzz that should magnify its impact as nominations for the Oscars, Critics’ Choice, Golden Globes and Independent Spirit Awards are announced. 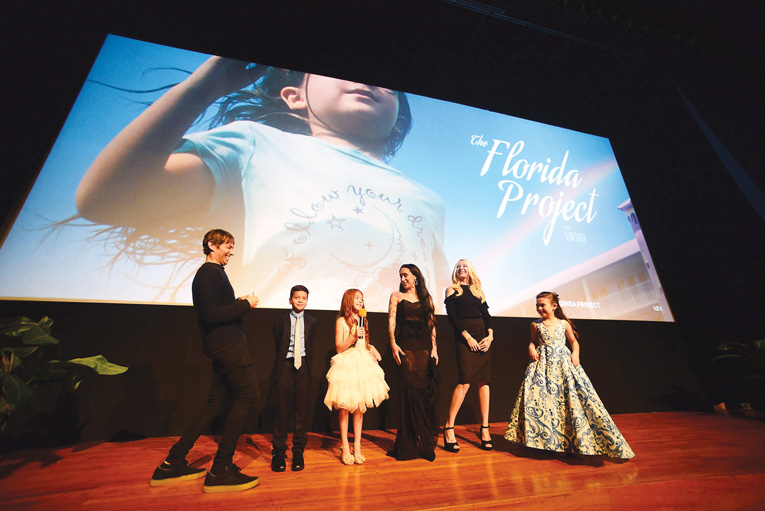 Orlando premiere night at the Enzian (ENZIAN: GERARDO MORA/GETTY IMAGES FOR A24)

Director Sean Baker (Tangerine) says he’s wanted to do “a modern Little Rascals,” a movie about poor kids finding rude, mischievous fun where they can in the New American Depression, just as the original “Rascals” were children of the Great Depression. And his frequent collaborator—screenwriter Chris Bergoch—had just the place in mind, a place not too far from where his mother relocated from New Jersey a dozen years ago.

“Visiting her and then hitting the theme parks, I’d drive up and down 192,” Bergoch says. “There was one day where I hit a red light, and I noticed these kids over in a vacant lot next to a motel playing Wiffle Ball. They didn’t look like tourists to me. This was their day, their entertainment.

“What’s going on over there? Why would they play there?

“I had no idea they lived there. Then, you notice it once, you notice it every time you drive that highway. There was one time we went by this bus stop covered with kids. They looked like they were having so much fun, and they weren’t even waiting for the bus. They were treating the shelter like a playground fort.”

Bergoch did some online research and found news stories about the families trapped in “welfare motels.”

“While homelessness is everywhere, something about it being kids in the shadow of Cinderella Castle, the ‘most magical place on Earth,’ being so close and being unable to go there, yet still having so much fun because that’s what kids do—playing hide and seek, exploring, playing ‘vampire’ tag—struck me.”

“We tell this story here because the contrast is so striking,” the director adds. “Millions of visitors, the tourist capital of the world, and they never see this. It’s kept just out of sight.”

The Florida Project follows Moonee, the ringleader of a gang of mouthy 6-year-olds forced to fend for themselves and find their own fun at the Futureland Inn (actually the closed Paradise Motel) and adjacent bright purple Magic Castle Motel. She’s played by instant indie film sensation Brooklynn Prince of Winter Springs, “our movie’s Spanky McFarland,’’ Baker says. Her closest bud is Scooty, played by Kissimmee native Christopher Rivera. Jancey, played by Davenport native Valeria Cotto, is the newcomer Moonee initiates into their group and her world. Their parents are either underemployed or unemployable, so they live off low-paying jobs, government assistance, handouts and side hustles. And Moonee has learned a few hustles of her own—how to beg for free ice cream from the nearby Twistee Treat, where to see Disney’s fireworks for free.

Baker and Bergoch settled on their concept back in 2012. Financing came more easily after their cellphone-shot transvestite street comedy, Tangerine, became an indie phenomenon in 2015. They landed a “name” to get the production off the ground. Willem Dafoe plays the motel manager, inspired by several local men including an America’s Best manager named John Manning. Dafoe’s Bobby is torn between the job—which may force him to evict these families that have nowhere else to go—and his protective affection for the kids. Baker and Bergoch “lucked out” in finally finding their “Little Rascals” locally.

After landing Dafoe and the kids, it was a race against time—securing locations before the businesses closed, changed hands or fell into such disrepair it wouldn’t serve the filmmakers’ purposes.

“I feel like I’ve been location-scouting for this movie since I was four,” Bergoch jokes, recalling the first time his family visited Disney World. While he was able to get such sights as the “Giant Mermaid” and “Big Orange” gift shops into the movie, often as not he was thwarted by the ever-changing real estate of 192.

“I stopped at the closed Xanadu: Home of the Future, and there were homeless living in it. What irony that was. ‘The Home of the Future,’ falling apart and filled with squatters. Then it was torn down. And I had this beautiful sequence in mind for Splendid China. We snuck in long after it had closed and was rotting away. It would have been perfect. Moonee takes Jancey to her special place, playing in the ruins” of this scale model of the famous sights of China. “The month before we started shooting (June 2016) Jimmy Buffett stepped in” and bulldozed it to make way for his Orlando Margaritaville development.

The locations give the film a gritty Orlando that is sure to shock, even if you’ve seen the comparable Oscar-winning Orlando drama Monster or the Orlando housing-bust tragedy 99 Homes. Its realistic, amusing and sometimes alarming depictions of children and childhood are earning The Florida Project substantial buzz, with The Daily Beast naming it “one of the greatest films of the year” and The Hollywood Reporter calling the movie “a fabulous mosaic” of homelessness in America’s Vacationland.

The cast and crew hope this buzz draws an audience that might not otherwise check out a film about Orlando’s dark side and homelessness. Because even the actors were shocked at the movie’s portrayal of something they never knew existed. Brooklyn-based dancer and actress Mela Murder plays one of the minimum-wage moms in the movie, and thought she knew all about Theme Park Orlando from her visits here as a child.

“I read the script and thought, ‘Is this an actual thing? Or did they just make this up?’ “ she says. “I saw the conditions, the children, the families…That hurts me. That hurts my heart.

“It puts into perspective the issues that this country has with the haves and have-nots. These families are in the shadows, forgotten. Uncared for. We need to know about them. We need to care for them. That’s the message I hope this film gets across.” 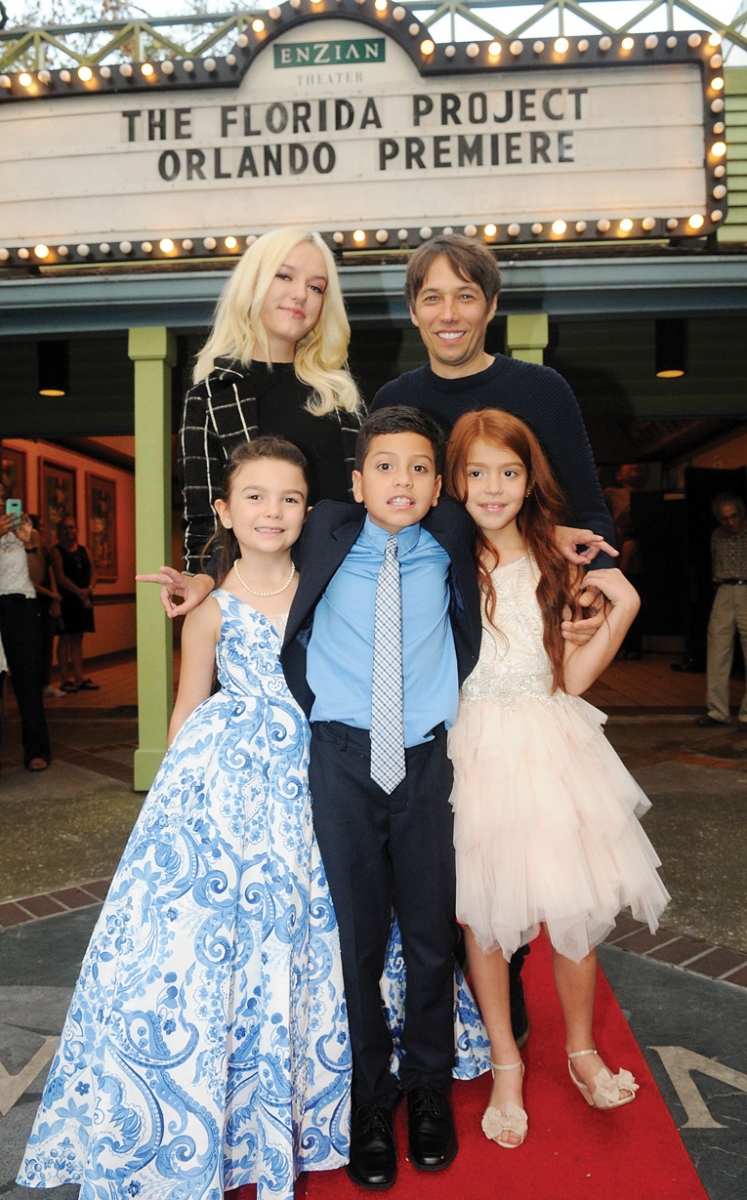 The 7-year-old stars of “The Florida Project’’ dish on friendship, scene-shooting drudgery and jelly sandwiches.

There’s an art, a trick to interviewing very young children and child actors. And after 30 years of doing it, as soon as I figure it out, I’ll pass that wisdom on to you. Promise.

Because often the only strategy is to turn them loose as they free-associate their way to Great Truths about their “work” (which can seem like play) or their latest project.

Brooklynn Prince is a Winter Springs veteran of TV commercials and other local acting work. Valeria Cotto is from Davenport, was “discovered” by director Sean Baker in a local Target, and is Brooklyn’s new pal off-screen and on-screen—in The Florida Project. Brooklynn was cast “as our Spanky McFarland,” the leader of the pack of kids Baker envisioned for his “Little Rascals” film set in the welfare motels just outside of Disney World. She’s talkative and outgoing, and picked out the tattooed discovery Bria Vinaite to play her mom “by just jumping into my lap when I came to audition,” Vinaite laughs. Valeria, playing Jancey, the new kid to whom this new way of life is explained by Brookynn’s character, Moonee, is new to this business but smart and diplomatic about it.

The girls enjoyed one of their first “press days” of interviews recently at Winter Park’s Alfond Inn. And when they weren’t playing rock-paper-scissors to decide who would answer a question first, or debating their favorite thing about Disney World—”Meeting PRINCESSES!” “Pirates of the Caribbean for me!”—or singing “Yo ho ho, the pirate’s life for me” in 7-year-old harmony, they talked about improvising for the movie, for instance.

Valeria: “When we were on the picnic table (in one play scene), Sean just said ‘Do whatever you want.’ So we started dancing.”

Brooklynn: “That was OUR idea. My idea was that the floor we were dancing on was LAVA!”

On why kids their age are so good at making friends in an instant:

Brooklynn: “We DIDN’T like each other!” She giggles. “Just KIDDING!”

Brooklynn: “I’m not shy. I’ve been a happy girl all my life. My first word was ‘HI!’ I knew we’d be like sisters.”

Valeria: “Like my character, I’m shy. We were all shy. Well, not Brooklynn. But I am, just like Jancey. And my first word was ‘LOVE.’”

On life in a welfare motel:

Valeria: “Living in a motel would be really rough. You can’t go anywhere. You’re stuck there, which is the worst thing ever.”

Brooklynn: “Yeah, but WE were in charge. Girls RULE!”

On the “boring” nature of movie work—sitting around, waiting to film, trying to entertain yourself:

Brooklynn: “We’d have sleepovers! What’s better than a sleepover?
NOTHING.”

Valeria: “We had card games like Uno, board games. We’d just…’’

On their least favorite thing about making movies:

Brooklynn: “I hate re-takes. One time in the movie we had to eat a jelly sandwich for a scene. Over and over and OVER again. Take after take! I couldn’t eat lunch. I couldn’t even eat dinner. I was full. I was DEAD!”

Valeria: “I could. I LOVE to eat. I love jelly sandwiches!”

Brooklynn: “I was DEAD, girl. I POOPED jelly.”

Brooklyn: “I want to keep acting. I love this. And someday, I want to DIRECT. Because directors get to YELL!”

Valeria: “I want to act, but only in movies with Sean Baker. And Elle Fanning.” (They both have a thing for the younger Fanning sister child star.)

Brooklynn: “Girl, you’ll not go anywhere fun. You’ll NEVER work. I mean, just with Sean? And only when Sean makes a movie with Elle Fanning? What about auditions?”