The Best of Us

One terrible day in June changed Orlando forever. But the worst acts imaginable carried out by a gunman inside the Pulse nightclub ultimately brought out the best in our community. We reflect on what we lost, and how our reaction to it will shape the image of Orlando the world will come to know.

Blue Star has a name for what lies ahead.

She calls it “our year of firsts.”

She is a classically trained dancer with a den mother’s heart, an irrepressible woman who has gone by her stage name since moving to Orlando 14 years ago and eventually becoming a cabaret owner and gay-community matriarch. Eleven of the victims of the Pulse nightclub attack were her friends. Six survived, five did not.

The “firsts” she has in mind will measure both the course of her own grief and the shadows the attack will cast over the LGBTQ community’s calendar of events, such as Gay Pride Month in October.

“I know when it will hit me,” she says. “It will hit me when it comes time for an event, and I pick up the phone to call someone that I could always count on, and they won’t be there anymore.” 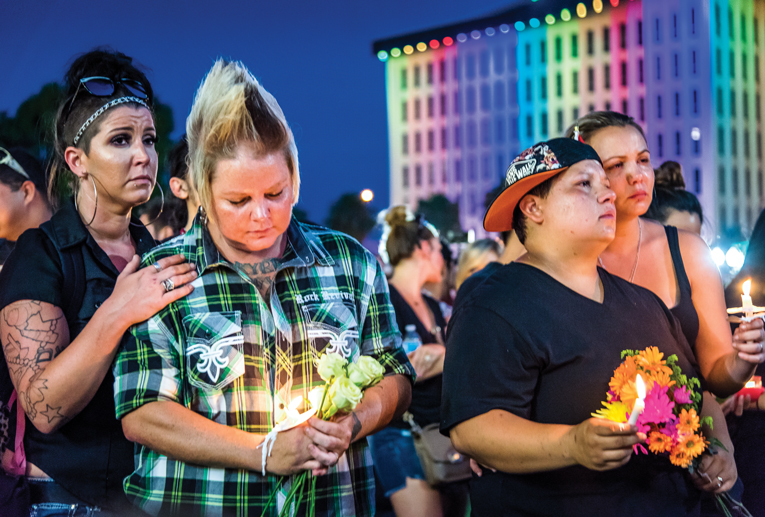 A mass killing of a targeted community with an assault rifle is difficult enough to absorb at a sympathetic distance. We did not have that luxury this time around, and in the fuzzy first days, when we shook ourselves off like dazed drivers emerging from a wreck, you could sense the seismic shift of what was happening to us in the signs and wonders that came our way from around the world. How the streets of SoHo were crowded with mourners. How the Eiffel Tower was illuminated in rainbow colors. How a Tony Award winner interrupted the ceremony to read us a sonnet of sympathy. 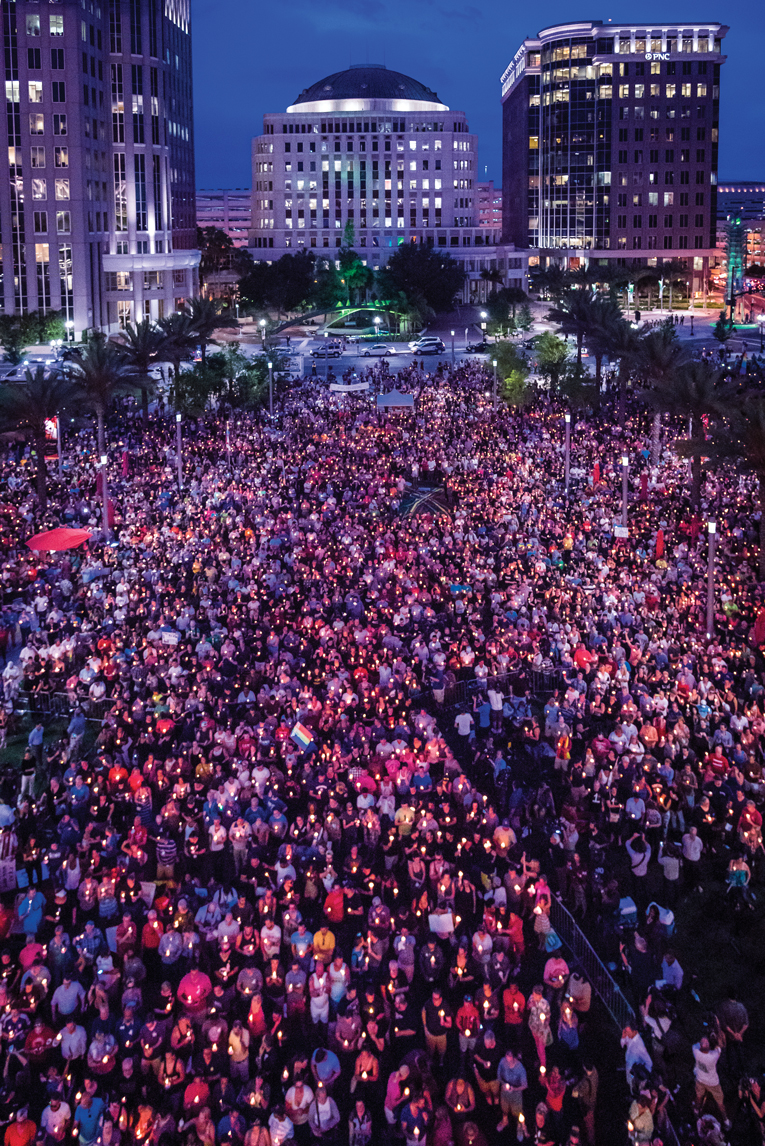 Strangers, some of them middle-aged suburbanites encountering young people who had lost friends in the nightclub attack, locked eyes and embraced in tears amid the flowers and candles of makeshift poster-board shrines. A rainbow arched over a grieving crowd of 50,000 at Lake Eola. A flight of angels appeared outside Cathedral Church of St. Luke, and a grassroots crowd gathered to stand shoulder to shoulder with them, shrugging off a gay-hate group so deftly that the Orlando Police Department responded the next day with a grateful message: "Thank you to those who met the protest with grace & love.''It felt a bit like having a cop pull you over on I-4 to congratulate you for being a safe driver and model citizen.

But none of these things were miracles.

The saints were ordinary citizens, the angels of flesh and blood, their wings fashioned from PVC pipes and bedsheets and assembled by workers at the Orlando Shakespeare Theater. The actors and community volunteers who wore them lined up on Orange Avenue to shield mourners attending the funeral of a Pulse victim at St. Luke’s from the signs and chants of the hate group. 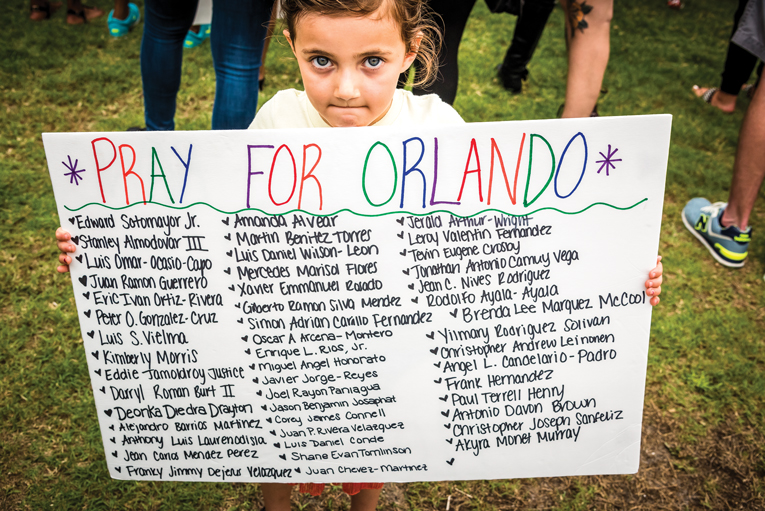 Hailey Smith, 5, holds a sign bearing the names of most of those who died. (ROBERTO GONZALEZ)

Some people just started doing things on their own.

On her own, Orlando actress Michelle Knight made the rounds of Manhattan theaters, asking for donations of memorabilia and coming home with armloads of signed playbills and posters from Hamilton, Cagney, An American in Paris and a dozen other shows, all to be auctioned off in a benefit for victims.

On his own, hard-boiled radio talk show host Jim Philips, a firearms sports enthusiast from the age of 12, decided to get rid of his AR-15 semiautomatic rifle, a weapon similar to the one used by the Pulse shooter. “I no longer want to be associated with a type of firearm that has been used on far too many occasions to mow down and chop up human beings,’’ he said in an essay that appeared in the Orlando Sentinel. Philips wrote that he would find a way to ensure that it never gets into the hands of a madman. 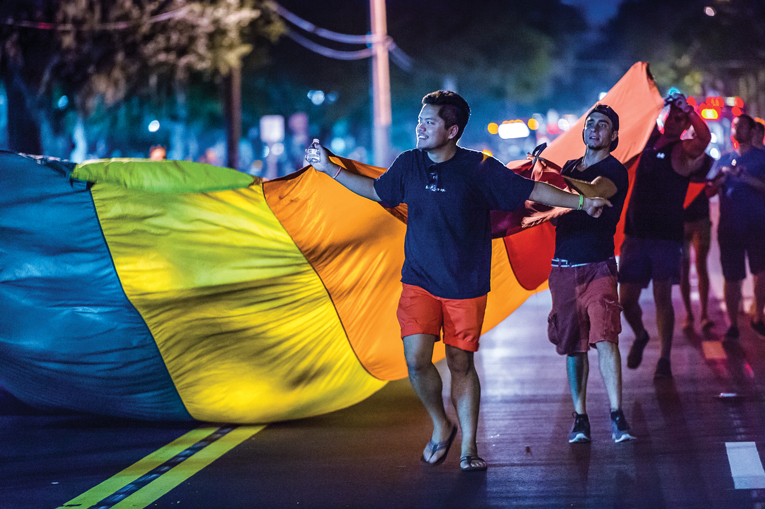 Marching with a rainbow flag at the Lake Eola vigil. (ROBERTO GONZALEZ)

The world of sports has never been known as a source of sympathy or compassion for gays. The Orlando City Soccer Club sent a resonant message about that, staging an emotional tribute to the victims, cordoning off a section of 49 empty seats decorated with rainbow-colored balloons during a match, which was halted for a moment of silence at the 49-minute mark.

Churches not known for being sympathetic to the gay community put sermonizing on hold to focus on healing. During a memorial service, Northland Church pastor Joel Hunter turned his microphone over to Victoria Kirby York, national campaign director of the National LGBTQ Task Force, rather than address the assemblage himself.

“Here’s the potential silver lining in this,” said Orlando Mayor Buddy Dyer. “A lot of people who may not have held the same point of view, in terms of diversity and equity and equality, have had a change of heart.''

Nicole Hockley put it another way: “Orlando has to grieve. Then they need to get up and do something.” Hockley, who lost her 6-year-old son in the Sandy Hook massacre in which 20 children and 6 adults were shot to death, is one of the founders of Sandy Hook Promise, a grassroots organization dedicated to preventing gun violence.

The tragedy of Sandy Hook took place in a small Connecticut town. Orlando is a high-profile international crossroad, the most visited tourist destination in the country. Its political, social and economic power base is a formidable thing, much of it relying on quietly influential gays who donate generously to the arts, LGBTQ outreach organizations, and political and social causes. 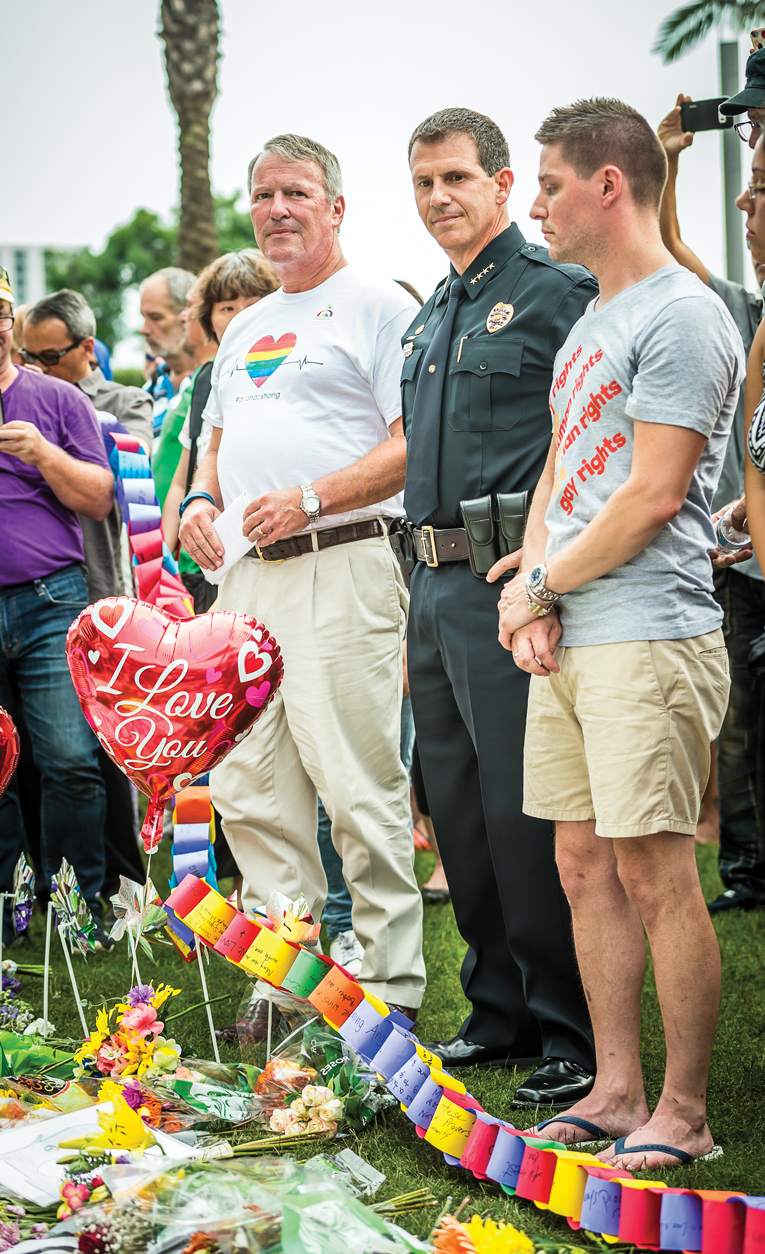 Our arts are becoming more sophisticated, our population more diverse. Our downtown core is still in the early stages of blossoming into a world-class technological, educational, recreational and residential hub. This tragedy—or rather our reaction to it—is now a part of that renaissance, and will help reshape the image of Orlando that the world will come to know.

Often, the sites of mass murders are demolished. Because of drive-by gawkers, the Amish schoolhouse in Lancaster, Pa., where a gunman murdered five girls, was torn down. So was the Sandy Hook grade school.

But the owner of Pulse, Barbara Poma, has insisted that she will rebuild Pulse in some way. There’s a symbolic issue at stake here. Pulse wasn’t just a nightclub. It was a second home. For many, rejected or misunderstood by their own families, more like a first home.

The city has announced plans to create a permanent memorial to the victims. But beyond that, there will certainly be the opportunity, and the obligation, for individuals and institutions to address the social issues that the Pulse attack evoked—gay rights, mental health, gun control.

Already, more than 50 Orlando performing arts groups have collaborated to stage a joint performance as a benefit, promising more in the future, some of which will involve original works and discussion groups probing the issues brought up by the attacks. The Shakespeare Theater has been exploring avenues to connect with the Hispanic community in outreach efforts connected to next month’s production of West Side Story. Latinos, most of them Puerto Ricans, represented the vast majority of the Pulse victims.

Though its presence as the opening production of the theater’s season is coincidental, West Side Story, based on Romeo and Juliet, connects with a modern tragedy in more ways that one. Based on urban warfare involving  a Puerto Rican gang, its theme revolves around young innocents who lose their lives when they are caught up in a battle between two warring clans.

“That’s the job of the theater, to hold up a mirror to nature, to let us clearly see our own actions,” says  the Shakespeare Theater’s artistic director, Jim Helsinger, who organized the real-life angel brigade that protected mourners from the hate group.

The arts will also play a part in “Project DTO,” whose ambitious purpose is to lay out a path for a creative, cohesive, pedestrian-friendly downtown Orlando. The effort, kicked off by a task force of 75 community leaders, is an example of creative placemaking, an urban renewal philosophy based on using the performing and visual arts as partners with private enterprise to enhance and enrich a community, often in ingenious ways.

The goal of the project, still in the planning stages, is to reshape downtown over the next 10 years. Now it can be even more than that.

Now it’s a chance to get up and do something.

See our photo essay "A City United" by Roberto Gonzalez 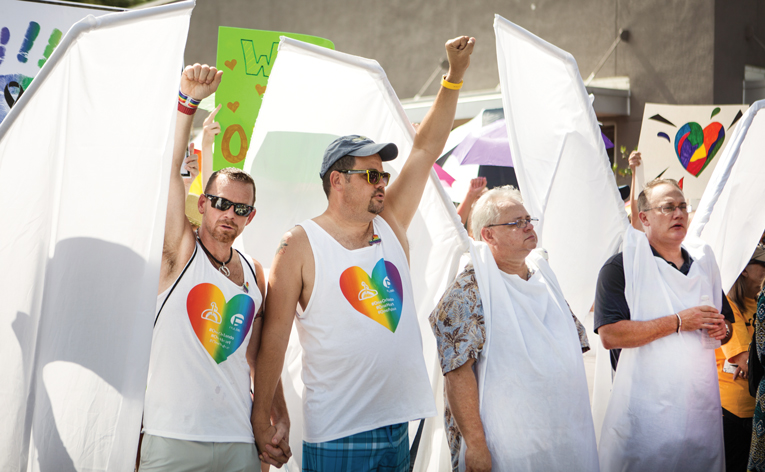 An angelic wall of protection at a victim's funeral, anchored on the right by the Shakespeare Theater's Jim Helsinger. (CHRIS RANK)