The A-maize-ing History of Grits

Some food economists have suggested there’s a “grits line” in the U.S. that runs through Virginia, along the northern edge of Kentucky, over Arkansas and then down the center of Texas. Below that line are those for whom grits is a staple, akin to buttered bread and sweet tea. Those born above and west of the grits line (aka Yankees) tend to view grits as an oddity or a quaint regional tradition.

The truth is that grits is more all-American than apple pie. Corn, also known as maize, is an indigenous North American crop, only introduced to Europe, Africa and Asia after Columbus made his forays across the ocean blue.  Native Americans grew dozens of different corn varieties, most of which were dried or preserved as hominy. The dried corn could be stored whole or ground into some grade of meal. The natives shared their corn seeds and recipes with early European settlers, who promptly gave the name grits to a “porridge” made of coarsely cracked corn. Etymologists believe the word grits is an adaptation of the Old English word grytt, which refers to an oat or wheat-meal porridge.

Why grits took hold in the South (when the Algonquin Indians of New England offered corn dishes to settlers as well) probably has to do with basic agriculture. Most domesticated corn varieties like warm weather, and the South offers plenty of it. Hence the Southern table signatures of grits, cornbread, cornmeal mush, hush puppies, white lightning, and Tennessee and Bourbon whiskeys. Grits was reintroduced to northern climes with the 20th-century rise of regional American cuisines and haute-Southern eateries feeding re-interpreted grits to non-Southerners.

Most specialty stone-ground grits producers use simple dried corn to make a product that’s as close to field-picked as possible. However, hominy grits can be found in many commercial grits containers. Hominy—also a Native American creation—is dried corn that has been soaked, treated with culinary lime or diluted lye to remove the hull and germ, then dried again. Whole and cracked hominy can be used in soups and stews, coarse ground hominy is used for grits, and finely milled hominy turns up in masa harina and other flours. 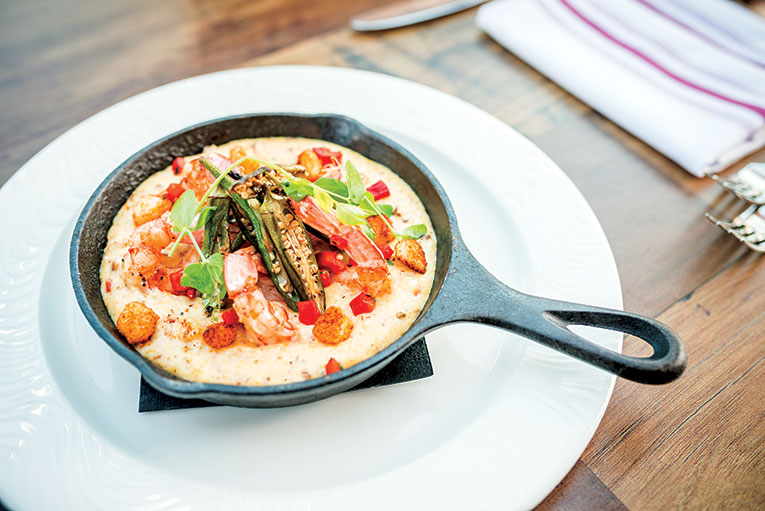 Bring the water and milk to a boil. Slowly add grits into boiling liquid, whisking constantly. Reduce heat to a low simmer and stir often, making certain the bottom is not sticking. Cook 45 minutes to 1 hour, until grits become tender. Add cheese, butter and pimentos, season to taste with salt and pepper.Serve with sautéed, local Florida shrimp and grilled okra. Add fried hominy for a nice crunchy garnish.

This article appears in the June 2015 issue of Orlando Magazine.
Categories: Food & Drink