When pets are diagnosed with cancer, their owners face tough decisions. Often the choice is to give these closest friends a fighting chance.

As a puppy, Huck earned his name after splattering himself with paint from a fence post in his Oviedo backyard. His owners, Carl and Melissa Wolary, decided the mischievous black Labrador reminded them of Mark Twain’s beloved Huckleberry Finn.

Over the next 12 years, Huck wormed his way into the couple’s heart, often sharing the marsh with Carl on duck-hunting outings, retrieving birds with the inborn gusto of his breed. But several months ago, the Wolarys noticed drops of blood in Huck’s water bowl, which they initially attributed to the milk bones they gave him to keep his gums healthy. The redness under one of his molars, however, continued to worsen, alarming them enough to take Huck to a walk-in clinic. The diagnosis: cancer—not an abscess, as they had hoped. 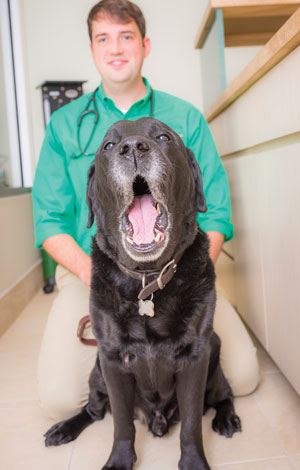 Huck, who underwent surgery in May, hasn’t needed chemotherapy.

“I had to pull over to the side of the road, I was bawling so hard,” Melissa Wolary remembers. “We called our regular vet and they said ‘he can wait until next week (to be seen), and I said, ‘maybe you can wait, but I can’t.’”

A quick visit confirmed the diagnosis. Huck wound up with a cancer specialist who said that no matter the tumor type, the first step was to get it out. Surgery took place in May, and so far, Huck is thriving, despite having three inches removed from his jaw. “We’re enjoying the stew out of him,” Wolary says with Southern flair. “He’s doing fantastically and he really doesn’t look all that different.” Nor does he need follow-up chemotherapy—at least not yet.

As advances in veterinary medicine enable pets to live longer, veterinarians are seeing increasing numbers of cats and dogs with cancer. Age is the main risk factor for developing these diseases, just as it is in people. An estimated 50 percent of dogs over age 10 develop cancer, while the incidence in cats remains murkier, veterinarians say, because cats generally go to the vet far less often. When they’re finally seen, their cancers tend to be more aggressive.

What’s considered “geriatric” in domestic pets, especially in dogs, also varies by breed. Although most cats and dogs over age 8 fall into the elderly category, size plays a role as well, according to Dr. Evan Sones, a medical oncologist with Animal Cancer Care Clinic, which recently opened a seventh Florida site in Orlando. “Miniature poodles, for example,” he says, “are not seen as geriatric until age 10 or 12, while a Great Dane is considered geriatric after age 5.”

Sones says most of his patients are big dogs like Huck, including Labrador retrievers, golden retrievers, boxers and the giant breeds, such as Great Danes and Wolf Hounds. Whether these dogs are actually at higher risk of developing cancer, or have higher cancer numbers because of their breeds’ popularity, Sones says, is unknown.

Dogs also can get an array of other cancers, including lung cancers, thyroid cancers or even melanoma, whose risk has little to do with DNA damage from the sun, Sones says. Dogs, cats and even horses can develop melanoma, he says, with dogs often getting these cancers in their mouths or toenails.

In Huck’s case, in fact, the original diagnosis was melanoma, but his pathology report identified an osteosarcoma instead, according to the Wolarys. Told this type of cancer was somewhat less aggressive, Melissa says, they decided to delay follow-up chemotherapy.

“One of the things with people and animals,” she says, “is no one knows for sure how to proceed until you’re way into the process.”

PET AND HUMAN PARALLELS
For University of Florida surgical oncologist Dr. Sarah Boston, that process hit so close to home four years ago that she chose to write about it. The resulting book, Lucky Dog: How Being a Veterinarian Saved My Life details her arduous journey through the health care system after finding a suspicious mass on her neck.

“Because I’d done thyroid surgery literally hundreds of times in dogs,” she says, “I knew I needed to have it checked out.” Like her canine patients, she underwent a CT (computed tomography) scan prior to surgery, which confirmed thyroid cancer and helped guide her treatment. Today, clearly grateful for the cancer’s early detection, she’s disease free—3 1/2 years out, so far.

Boston and her colleagues all see parallels today between cancer care in animals and their human counterparts, from surgery, radiation and chemotherapy to immunotherapy, which makes tumors more “recognizable” to an animal’s own immune-system attack. Also, recently, the first targeted therapy for mast cell cancers became available for dogs. It targets a molecular mutation associated with a poor prognosis, and raises hope other genetically based treatments eventually may emerge.

But advances in the field come at a slower pace than in humans, veterinarians say. For cancer, they have fewer chemotherapy drugs to choose from and study data on cure and remission rates from clinical trials remains limited. Moreover, except for some mast cell and soft tissue cancers, there’s little chance for cure. “That’s why I love being a surgeon,” Boston says, because when cancers can be successfully cut out, dogs, cats and other small animals “will not die of their cancers, but die of something else.”

Still, simply giving an elderly pet a few more quality years of life, she and others say, can be meaningful. “Most people are more attached to their pets today than in the past,” Boston suggests. “They want to know ‘what is it?’ and ‘what are my options?’”

In the case of Bonnie, a tiny black cat with “attitude,’’ the options seemed dire, according to her Winter Park owner, Sharol Brennan. When her veterinarian at Affiliated Veterinary Specialists in Maitland diagnosed mast cell cancer several months ago, the cancer had already metastasized or spread, into her colon, lymph nodes and spleen. In addition, Brennan says, 14-year-old Bonnie suffered from irritable bowel syndrome. Even if her spleen came out, doctors told Brennan, there were no guarantees beyond that.

Brennan chose to move ahead with surgery, followed by an initial round of chemotherapy. Her 6 1/2-pound cat responded so well to treatment, she says, that a recent ultrasound found the cancer had all but disappeared.

“The important part [of her story] to me has been she’s so spunky I can tell immediately if she’s not feeling well,” Brennan says. “She’s handled it all so well, there’s been no reason not to do this.” 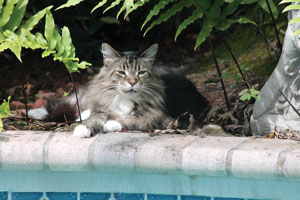 As long as Bonnie’s quality of life continues, she adds, so will her treatments and her frequent walks with her two West Highland Terrier housemates in a nearby park. “I’ve got my two boys on a leash and she just walks alongside them,” Brennan says. Three other cats remain home, where most days, “everybody just hangs.”

For pet owners, “time is a moving target,” when weighing the difficult choice of high costs against the needs of their cherished pets, says Dr. J. Armando Villamil, a medical oncologist with Affiliated Veterinary Specialists, and Bonnie’s veterinarian. “Some owners think three months is enough; others don’t think extending their pets’ lives by two years is worth it.”

Part of the problem is early detection. “Both dogs and cats mask the signs of illness quite well,” Villamil says, so by the time their cancers are detected, treatments tend to be more aggressive and more expensive.

Cancers also turn up when pets come in for unrelated reasons. “It’s just that the dog or cat is ‘off’ in some way, not acting themselves,” says UF’s Boston, adding that “the cost of finding a mass is not expensive, but treating it is.”

She says the most stressful part of any veterinarian’s job is helping owners decide whether to move forward with certain treatments. As a state employee, “I don’t make any more or less money if I operate,” Boston says. “I’m a strong advocate of pet insurance,” which removes cost issues and allows owners to focus on what’s best for their pets.

Without insurance, the costs can be daunting. Genevieve and Robert Cason have spent “$14,000 and counting” on their cat, Joe (pictured above), who strolled into their Lake Washington backyard near Melbourne and never left. Named after Joseph in the Bible because he’s “a cat of many colors,” Genevieve says, the Maine Coon was diagnosed with lung cancer in October 2012.

“He just stopped eating,” she says, the lone sign something might be wrong. A surgical oncologist removed the top part of his lung, then sent the elderly cat to the Animal Cancer Care Clinic’s Sones, for further treatment.

Joe underwent several rounds of IV chemotherapy, Genevieve says, then began taking an oral chemotherapy pill every other day, which he still takes today. “It will be three years since his diagnosis this fall,” she says, “and he’s as perky as he can be.”

As retirees, the Casons rely primarily on Social Security and several pensions to live. “We’re not rich,” she says, “but we can do it.” Six other rescue cats and two rescue dogs complete their household.

“We make decisions as we go along,” she says, referring to the care of their well-loved brood. “If the prognosis becomes really poor, we try to let them go.”