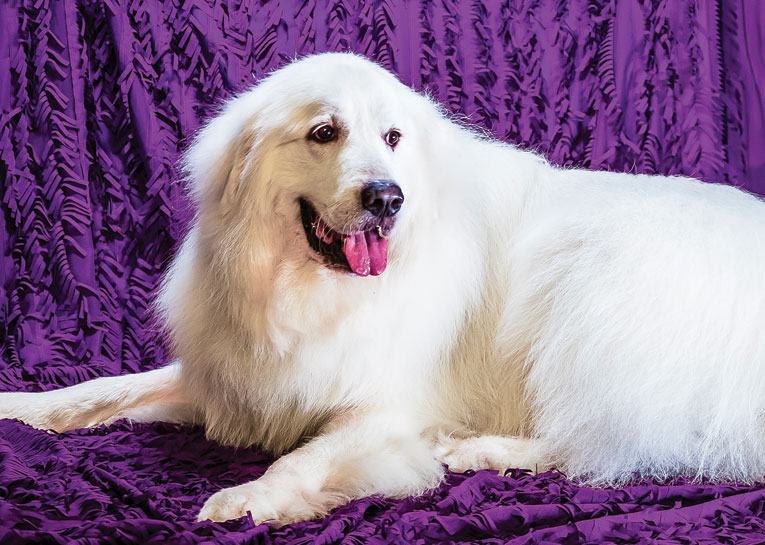 Those lyrics from the classic song “That Face,’’ covered by singers ranging from Frank Sinatra to Barbra Streisand, fit Sebastian perfectly. Just look at that lovable mug on the cover and below.

So it’s hard to believe that the gentle Grand Pyrenees was found wandering along a Tallahassee dirt road two years ago, thin and dirty, with another “Pyr’’ believed to be his son. Their owner was located but didn’t want the dogs anymore. Enter a rescue group, followed by a series of homes that didn’t pan out, and finally Tracey and Bo Rhodes of Sanford, who after fostering “Bashi’’ for a time gave him a forever home—theirs. (The other dog, Bear, was adopted by another family.)

A bit about the breed: Grand Pyrs originated in the Pyrenees mountains between France and Spain and were bred to guard livestock against predators.

So what’s 4-year-old Bashi like? Well, he’s really big. But there’s much more.

“He is genuinely the sweetest, most gentle boy,’’ Tracey Rhodes says. “He is very obedient and as with most Pyrs, he is best with children. Pyrs treat kids as their livestock and will guard them with their lives. He thinks he is a 125-pound lap dog and loves to lie on the couch or in bed with his people.”

“He is personally responsible for hundreds of rescue Pyrs getting adopted,’’ Rhodes says. “He also performs home visits for potential adoptive families. He was lucky enough to get rescued, and it is his duty to give back to
the rescue.’’

For information about fostering or adopting a Great Pyrenees, go to floridapyrs.org 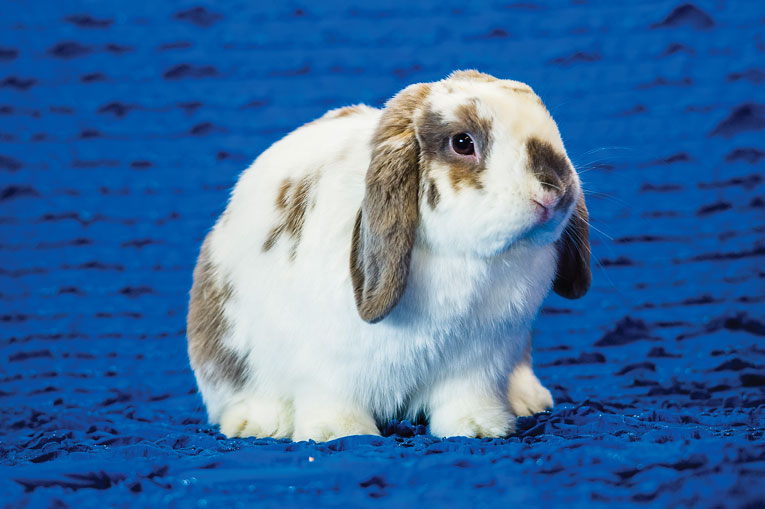 FAVORITE PASTIMES
Eating, relaxing, begging for treats (on his hind legs), grooming his mug with his paws, hiding under furniture.
FAVORITE TOY
Empty cardboard box. Treats it like a fort (but also likes to shred it).
YOU TALKING TO ME?
Once destroyed a watch with his teeth.
MOST ENDEARING QUALITIES
Charming personality. Butting your hand seeking a head rub, being your closest companion on the couch. Can leap onto said couch by himself, thank you very much.
INSTAGRAM KING
3,100 followers @finnthehollandlop
RABBIT RUN
Stages his own Bunny 500, doing rapid laps around the dining room table. Also entertains with happy jumps and twists into the air.
FAVORITE FOODS
Timothy hay, kale, romaine lettuce, carrots, bananas, apple and carrot-flavored biscuit treats. 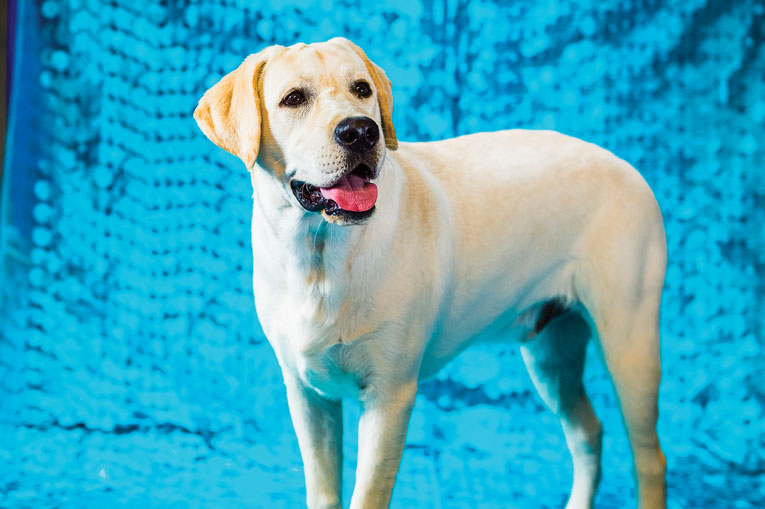 NAME GAME
Named after Cabo San Lucas, the resort city on Mexico’s Baja California peninsula that’s one of his owners’ favorite places.
LIFE’S WORK SO FAR
Playing with neighborhood boys, lounging on the couch, soliciting belly rubs, dismembering stuffed animals.
MUD DOGGIN’
Enjoys getting stinky and muddy (owners report “joy in his face”) during frequent lake excursions. Lots of fun, until it’s time for a scrubdown.
NOISE NUANCES
Unfazed by fireworks and thunder but terrified of the vacuum cleaner.
BEST FRIEND
Everyone.
BIGGEST OBSTACLE
A laundry basket left in the middle of the floor can leave him flummoxed.
PICTURE PERFECT
See more photos of Cabo on Instagram@Daily_Dose_of_Cab 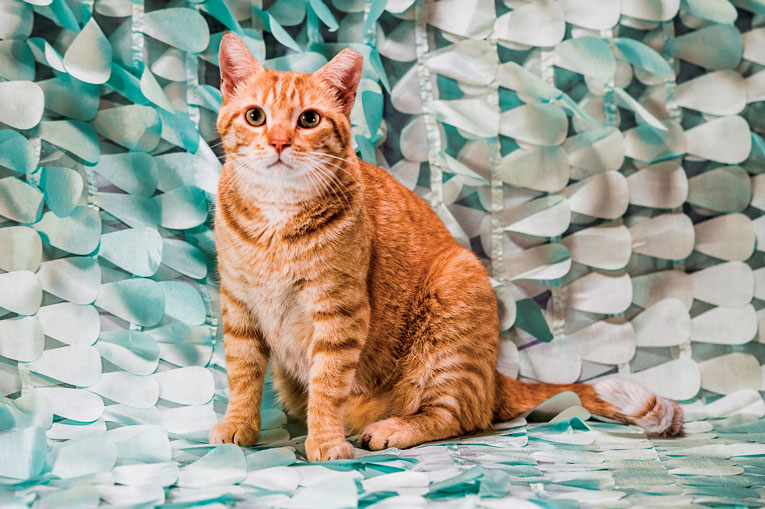 HOME ON THE RANGE
Cheeto lives at Freedom Ride, a therapeutic horseback-riding facility for adults and children with disabilities such as autism, MS, muscular dystrophy and brain injuries (freedomride.com).
ORIGINS
Two years ago, he showed up at Freedom Ride’s barn—very dirty and very thin. He immediately bonded with the staff and volunteers.
WACKY WORKOUT
Runs alongside therapy horses when they’re in the pasture.
PREFERRED PLAYMATES
The 13 horses (including two miniatures) and two other barn cats at Freedom Ride.
OFFICE DUTIES
Playing with pencils on desks, lying across computer keyboards.
MR. POPULAR
As the children arrive for their riding lessons, they always want to see Cheeto. Which makes him a therapist like no other. 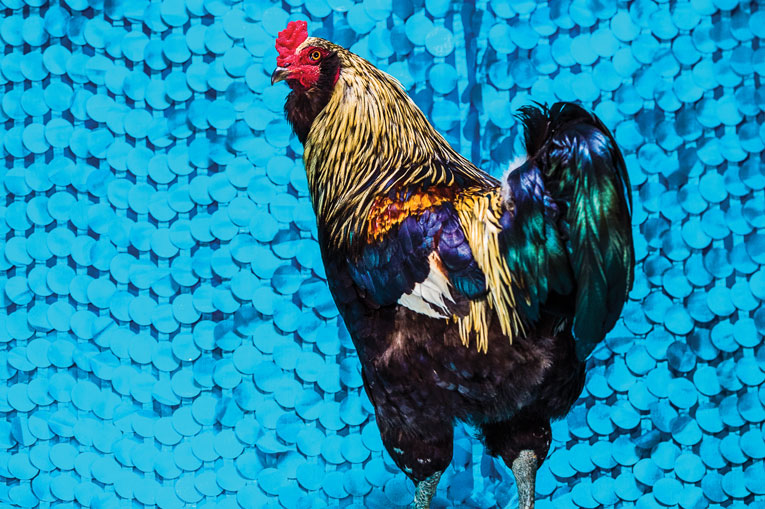 MEANT TO BE
Was named Mildred soon after hatching, but after the owners woke up one morning to a “Cock-a-doodle-doo!,” Mildred became Milfred.
HE HAS A BOOK
Is the star of Milfred Made the News, written by Jacobson for young readers. The inspiration came about after Milfred went missing for a day (and, yes, he had to cross a road). The book imagines what Milfred did during his adventure, from making new friends and escaping peril to learning life lessons.
FAVORITE PASTIMES
Looking for bugs, kicking a soccer ball, teasing the family’s two boxers through the fence.
SPECIAL ANNOUNCEMENTS
Gets worked up when someone sneezes. Renders alarm clocks irrelevant.
FAN PAGE
facebook.com/MilfredTheRooster 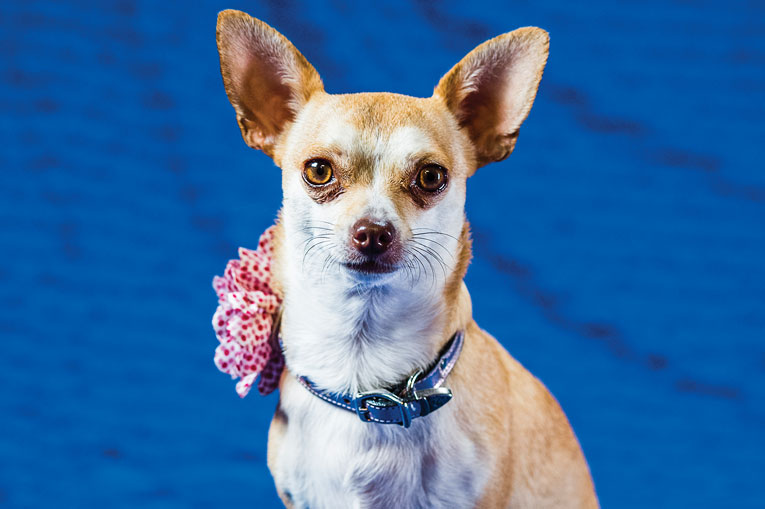 CLOSE CALLS
Rescued from a kill shelter in Georgia by a Florida woman. But that didn’t work because her dogs thought tiny Lolita was a squirrel and tried to kill her. An explanatory posting by the owner on Craigslist brought Wolfe and Dobbs to the rescue.
MOST ENDEARING TRAIT
Empathy. When her best bud, 11-year-old cocker spaniel Sheena, came home after having an eye removed because of glaucoma, Lolita licked her nose and refused to leave her side.
FAVORITE TOY
Large stuffed rooster (sorry, Milfred).
VA-VA-VOOM
Has a Yorkie boyfriend named Ozzy, who woos her with “pupsicles’’ and doggie cupcakes.
ADMITTED WEAKNESS
Fashion. Pulls dog outfits off the shelves at pet boutiques, eager to try them on.
MORE VIEWS
Instagram handle is @lolita_thefashionista 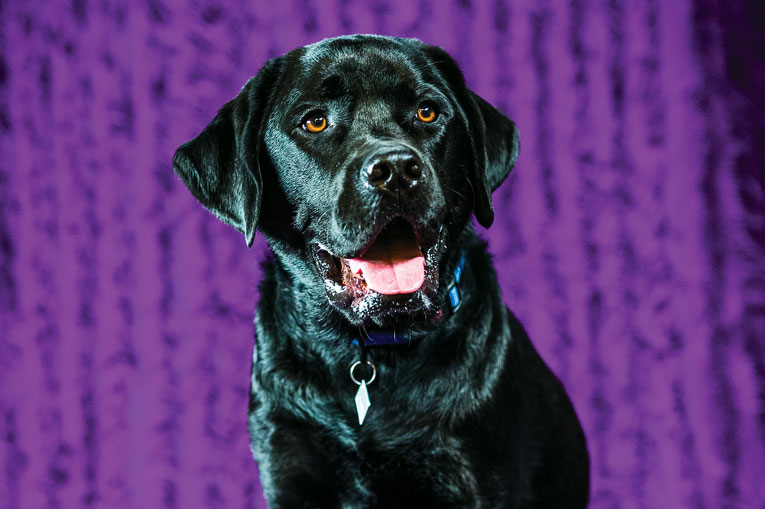 ACTION FIGURE
Named after the Hudson River. Owner hails from Canada near New York State, and Hudson the pup was in constant motion, like the river.
WATER DOG
Enjoys swimming in the dog park. When the leash comes off he’s in the water within seconds. He’s also proficient at gulping large amounts of water from his dish, then wandering around the house while it dribbles from his mouth.
FAVORITE TOY
Bright orange ball with little craters that hold treats. No surprise, then, that he’s totally focused while pushing it around the house with his nose.
JUMP STARTER
Catching treats in the air. A bit easier than getting them out of that ball.
SPECIALTIES
Cuddling, unconditional love, a friend to all.