FOR MOST OF us, the kitchen is the undisputed heart of the home. It’s not simply a space where we store, prepare and serve food; it’s also where we gather with friends and family, sharing conversation and making memories.

And with consumer confidence on the rise, more homeowners are planning to invest in their kitchens, according to the 2013 Houzz & Home Survey, conducted by the home decorating and improvement website houzz.com. More than 100,000 respondents participated in what Houzz bills as the largest survey of renovation and decorating activity ever conducted. The survey reports that 23 percent of respondents plan to remodel their kitchens in the next two years.

Many homeowners see a kitchen makeover as a way to improve their home’s property value, and Remodeling magazine’s annual “Cost vs. Value” report indicates that a homeowner can recoup about 72 percent on a minor kitchen remodel costing less than $20,000.

But renovating a kitchen with an eye toward resale shouldn’t be the primary motivator. A major project like this should address the needs, tastes and lifestyles of the current homeowners: you and your family.

We talked to three local homeowners who took that approach to their kitchen remodels and ended up with beautifully redone spaces that not only boosted their property values, but also enhanced their quality of life.

From Drab to Fab 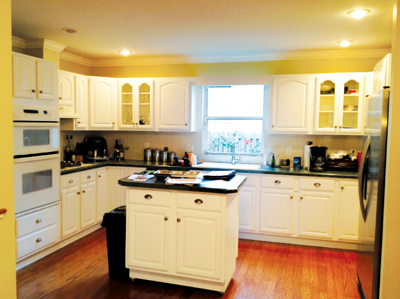 WHEN NICK COTTON purchased his Windermere home in 2010, the previous homeowner had spent significant time and money to remodel it—but had stopped at the kitchen. While the room wasn’t a disaster, the plain white cabinets and uninspiring design were “pretty mediocre compared to the rest of the house,” Cotton says.

Cotton didn’t tackle the project right away; he had his upcoming wedding to fiancée LaToya Johnson to focus on. But after they were married on the property in October 2011, it was time to renovate.

The couple worked with Dave Stanley of Busby Cabinets in Orlando and Jim Rahman of Westmont Homes in Winter Garden to transform their kitchen from bland vanilla to tasteful gourmet. The first step was expanding the 150-square-foot space by removing a wall and enclosing an unused opening to extend the kitchen, which increased wall and cabinet space.

Stanley capitalized on underused space by installing a wine cooler beneath a staircase and turning a small closet into a wine “cellar” with an iron gate. He also enclosed a stair landing to make a storage hutch: “This created a starting point on opposing walls to make the kitchen extend from the breakfast area all the way around to the dining room,” he says. “This created the feeling of a much more family-friendly kitchen for the hub of the house, with a great flow and open feeling instead of segmented areas.” The addition of a walk-in corner pantry dramatically improved the kitchen’s food-storage space. 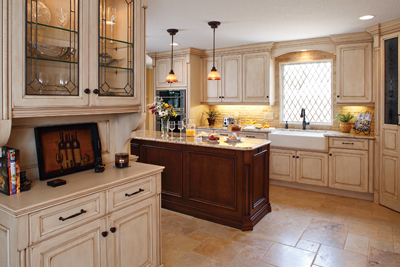 The Cottons are pleased with the $120,000 transformation. “The wife is extremely happy,” he adds. “It increased home-cooked meals from point-five a week to about three a week.” 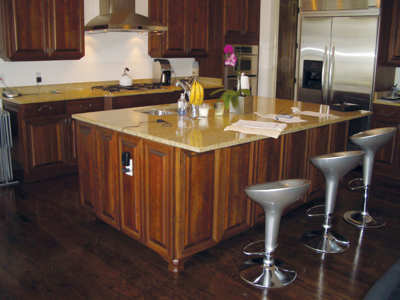 SOMETIMES A KITCHEN can be significantly improved without a total gut-out. Michael Abbott liked a lot of the elements in his Winter Park kitchen and chose to keep them—the cabinetry and the granite in particular—but there were issues with the space. “Because of the great room concept, the kitchen was impacting the entire living space. It felt very non-custom, and I wanted to change that,” he says.

Luckily, Abbott is a partner at Marc-Michaels Interior Design in Winter Park, so he had direct access to the expertise of a top-notch team, including designer Marc Thee.

For this space, Thee started by creating a visual anchor: “We chose to embrace the back wall, clad in stone, which creates the perfect unified backdrop,” he says.
The wall was a solid starting point, but Abbott had other goals as well: “We wanted to customize the feel of the island and create some privacy between the kitchen and family room,” he says. “The flexibility of this was important, so we could hide the dirty dishes, but open up when we were socializing.” Privacy was achieved through installation of movable stainless steel and Lumicor panels, which gave a modern architectural edge to the space while also providing a practical function. 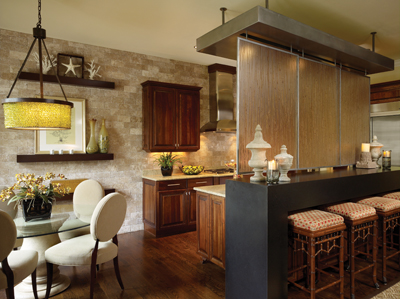 The large island, which was topped with the granite that Abbott liked, was also redesigned. “We focused on the island and really brought it to life with details,” says Thee. “We gave it a cleaner, fresher approach. We created architecture and visual interest.” The island’s  sleek bar-height end cap of honed black granite crisply defines the kitchen area with a contemporary accent that contrasts with the room’s more traditional elements. Calling the island his “goal post serving ledge,” Abbott says it’s “one-third bar, one-third hors d’oeuvre station and one-third hangout for our friends and family to gather.”

But the real beauty of this kitchen redo is the cost: Thee and Abbott achieved a vastly improved look and increased functionality for around $20,000. 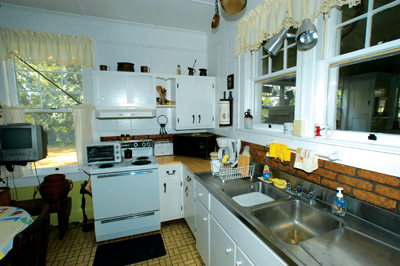 WITH THE PREVAILING tear-’em-down atmosphere in Central Florida, there aren’t many 70-year-old houses around these parts, and even fewer homes that have remained in the same family for seven decades.

But the Wall home near Davenport has just such a legacy. Built by the current owner’s grandfather in the 1940s as the family homestead on a citrus farm and cattle ranch, the home has housed three generations of the Wall family. Steve Wall grew up there and has many happy memories of the old-fashioned, linoleum-floored kitchen. “A lot of conversations happened around the kitchen table; it was the meeting place for the family,” he recalls.

That kitchen remained largely unchanged over the years, as his grandparents and parents didn’t see any point in updating the space. Or anything else, for that matter. “My dad was in his eighties before I could convince him to put in air-conditioning,” says Wall.

But when Wall inherited the home a few years ago, it was time to renovate. He enlisted the help of Orlando custom builder and remodeler Victor Farina of Farina & Sons, Julie Collier of Signature Kitchens in Lake Mary and Grant Gribble of Gribble Interior Group in College Park to create a kitchen that offered every contemporary comfort while also honoring the history of the home. 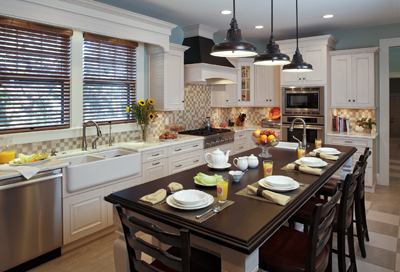 The renovation was a complete gut job, with every wall, the floors and ceiling removed, and all of the electrical and plumbing systems replaced. The size was expanded slightly from 238 to 294 square feet, and homage was paid to the home’s original era with a farmhouse apron sink and retro-style cabinetry, hardware, lighting and tile work. Citrus prints that Wall’s father had hand-painted in the early 1930s hang on the walls, nostalgically referencing the family’s citrus-farming past.

Wall is happy with his $65,000 renovation. “I’d like to think that my parents would be proud of what I’ve done here,” he says. “I’m so thankful to have been blessed with this place.”

This article appears in the October 2013 issue of Orlando Home and Garden.
Categories: Makeovers