As a child, Ink Master contestant Jime (pronounced “Jimmy’’) Litwalk dreamed of becoming a Disney animator. Though his childhood dream changed, his artistry and passion for animation continues to shine in his work as a tattoo artist.

A Detroit native, Litwalk developed his talent as an airbrush artist while working next door to a tattoo parlor; he became fascinated with the culture. After high school, he took on a rigorous tattoo apprenticeship. “It was two years before I even put needle to skin. I needed to gain confidence in myself before jumping in and started off doing tiny pieces to build that confidence.” 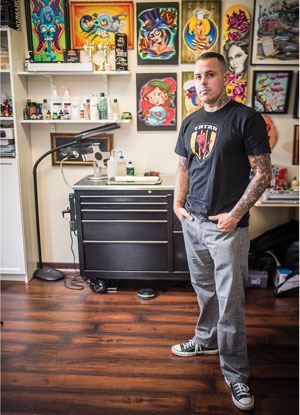 His career blossomed when he moved to Las Vegas to work at Hart & Huntington, the tattoo company of Carey Hart (motocross racer and husband of singer Pink). While in Vegas for six years, Litwalk appeared on various reality programs tattooing celebrities including The Real World, Nitro Circus and The Hills.

Ink Master, the competition series on the Spike channel, “was something I kind of fell into,” he says. Originally chosen as a guest judge, Litwalk captivated producers with his lively personality and was asked to be a contestant instead, coming in second place in Season 3 (2013). “Filming one episode takes three to four days and what people witness is basically 42 minutes of what happened during those days. It’s like watching sound bites; you’ll hear yourself say something and know there was more to the story. It was a cool experience, but it’s all about perspective.”

His artistic background and love of animation is reflected in his expressive tattooing style, categorized as “new school,” which encompasses cartoons, illustration, exaggerated features and vivid color (some Litwalk examples range from a green reindeer to a winged cupcake to a buxom female pirate). On the rare day when he isn’t tattooing or working the convention circuit, the father of two is at home with his family, keeping up with his sketching.

Litwalk has worked at Ascension Tattoo on Mills Avenue in Orlando for a little over a year. “In a shop with nine guys, there are nine different personalities. ‘Variety is the spice of life’ definitely applies to this studio. We’re a dysfunctional family, but it works well.”

“I’ve tattooed my mom. I met my wife through tattooing. All my experiences and travels have stemmed from tattooing. I’ve never had a ‘regular’ job where I had to punch a clock and I wouldn’t change a thing.”