A century before the Walt Disney Company built its utopian town of Celebration, two dozen settlers from Iowa founded a place called Fairhope on the eastern shore of Mobile Bay. In this Gulf Coast Alabama town, they envisioned a “fair hope” of success for all its residents. They chose the most beautiful spots—wide bluffs and beaches—and preserved them as parkland for future generations.

About 22 miles north of the Gulf of Mexico, Fairhope is halfway between Seaside, Florida, and New Orleans. From that small group of Iowans, this idyllic town is now home to some 18,000 residents who are enjoying life just as those early settlers had planned. 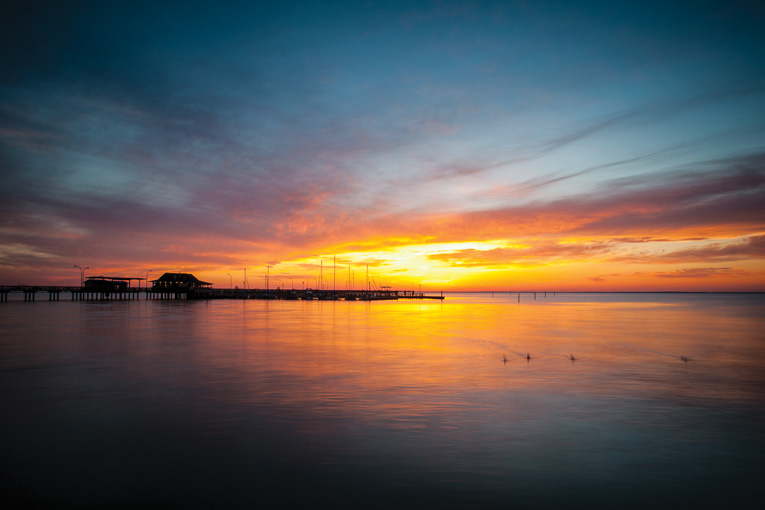 If you have preconceived notions about Alabama (most people do), Fairhope’s charm will change your perspective. The town has been compared to Carmel, California, though, make no mistake, it’s Southern to the core. Quintessential Alabama writers, such as Winston Groom, author of Forrest Gump, and Fannie Flagg, who wrote Fried Green Tomatoes at the Whistle Stop Café, have called this place home. No doubt they have drawn inspiration from the area’s magnificent live oaks and the sunset-soaked bay, as well as a big dollop of Southern hospitality.

J.D. Crowe was an editorial cartoonist in California working for the Los Angeles Times when he found Fairhope by accident while traveling.

“I have heard several stories of other folks with similar experiences. They were just driving through on their way to somewhere else, fell in love with the place and stayed,” says Crowe, who’s now lived in Fairhope 17 years. “From the gauntlet of live oaks along the bay, to flower-lined streets and little shops downtown, it’s got personality. It’s got culture, too. It’s known as an artist and writers’ colony, and nowadays the music scene is growing like kudzu. Most people who come to visit us from other states usually say something like, ‘I had no idea a cool place like this existed in Alabama.’ ” 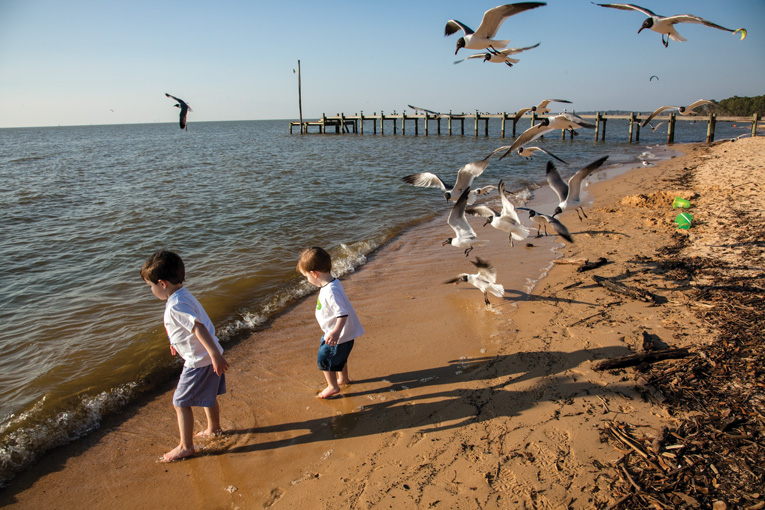 Take the kids to the public beach on Mobile Bay and spend an afternoon feeding the ducks and water birds (CAROL M. HIGHSMITH )

Just three blocks east of the bay is downtown Fairhope. The walkable district is filled with overflowing flower baskets and tree-lined streets that twinkle with lights from Thanksgiving through Mardi Gras.

You won’t find a Starbucks here, and the nearest Walmart is five miles outside of town. Along Fairhope Avenue, a classic early 1900s main street, and its surrounding blocks, you’ll find hip restaurants like Pinzone’s, Panini Pete’s and Red or White wine bar, along with shops like Andree’s Wine, Cheese & Things, Fantasy Island toy store and CK Collection designer boutique. The town mayor owns the longtime corner bookstore, Page & Palette. Next door, Mr. Gene’s Beans perks up shoppers with a Fairhope Float, a dreamy mix of coffee and ice cream.

The Eastern Shore Art Center is worth a visit, along with the Lyons Share Framers and Gallery, Nall Art Gallery and Windmill Market. Alabama native and Salvador Dali protégé Nall is one of the town’s—if not the state’s—most eccentric and flamboyant characters. His artworks feature flowers such as camellias and irises—with some touches of Dali-style surrealism—all with elaborate mosaic frames.

From downtown, hang a left at the public fishing pier and follow the bike trail three miles south along the bay to the Grand Hotel, established in 1847 in Point Clear. Well-dressed children run around the front lawn playing croquet and climbing oak trees while their parents sip cocktails on the patio. Every day at 4 p.m., the hotel serves complimentary tea and cookies before the ceremonial firing of the cannon on Mobile Bay. The historic property features two premier golf courses and one of the best spa facilities in the Southeast.

Just past the Grand Hotel is the boardwalk, a two-mile stretch of million-dollar summer homes where wealthy Mobile families have retreated for over 100 years. 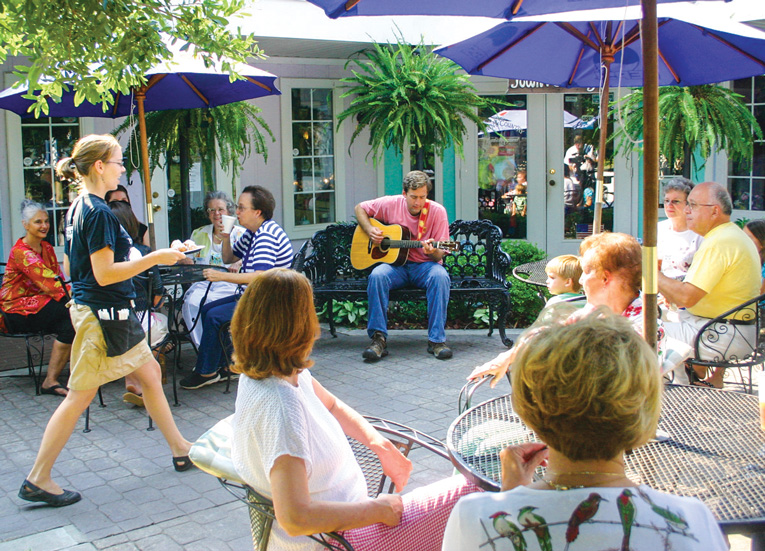 You can get your fill of fresh seafood at a multitude of restaurants around town. There are casual places like Wintzell’s, where you can slurp oysters or scarf down po’ boys, and fine-dining establishments like The Fairhope Inn and Camellia Café for specialty local dishes like snapper “hoppin’ john,” shrimp sardou, sautéed redfish and seared scallops with spaghetti squash.

Just be sure to time dinner so you don’t miss the sunset. Walk out on the pier or set yourself down on the bluff and take in the spectacular, ever-changing colors of Mobile Bay.

Fairhope offers plenty to do throughout the year—from arts and film festivals to boutique shopping to gallery hopping. cofairhope.com, beautifulfairhope.com

Fairhope’s Festivals
Downtown Fairhope is lively year-round, with a major arts festival every spring, a film festival in the fall and a huge fireworks display for the Fourth of July. The city also celebrates a family friendly version of Mardi Gras. eschamber.com

Ain’t Life Grand
The historic Grand Hotel is a four-star resort on Mobile Bay. Even if you’re not staying on property, visitors are welcome to enjoy the spa and restaurants. And be sure to check out the decadent Sunday jazz brunch. marriottgrand.com

Day Trippin’
The sugar-sand shores of Orange Beach are less than an hour away. Historic Mobile is also a worthy destination, with the USS Alabama battleship, a Mardi Gras museum, Bellingrath Gardens and GulfQuest, a maritime museum. alabama.travel

In Full Bloom
Fairhope even promises a rose garden, with 2,000 rose bushes surrounding the fountain by the quarter-mile-long fishing pier. Fairhope’s numerous flowerbeds, including its iconic 30-foot floral clock, are changed every six to eight weeks.