The jolly old elf who is “older than Methuselah” admits the best present can’t be put under the tree.

Has Christmas become too commercial? Santa laughs at the notion. “Christmas has always been about giving. As long as you focus on giving and not receiving, the spirit of Christmas is never lost.”

Outsourcing toy manufacturing. “So few children appreciate handmade toys anymore.” As a result, Santa has had to outsource some of the high-tech products. “But never assume my elves don’t oversee every assembly line,” he says with a wink.

Choose to believe in magic. Though technology has affected toy manufacturing, toy delivery continues to occur through the same age-old, mysterious process. So how does he do it? “I have a list, which I check twice, and a team of fast reindeer. What else do I need?” 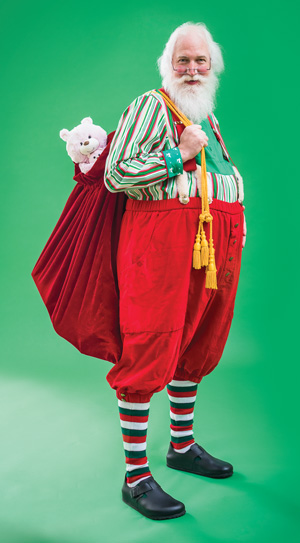 What happened to coal in stockings? Santa won’t admit to pressure from coal industry lobbyists but says, “It didn’t seem fair to paint coal in a negative light in these times.” The alternative: “Maybe those people who would have received coal just don’t get their favorite gift,” he says with a slightly raised bushy eyebrow. Consider yourselves warned.

Tips for snack time. Santa (mostly) fasts from sugar throughout the year in preparation for his annual cookie-
eating marathon. “Nothing tastes as good as homemade cookies,” he says with a twinkle in his eye.

A Coke and a smile. An icon for The Coca-Cola Co. since the 1920s, Santa hints that the company might have sweetened the deal. “I have been known to carry a case or two packed in snow on Christmas Eve,” he confesses.

Elves can be pranksters. Santa admits there’s a lot of truth to the legends about impish elves and that he often must remind them who’s in charge. “Maybe it helps that I’m always the biggest guy in the room,” he laughs as he pats his round belly.

Behind-the-scenes assistance. Each of Santa’s helpers is carefully screened and reports, directly or indirectly, to the big guy in charge. “I’m very busy preparing for Christmas Eve, so I’m grateful for the help. But I have been known to make an appearance here and there.”

Greatest presence. Sometimes Santa works behind the scenes. “Back during the great war, a little girl asked me to bring her daddy home for Christmas,” he recalls. “I’ve since managed to do that a few times. It brings more joy than any toy.” He pauses and smiles. “But they still get toys, of course, like all good girls and boys.”

Cozy time with the missus. Each Christmas season, Santa and Mrs. Claus take a break with a bowlful of homemade kettle corn (one of his favorite treats) and watch the classic holiday movie, It’s a Wonderful Life. “George Bailey learns the greatest gift is life itself. That’s something even I can’t give.”

Happiness equals longevity. “I spend every day of my life doing things that make other people happy. That’s worth sticking around for, don’t you think?”