Story of an… Exchange Student

Native Bulgarian Miroslav Goranov attends UCF to experience life as a U.S. college student and grow his skill as a wildlife photographer.

“I’m literally a child of the world.” As the junior majoring in social innovation explains, “I left Bulgaria when I was 17. Then I moved to London, where I graduated high school. After London, I moved to the Netherlands, where I still technically live. But I spent a lot of time in South Africa.” After completing his one-semester stint at the University of Central Florida, Goranov was heading to Kenya to photograph wildlife.

Stiff competition. He won one of five slots available at UCF and other schools worldwide through the exchange student program at his university in the Netherlands. “I believe my application letter and good grades helped me get the upper hand.” 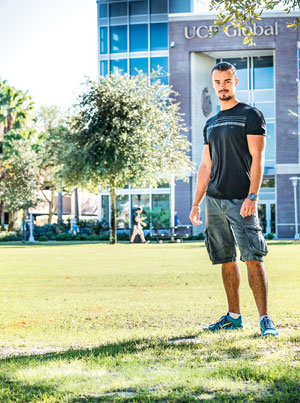 Flying blind. Goranov had no preconceptions about Florida and chose UCF “because I’d heard the student life here is quite different than anything I’d ever known. If I did have an expectation, it would be that there would be a lot of wild parties.”

“Rabbit” or “wabbit”?  “I learned English from cartoons,” which he watched in English with no Bulgarian subtitles. “I used to watch every episode about 20 times, so when you see a rabbit jumping, you learn the word ‘jump.’ By the time I got into the fifth grade, we began studying English in school, but I was already ahead of everybody else.” Goranov also speaks Dutch, German, Spanish and some Zulu.

When your life flashes before your eyes. He arrived in Orlando during a summer storm. “I never knew Central Florida was the lightning capital of the world.” But did he capture a photo? “That was the last thing I was thinking about,” he laughs. Though somewhat frightened at the time, the self-admitted daredevil would love to follow and photograph stormchasers through America’s heartland.

American Life 101. Upon arriving at UCF, where he shared an apartment with a German student, Goranov and his fellow internationals got an important lesson in American culture when a professor told them, “People will say ‘hello,’ and then they’ll say ‘How are you?’ But nobody cares how you are, unless they actually care how you are.”

Risky venture. “Orlando is the third most dangerous city for pedestrians. There are too many cars here.” Yet Goranov still prefers to travel by foot. “If I have to walk for an hour, I’ll walk for an hour.”

You’ll find him at Qdoba. Most American-style food has found its way to Europe, but Goranov got hooked on Tex-Mex during his time here. “I eat tacos and burritos all the time.” He even traveled to Mexico for a few days over Thanksgiving break to enjoy the real deal.

“I need to be everywhere.” After his stint in Kenya, Goranov hopes to tour South America. He has no plans to stop traveling even though he has forged friendships here and elsewhere. “For me, home is not a place. It’s a feeling. It can be the worst place in the world, but if you’re with the right people, I think they can create that feeling of home for you.”