Story of a… Zamboni Driver

Jesus Garcia has a cool job, literally, as ice resurfacer for the RDV Sportsplex and Amway Center.

A career about-face. “Before working in ice rinks, I was in the military doing counter-narcotics and anti-terrorism work.” After serving, Garcia joined the RDV Skate Patrol (support crew during public skate). However, he had little skating experience and soon found his place on the ice driving the Zamboni—technically a brand that became the generic trademark for ice-resurfacers. He earned ice maintenance and equipment operation certification from the U.S. Ice Rink Association. 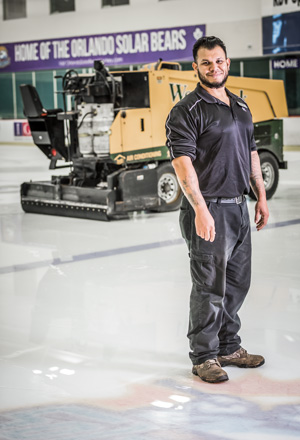 A good sport (with two bosses). For eight years, Garcia has maintained RDV’s two rinks for hockey (both recreational leagues and Orlando Solar Bears practice), figure skating, public skate, speed skating and curling—all of which require varying ice depths and temperatures that he fine-tunes. Seasonally at Amway Center, he works Solar Bears games and events such as Disney on Ice.

Driving with some distractions. “There’s a lot of multitasking, especially at turns, with a sequence of things to be done while being aware of officials, players and crew on the ice.” Using a turnstile and controls, Garcia cuts the ice, removes shavings, washes dirty ice, and dispenses and smooths clean water to freeze.

No need for speed. The Zamboni is powered to 9 miles per hour. “I’m a grandpa in my own car, too. I drive a ’94 Toyota Corolla; she’s a beauty.”

It’s a science. “We have our CIMCO [refrigeration] system, which runs with brine and ammonia to keep the rink cold. Our munters [dehumidification] system pulls humidity out of the air so condensation doesn’t build up and cause ice mounds. There’s also a science to how cold the ice is per activity.” Colder ice offers hockey players traction; milder ice grants figure skaters softer landings.

Beat the heat. Rink air temperatures average 55°F; ice averages 12 to 20°F. Garcia, a Florida native, says, “I love working in the cold environment, especially on days that are 90 degrees outside!”

Real Orlando magic. Basketball and hockey seasons overlap so Amway Center flooring is adjusted to accommodate both the Orlando Magic and the Solar Bears. “We don’t pull the ice out during season. It stays on the bottom layer.” Insulated fiberglass panels are placed over the ice, followed by sections of basketball parquet.

No “I” in team.  One driver steers the Zamboni but Garcia insists, “It’s not a one-person job.” Solar Bears games operate with a five-person ice team.

On thin ice. “On my first RDV shift, I ripped part of the yellow kickplate [where boards meet ice] off the wall.” Repairs are made quickly when the game clock is ticking, but there are times when “the Zamboni has died on the ice and delayed play.”

Freezing up. “Working my first Solar Bears game was the most nervous I’ve ever been. You drive down a hallway to see 10,000-plus people staring, and you think, ‘Don’t mess this up!’ ” Today, he loves the crowd’s presence and describes fans as family.