Story of a… Wildlife Rescuer

For Debbie Helsel, Back to Nature Wildlife Refuge in Lake Nona is home.

Pooh-poohing playtime. Always smitten with wildlife, the Colonial High School graduate once contacted refuge founder Carmen Shaw to express her desire to come play with the animals. “She said, ‘You can come clean raccoon poop,’ ” Helsel recalls. As for the animals, Shaw added, “They’re not play toys. They’re wild animals. The goal is for them to go back into the wild where they’re supposed to be. We feed them, clean them and leave them be.” 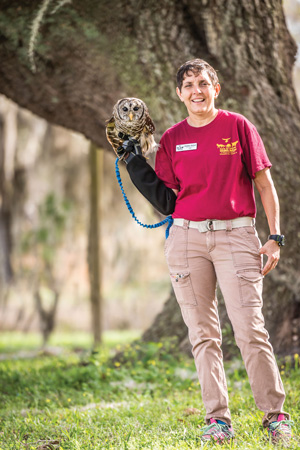 “I never left.” By 1990, Helsel had pushed aside the notion of volunteering and began working as a surgical technician with Orange County Animal Services. As it turned out, Helsel learned she would be working directly with Shaw, who rehabilitated some of the animals the county received for care. On her second day of work, Helsel and her supervisor drove to Back to Nature. “As soon as I got there, I knew I was home.” She began volunteering immediately and took over as executive director of BTN in 1999.

Remaining vigilant. “The prevalence of rabies has been increasing in the state, and it’s not just the raccoons. Bats are high up on the list, as are foxes, bobcats and otters,” Helsel says. As a result, high-risk animals “are only allowed to be handled by people who have their rabies pre-exposure shots.”

Not everything can be saved. A woman recently brought in a crow with a damaged wing. “He has to be euthanized,” Helsel sighs as she surveys the bird’s injury. “There are legalities with a lot of the wildlife we get. With certain impairments, you just don’t have any options.”

Her secret crush. The refuge cares for about 3,000 animals representing up to 50 species a year, but opossums are Helsel’s favorite. “There’s just something about them. They capture my heart in a different way than the other animals do.”

Hurricanes take a toll. “When a lot of trees are down, you have a loss of home for the animals. The nests are down. The mothers are killed.” The morning after a hurricane, “we have long lines of people waiting to give us animals. Sometimes we have hundreds [of animals] in our first few hours of daylight after a storm.”

A brighter future. The 20-acre refuge and educational center near Lake Nona recently was awarded $3.5 million through an Orange County initiative that will fund needed improvements and expansion. “Still, we really need more paid staff.” The refuge relies heavily on about 50 volunteers, plus interns.

The dangers of development. “A lot of these animals are being pushed out of their natural environments, and they are being forced into smaller areas. We need to leave some space for them. Otherwise, the only place you’ll ever see these animals is in zoos or places like ours. We would rather see them in the wild.”

Finding her own refuge. “Usually for me to have a day off, I have to get on a plane or drive someplace my phone can’t reach,” says Helsel, who enjoys going on crystal digs in Arkansas.