Story of a… Wedding Officiant

With 10,000 weddings under his belt, Kevin Knox tells couples that the ceremony is “not as hard as you think.” 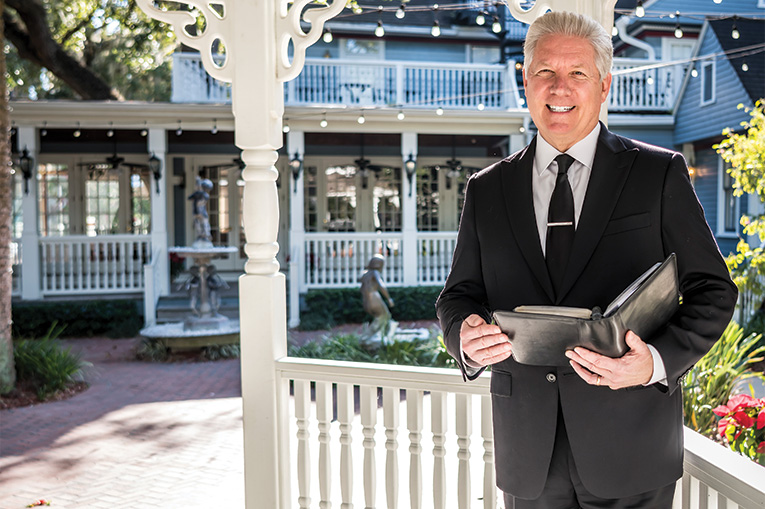 From pastor to chaplain to officiant. Knox began his career as a Methodist pastor. But because of his dyslexia, “sermon preparation was much harder for me than it was for my peers.” He transitioned to hospital chaplain and then to full-time officiant. “Weddings are very uplifting and fulfilling. I probably would have burned out as a chaplain.”

Then vs. now. “My first wedding was in 1981. Back then, you had a certain ceremony—you got what was in the book—and you delivered it as the minister. Nowadays, couples want to give input and feedback on what kind of ceremony they want. One of the best things I’ve done is to offer a ceremony planning kit that allows couples to pick and choose” and personalize their wedding script.

First comes love, then comes counseling. A divorcé who has since remarried, Knox researched to find where his first marriage went wrong. He then compiled what he learned into an online premarital counseling course that he recommends to all his couples. “The newest research about a working relationship shows that it is important to maintain the friendship. Learning what the other person needs and how to meet those needs is paramount.”

The rule of two. For each wedding ceremony, he coaches couples to remember “two hands, two eyes and two smiles. It’s as simple as that. Then at the end, there are two kisses for two seconds. If you know that, you know 90 percent of the ceremony.”

At least a meteor didn’t strike. Knox recalls one of the most disastrous weddings he has officiated. “The bride’s sister couldn’t get the boombox she brought going. She was cursing under her breath during the bride’s entrance. The bride’s escort showed up semi-drunk. The best man who had the rings started throwing up. The maid of honor had a lizard jump on her dress, and she screamed. The photographer stood in an ant pile and started dancing. All that took place in a matter of about a minute.”

Jumping the shark. One of Knox’s most unusual ceremonies took place at SeaWorld Orlando. Two cast members had their wedding “inside a cage in a shark tank. I was in a little room with picture windows that looked into the tank. The bride’s dress was lined with shells to keep it weighted down, and the couple had helmets on. There was an audio set up between the room I was in to where they were in the tank. So when I asked the groom, ‘Do you take this woman to be your wedded wife?’—he held up a sign saying, ‘I do.’  And vice versa.”

Wing bearer. A red-tailed hawk delivered the rings at one of Knox’s weddings. At the appropriate time, the trainer “stuck his leather glove up in the air, and in one swoop from about 30 yards back, a red-tailed hawk came down and landed on his arm. It was just beautiful.”

No more “mawage.” One couple asked Knox to officiate in the style of a comedic wedding scene from the movie, The Princess Bride. “I did that once, and I said I would never do it again. It fit the wedding style, but it wasn’t my style.”

This article appears in the January 2020 issue of Orlando Magazine.
Categories: People
Tags: kevin-knox, marriage, story, wedding, wedding-officiant, weddings
Want to read the whole issue? Download and read this issue and others on Magzter.