Once a homeless addict living under I-4, Brian Smith works the red kettle drive because “it saved my life.” 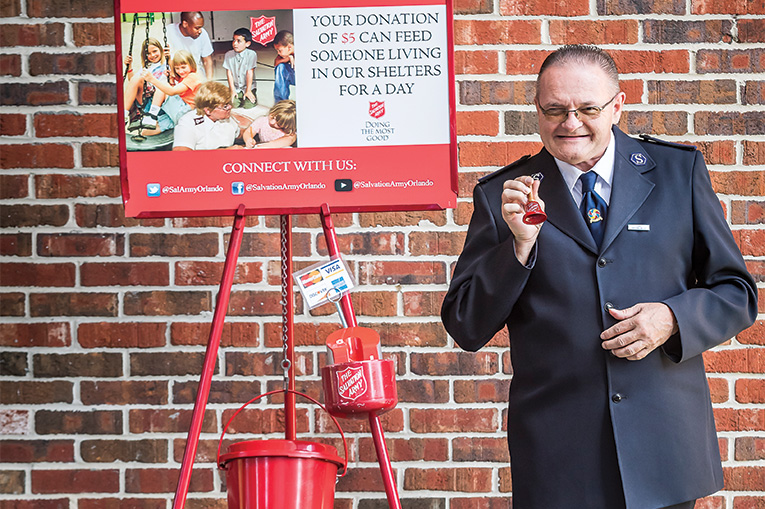 Loss, gain and more loss. A New York City native, Smith says the rapid loss of several family members “led to my addictions.” Homeless, “I won $37,000 in the [New York] lottery. I figured I’d come to Florida and get away from the gangs and the drugs. Two months later, I was living under I-4 and OBT. The money was gone”—all spent on drugs and alcohol.

Hope found him. In 2003, someone from the Salvation Army saw Smith sleeping outside. He had been homeless 17 years. “Within a week, I was in the Adult Rehabilitation Center of the Salvation Army,” the same place where he now works full-time.

Sixteen years of clean living and tireless service. Smith immediately starting volunteering with the Salvation Army doing outreach and visiting prisoners and patients at the VA hospital. “My volunteer hours are probably 40 hours a week.” Ten years ago, he began ringing the bell for the red kettle campaign. “I came from nothing to something. Now it’s time to give that back to others, to give them hope so they can have a better life.”

A testimony for change. As people drop money in the bucket, “I tell them how that helped me, how that multiplies itself. Without that bucket, we wouldn’t be able to help people. Where would I be without that bucket—not only me, but many others?”

For whom the bell takes no toll. A fixture at the Edgewater Drive Publix for years, Smith now takes “whatever spot is open,” sometimes working 12-hour shifts over the holidays. “You ring [the bell] every second for a 12-hour shift,” up to 43,200 rings. But, he adds, “it doesn’t bother me.”

A dance marathon. Smith won’t sit at his station, even for long shifts. “I stand there the whole time. I’ve got a little radio, and I play Z88.3 [contemporary Christian] music. I jump and dance around.”

A good day. “Every day is a good day,” Smith says with a smile. But in terms of a daily kettle return, “it would be nice to get a couple of thousand dollars.” Weekends are more lucrative for the campaign than weekdays.

A judgment-free zone. When people walk right by, Smith doesn’t judge. “Maybe some people can’t support it. You don’t know what they’re going through.” He’s grateful for all gifts, even the smallest one. “If they put a penny in there, it’s a blessing.”

Checks, cards and valuable coins welcome. “Last year we got a gold coin in one of our buckets. It was worth about $2,500.” One year someone put a $500 check in Smith’s bucket. “We have credit card swipers now.”

How every shift begins. “Before I put that bucket out there, I pray over it. I say, ‘Lord, may people rejoice in Your name and give to this bucket to help other people.’ It works. I’m the first one [to give].”

A daily contest. A good-natured competitiveness exists among bell ringers. “Everybody will say, ‘Oh, I beat you today.’ Well, guess what?” Smith then puts money in the bucket. “Now I beat you,” he tells them.

This article appears in the December 2019 issue of Orlando Magazine.
Categories: People
Tags: bell-ringer, bells, Christmas, donation, giving, salvation, story, story-of
Want to read the whole issue? Download and read this issue and others on Magzter.