Story of a… Roller Derby Queen

A forensic scientist by day, Kiersten Kevin—aka Amina Acid—brings an analytical passion to her sport.

She wanted a hobby to pursue with like-minded people. A weightlifter—not a team sports person—Kevin “wanted a physical hobby, and I thought it would be nice to have friends, girl friends in particular.”

Enter a documentary about roller derbies on A&E. Though she had never skated before, “I thought, ‘That’s so amazing! If I can find out where that’s happening, I can at least try out.’ ” 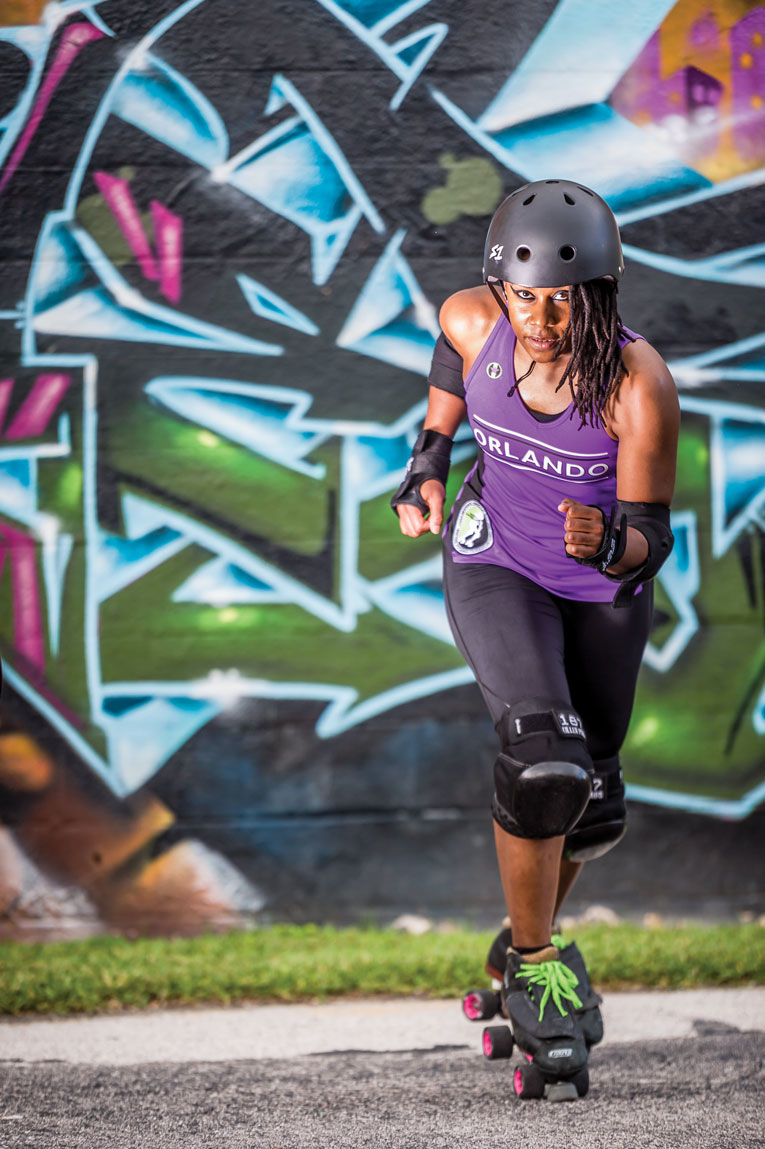 It was a sign. “I forgot about roller derbies till I was driving one day. There was a roller rink near my house, and the sign said, ‘Roller Derby Sunday.’ So I went and saw a game.” She was introduced to one of the players and got a recruitment card. “The rest is history.” In 2010, Kevin joined the Orlando Psycho City Derby Girls. The following year she became a founding member of the Arkham Assailants, which is undefeated this season.

The science to choosing a derby name. “The first name I had was DyNAmite, because I’m a DNA analyst.” Problem was, it wasn’t original. When her organization was in the process of becoming part of the Women’s Flat Track Derby Association, everyone had to choose a name that didn’t already appear on an international roster. “I wanted something kind of sciency, so I thought, ‘Amina sounds like a girl’s name.’ Amina Acid—that’s biochemistry right there.”

It’s not your grandmother’s roller derby. Forget the days of hair-pulling, trash-talking and showboating. The modern derby, though still dangerous, is above-board and replete with safety gear. “Today’s derby is a full-contact sport, and there are so many rules.”

Apologies expected and accepted. “A lot of people don’t understand that derby is not about hurting anyone. It’s about moving them out of the way—onto the ground, perhaps. Anytime I’ve seen anyone get hurt, everyone involved is like, ‘I’m so sorry. Is there anything I can do?’ ”

Keeping fit. “Cross-training is important. I do a lot of body-weight exercises to keep my body functional. I don’t like to run, but it’s good for my endurance.”

Tough yet tender. Kevin tears up when she talks about the bonds among her fellow derby girls. “I’ve never met people who were more supportive. It’s why I’m still doing it. They’re like family.” Her husband, known as Mr. Acid, is among what they call the “derby widows”—the loved ones who support the team through multiple practices each week and games on Sundays.

Mom can’t watch. Kevin’s derby injuries include a split lip, a black eye and whiplash. “My mom has never seen me play. If someone would hurt me, she doesn’t want to have to stop herself from running out on the track and going crazy.”