Story of a… Prosthetist

“There’s not a lot you can’t do. You just need to find a new way to do things,” Scott Saunders tells his patients who are getting new limbs. 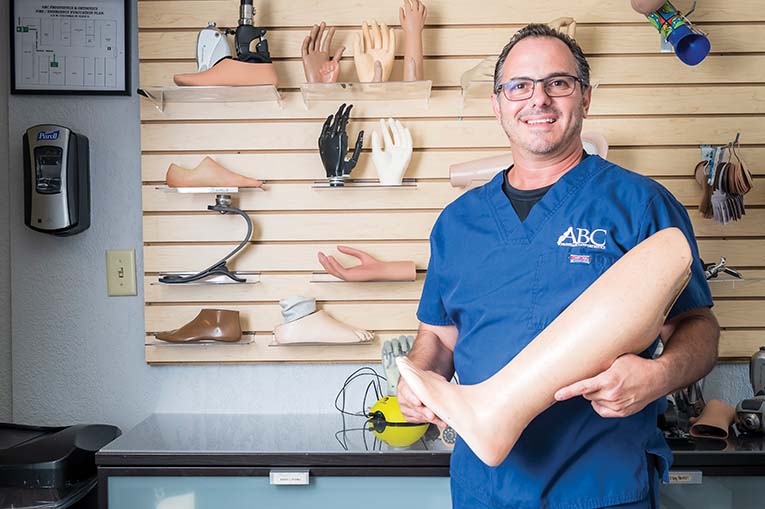 Following in his family’s footsteps. “When I graduated from high school, I didn’t have any idea what I wanted to do.” Saunders’ dad and uncle had a prosthetics practice in Orlando, “so I decided to start working for them in the lab. I liked prosthetics and realized I could get a degree [in prosthetics and orthotics], knowing I had a job waiting for me.” He graduated in 1992 and opened his own practice, ABC Prosthetics and Orthotics, in 1998.

“We run the gamut.” Saunders and his staff produce and fit a variety of prosthetics and orthotics, including mastectomy products; shoe inserts; braces; halos for patients with broken necks; helmets for babies; and prosthetic limbs. “We have a lab across the street where we manufacture about 95 percent of everything we put on patients.”

Rock your socket. There’s a high demand for custom sockets, the exterior casing that fits over the aluminum, stainless steel or titanium prosthetic. Some people prefer flesh tones; others like a decorative outside layer. “I have a guy now, and his is an Amazon print with birds, snakes and frogs. He says, ‘You have no idea what a conversation piece this is.’ He has to be 62 to 65 and he says, ‘Old ladies stop me and want to look at my leg.’ ”

Not quite the $6 million man, but it’s a goal. Saunders fits some patients with myoelectric limbs. “You’re using the muscle signals on the surface of the skin to activate the hand or the elbow. When you’re talking about myoelectric arms, that’s when prosthetics get expensive”—up to $50,000 for a hand or an elbow. “Those are my costs.”

From patient to family. In addition to having three college-age children, Saunders shares guardianship of a Bahamian boy (Nick) who began as a patient. “He was born without one leg and both arms. When I travel with Nick, I am amazed at the adults who will walk up to a 10-year old and ask, ‘What happened to your arms?’ He says, ‘I was born without them.’ ”

Life without boundaries. Part of Saunders’ role is to help amputees realize that their lives are not over. “We have a group called Limitless, and it’s what we call an amputee social network. We’ve taken patients and staff to Solar Bears games. We did Habitat for Humanity a few years ago. We’ll get a group of people together and go to dinner.”

A whale of a tale. Saunders has created prosthetics for pets, but his greatest challenge was creating a tubular steel brace for a rescued pilot whale with scoliosis. “One thing I never thought of was how to be neutrally buoyant. I had to add pool noodles to the metal. Obviously a lot of people can’t say they’ve made a brace for a whale.”

Farming his field. “There are only about a half-dozen schools around the country that teach prosthetics.” Saunders promotes his specialty by giving talks at high schools and working with student interns. “I have a kid now that’s 16. He was born without both legs, and he wants to go into prosthetics.”

This article appears in the September 2020 issue of Orlando Magazine.
Categories: Home Page Features, People
Tags: prosthetics, Prosthetist, Scott Saunders, story of a
Want to read the whole issue? Download and read this issue and others on Magzter.