Story of a… Poll Worker

As Precinct 53 clerk assistant Sharon Glover says, “You have to vote to express your opinion. All opinions count.” 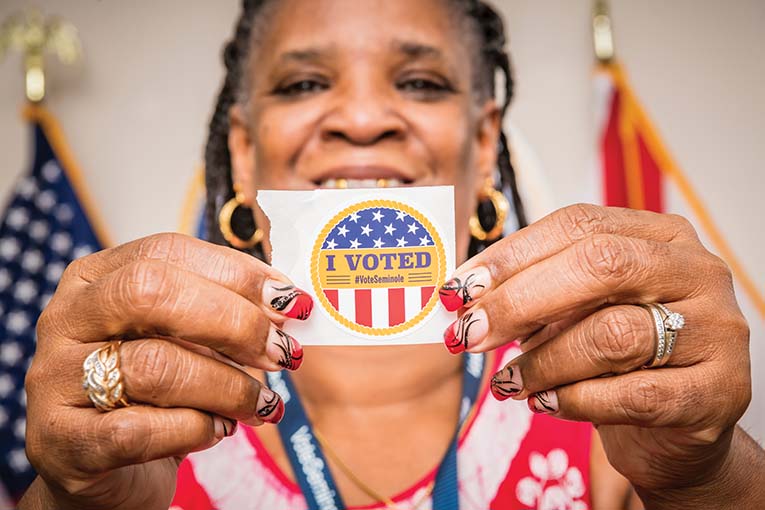 Her first election. A South Florida native who was raised in Georgia, Glover says she has always been interested in politics. “The first time I voted was when they had those machines where you go behind the curtain. I didn’t know what in the world I was doing.” Then someone showed her what to do. “I remember telling my sister, ‘You know what? I want to help people learn how to vote.’ ”

Getting out the vote. Glover lived in Tallahassee before moving to Sanford in 2006. While living in the state capital, “we used to go around passing out flyers getting people to vote. Voting is so important. If you don’t vote, there’s no sense in opening your mouth. How can you criticize something in politics when you don’t vote?”

A perfect fit. The year she moved to Sanford, the mother of two and grandmother of seven served as a poll worker for the first time. “Once they showed me the ropes, I just went from there. I’ve been doing it ever since.” She served at several precincts, including her own, before becoming at fixture at Precinct 53.

Taking a break from work to work. A car auction photographer, Glover takes time off from her job to work special elections, early voting and election days, for which she receives a stipend. “What I normally do is I use my vacation time. I love it. I wouldn’t give it up for anything.”

The election she missed. On June 6, Glover suffered a stroke and now uses a walker after months of hospitalization and rehabilitation. As a result, she was unable to work the August election.
“I missed not being able to be at that poll last term.”

No giving up. Poll workers get trained before each election cycle. During training for the November election, Glover endured episodes of “the shakes” as a result of her stroke. “It’s been very difficult. But I’m determined not to let anything get in my way.”

Seeing is believing. Glover loves to watch the expressions on people’s faces as “they put their ballot in the machine and watch their ballot get counted. It’s amazing.”

Early impressions. “When parents bring their kids with them, they get excited about voting. I like seeing that, especially when you give them stickers. I tell them, ‘When you get to the right age, you get to vote.’ ”

Creating a safe environment. Elections workers implemented procedures to protect voters from COVID-19 transmission. “We keep everything wiped down. We ask that voters bring their own pens, or we use a Q-Tip. It’s disposable. We make sure we have hand sanitizer. We wipe down every booth that’s being used. We make sure the people know everything is safe.”

Her advice before you vote in any election. “First of all, you have to make sure you’re at the right place for voting. Know who you’re voting for and why you’re voting for that person.” She recommends that voters do their research in advance.

This article appears in the November 2020 issue of Orlando Magazine.
Categories: Home Page Features, People
Tags: election, poll worker, Sharon Glover
Want to read the whole issue? Download and read this issue and others on Magzter.