Story of a… Opera Singer

Soprano Anna Eschbach loves “the intense emotion” of opera, often viewed as “the highest art form because it incorporates everything.” 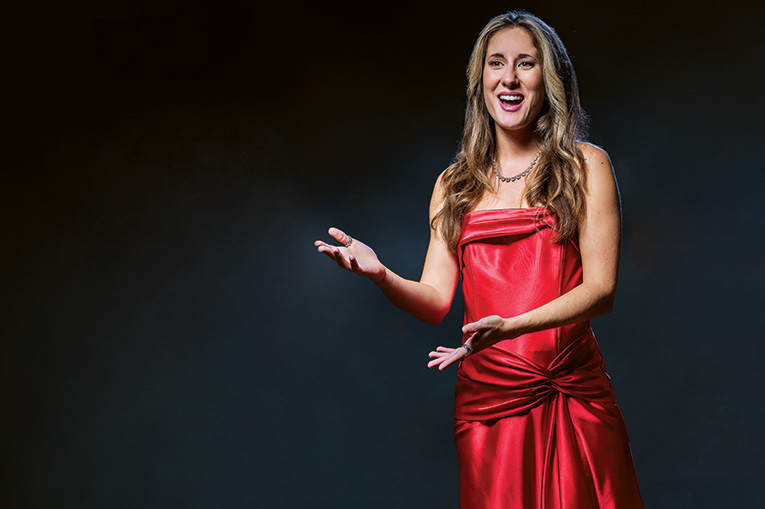 Nature met nurture. “My dad especially is a big opera lover.
I grew up with it in my ear all the time. When he discovered I had a talent, that’s when [my parents] started pushing me to pursue it. Without their support, I probably wouldn’t be here.”

That first time. “I was a freshman in high school when I sang my first stand-alone solo. That was for [then Winter Park High School choir director] Trey Jacobs, who basically said, ‘You’re going to do this.’ He didn’t ask me. He told me. I was very nervous. I remember the song I sang, which was one of the first Italian art songs—a gateway to opera—that you would give to a young singer. I did really well. I got up, walked out on stage, sang and felt tremendous relief when it was over.”

A cultural shift. Disenchanted with Orlando as a teen, Eschbach got her undergraduate and graduate degrees in vocal performance at Appalachian State University and the University of Tennessee. “I’m glad I got away for a bit and that I came back. Now I love Orlando.
I think a lot has changed about the city since I was 18 and definitely for the better. It’s so much more of a cultural hub now than it was when I was growing up.”

Her intro to Opera Orlando. Eschbach sang for several years with the  Knoxville Opera. “Technically the first time I sang with Opera Orlando [where she is now a studio artist] was in the chorus of Don Pasquale. I think that was 2016. I was part of the chorus, but I also played a non-singing role of the maid. I had to learn all of the blocking in three days, which, believe it or not, in the opera world is not atypical.”

Not your grandma’s opera. “Probably the stereotypical image of opera is what we call ‘park and bark.’ You’re wearing the costume. You have the set behind you. But you’re really just standing there singing. That is not today’s opera. Your body has to be able to do a myriad things”—including running or even hanging upside-down while singing.

Oh, the pastabilities! Opera singers perform in foreign languages by memory without the benefit of teleprompters. If you forget the words, “you make them up.” If, for instance, the opera is in Italian, a singer may “recite the Olive Garden menu. But I would like to think I’m always prepared for a performance. You practice it enough that the muscle memory just comes out.”

Her operatic hero. Eschbach admires soprano Anna Netrebko. “It doesn’t seem as if she’s acting. That’s always a challenge for opera singers. The difference between straight acting and singing opera is that you have to sustain your emotions for a much longer period of time because of the music.”

Doing what she loves. In addition to singing with Opera Orlando, Eschbach teaches voice and performs with other groups including her all-female ensemble, the Helena Collective. “When we were doing rehearsals for The Marriage of Figaro, I went straight from teaching to rehearsal. Despite the 14-hour days, I was having fun. It doesn’t feel like work, ever.”

This article appears in the March 2020 issue of Orlando Magazine.
Categories: News and Features, People
Tags: ann, art, eschback, opera, singer, soprano, story-of
Want to read the whole issue? Download and read this issue and others on Magzter.

The Best Shampoos for Hair Loss in Females