The Daily Buzz’s Jessica Reyes, 35, helps wake up millions of national TV viewers using a combination of sass and humor. 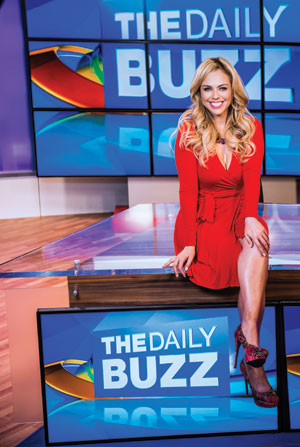 Reyes, the youngest of seven children, was born to be an entertainer but decided to focus her passion on radio and broadcasting rather than singing and dancing. After honing her sassy and fun-loving on-air personality for years as a midday radio personality for two Central Florida radio stations, hosting Mambo on Univision channel 26 in Orlando, and being the official spokesperson for Toyota of Orlando, she got her big break. In 2012, she was cast as weather and entertainment host for the nationally syndicated morning news and entertainment talk show The Daily Buzz, filmed at Full Sail Studios in Winter Park.

“The good thing about doing the weather for The Daily Buzz is they make everything really easy and viewer-friendly so I don’t have to say anything fancy. What people want to hear is if it’s going to rain or if they’ll need a jacket. I tell weather the way I would want to hear it.”

“I wake up at 12:30 in the morning. When I say good morning to my mom, she says goodnight. I have my house set up like an assembly line so I can wake up with my eyes closed and just hit start. I need to be at work by 2:30 a.m., but I like to arrive around 1 or 1:30 because I never know what’s going to happen on the show and I like to pump everyone up. I’m the cheerleader of the group and, coming from radio, I always have Latin or pop music playing to wake everyone up.”

Born in Camden, N.J., to Puerto Rican parents, Reyes has lived in Florida most of her life. “I think I became more Latina after living here. I get away with being sassy more than the average person; it’s expected of me. My boss tells me that’s why I was hired. I keep it real, and people identify with that. I’m essentially paid to be me.” That means some hilarious on-air antics, from delivering the holiday forecast with The Grinch to offering “weather with attitude,’’ hand on hip. (“You know what? We’ve got some hazardous conditions this Thursday and if you don’t like it, deal with it!”)

“Our intern, who runs the teleprompter, always complains that I improv too much for him to keep up.” Yet the most difficult part of her job is keeping her energy level consistent every show. This was especially tough when her mother was battling cancer. “I’m always a happy person, but it’s hard to fake it if someone in my family is sick. But even when my mom was sick, she kept a positive attitude and that was inspiring.”

“People don’t realize that on TV you can never have a bad day, a bad hair day or even look tired. Strong, bold Cuban coffee with lots of sugar is my best friend.”

This article appears in the November 2014 issue of Orlando Magazine.
Categories: Community