Story of a… Locksmith

Meet the smiths. His last name “is short for Kowalski,” Kowal explains. “In Polish, ‘-ski’ means ‘son of.’ For us, it was ‘son of blacksmith.’ His father liked the idea of being a smith, so “he started a locksmith’s shop in Carson City, Nevada. He taught my oldest brother, who taught me, and then I taught my younger brother.”

Born around the Fourth of July. That’s when Kowal founded Liberty Locksmith of Apopka in 1999, three years after he arrived in Central Florida. As for the name, “My grandfather came to Ellis Island from Poland in the early 1900s, and settled in Jersey City, which is how we got the name Liberty, because the Statue of Liberty is in Jersey City. It was in my backyard.” 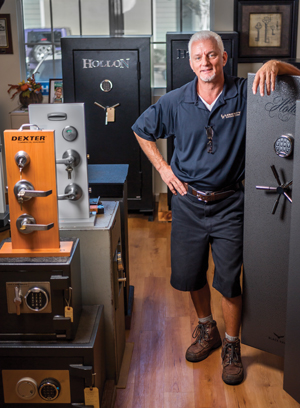 Buyer beware. “Most states don’t require locksmiths to have a criminal background check,” including Florida, says Kowal, whose website prominently advertises his criminal background check policy. “You’ve got criminals coming out of jail for breaking and entering.” When they can’t get a job, they consider becoming a locksmith. No one is going to ask any questions. “You just go downtown and get a business license, and that’s all you need.”

Locksmith beware. “So I went to this one house in downtown Orlando. The woman wasn’t acting right.” Kowal requires a valid ID to open a house for someone, but the woman said her license was locked inside the home. It turned out the house belonged to her brother, who had recently died; she had driven from Tampa to get at his possessions before her sister did. Kowal called police.

A lot of experience and a little luck. Unlike TV representations of lockpicking, “it takes two tools: a turning wrench and then the pick.” And some locks won’t give no matter what. “You can’t always pick a lock. There are more and more locks that are not pickable, and you have to drill them out.”

Safety is key. “People should rekey their locks, but they don’t. It’s silly. They buy a new house, and they don’t rekey the lock. It’s cheap insurance.”

He’s left cars in the dust. Cars are too cost-prohibitive to justify Kowal’s time. “You have to put so much money into the electronic programming equipment and the electronic key fobs, and then every six months you have to buy an update because they change. People say, ‘I had to pay $250 for this key.’ I’m like, ‘Yeah, I had to pay $10,000 to make it.’ ”

Working evictions is the worst. “I’ve done a couple where they had the sheriff there, and they had a moving company there. People were literally getting dragged out of the house, and their furniture was getting dragged to the street.”

Late-night sting. Kowal has done undercover work for the FBI, the U.S. Drug Enforcement Administration and the Bureau of Alcohol, Tobacco, Firearms and Explosives. One middle-of-the-night operation required Kowal to enter the house, storage unit and office  belonging to a suspect. After opening the building, “I’m sitting in my car and these guys are all covered with helmets and machine guns, and I thought, “What am I getting myself into here?”