Story of a… Knight

David Bobola, 30, has won swordfights, horseback battles and the heart of a princess at Medieval Times.

Chivalry is anything but dead for Bobola. The entertainer has spent the last seven years as a knight for Medieval Times Dinner & Tournament in Orlando, performing fights and stunts on horseback for 350,000 guests each year.

Starting with no equestrian experience, Bobola quickly developed the balance and precision that the shows demand. As for having the character of a knight, he says honesty and dependability play a role—and his leading lady sure thinks so. He married a Medieval Times princess. 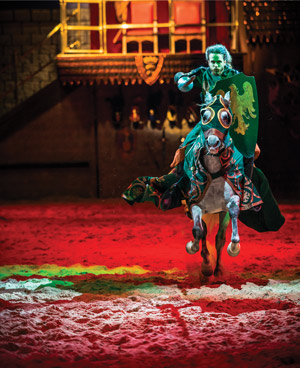 “When I moved to Orlando, this was the job I wanted. I just showed up. They hired me on the spot as a squire, which is just like the historical medieval times. I started with dirty work, like feeding and washing horses.”

He gained 30 pounds of muscle while training to become a knight. “I wanted to look the part. When I started as a squire, I was one of the smallest guys.  But we continually work out; they pay for us to go to the gym. We train constantly, practicing the fights for hours each afternoon.”

“As a squire, after I had basic riding technique down, I trained to become a knight in the horseback games, which takes arm muscles. I hold a lance—that giant stick—completely steady while riding. So steady that we catch rings on our lances while galloping at full speed.”

As a skilled swordsman, Bobola also performs basic strikes, blocks and other moves on the sandy floor of the arena. “It’s like fighting on the beach. The sand has give and moves funny, which really requires balance.”

Sometimes, things don’t go as planned. “A month ago, I was knocked in the head and started bleeding. But performing is such an adrenaline rush that the pain doesn’t settle in until after the show.”

I love the costumes. I’m a total dork. I feel at home in the armor—I’d go to the mall in it. But then I’ve always been a guy who goes to Renaissance festivals.”

“I met my wife here. Yes, I married a princess—people still get a kick out of that. She had just started to train when I was. We ended up talking one night until 4 in the morning. We just hit it off.”

“Chivalry has always been a big part of my life. I was brought up to be honest and treat others fairly. That’s required to be a knight, even if just one in a dinner show. The audience needs to feel that you are honorable and that they could trust you.”