Story of a… Home Inspector

Bring on the cat urine, the duct tape and the dead bodies because Jon Bolton has seen it all.

First he built. Bolton graduated from the University of Florida with a degree in building construction, following in the footsteps of his dad, a general contractor. “I got sick and tired of construction. My dad finally said, ‘Why don’t you get into home inspections?’ ”

When you can’t hire Superman. Bolton uses technology to see what his eyes can’t. Infrared cameras detect moisture damage and electrical problems. Drones provide backup roof inspections. “Drones can’t see everything, but we can at least fly it.” 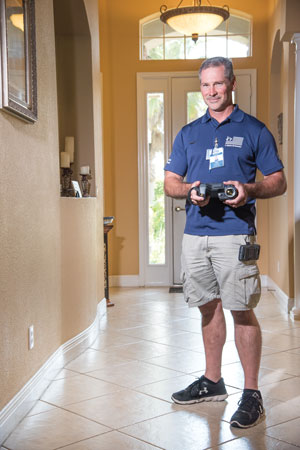 The 1,001 uses of duct tape. “I’ve seen it on electrical panels and AC equipment. Once, the entire bottom of a bathtub was covered in duct tape.”

At least they used shingles. All kinds of crazy happens at the hands of do-it-yourselfers, but Bolton’s funniest memory is of a jerry-rigged roof. “The roof repair was done with a desktop stapler.”

Flippers and floppers. “God bless the entrepreneurs. We need people to take ca-ca, make it nice and get it back on the market.” But there’s a flip side to flipping. “You may assume you’re going to save money hiring a handyman and not using permits, but it could cost you a sale.”

Welcome to “Slitherin.” Heat rises, and so, apparently, do cold-blooded creatures. “Believe it or not, I’ve found more live snakes in attics than any other animal. I’ve witnessed a snake go vertical up a wall and into a soffit.”

Eau de litter box. With 9,000 inspections under his belt, Bolton has inspected more than a few houses overrun by cats. One stands out. “The cat urine smell was so pungent that I couldn’t walk in there without a mask on. And I could still smell it through that.”

He nailed the landing. Some inspectors end up with major injuries from falls off ladders and roofs. Bolton just rolls with it—literally. “I crawled across a roof to see the chimney. The granulars were so loose that I was surfing down the roof. I tucked and rolled in front of the agents, the buyers, everybody.” He landed on his feet. “I did the old Olympic gymnast salute with my chest puffed out and arms up.”

Ignore that body in the garage. “I go in a garage, and there’s a dead guy. These things are going through my head: The blood’s exposed. There are people inside. Why is there a dead guy and nobody cares? Well, the seller produced ‘dead bodies’ for Universal Studios. It looked dang real.”

Things you can’t un-see. “I’m knocking on the door. The seller opens it, and he’s standing there completely buck-naked. I’m like, ‘Dude, I don’t want to see that.’ He said, ‘Yeah, come right in.’
That was so gross.”