Story of a… High Diver

World-ranking athlete Ginger Huber will dive 66 feet off a cliff, but mice make her scream like a little girl.

“Wow, you’re paid to do that?” That was the question Huber, then a University of Georgia diver, asked a friend who dove for pay. Her friend said, “You just have to be able to do a few tricks off the 3-meter, and that’s it.” Huber said, “Okay, I can do that.” 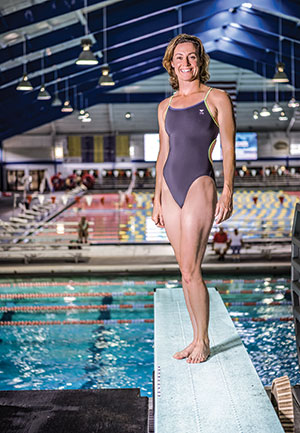 Taking the plunge. Huber worked as a diver at SeaWorld San Diego until 2015, when she moved to Orlando. She had already joined the women’s Red Bull Cliff Diving team and was ranked sixth worldwide last year. “I thought, ‘I’m not going to do that.’ But a friend and fellow diver said, ‘Let’s just apply. If you do it, I’ll do it.’ Then they announced it on social media: Here are the women we picked. I said, ‘Oh my gosh! What did we get ourselves into?’ There were only four girls in that first competition. We’ve been doing it ever since.”

What it feels like to travel 66 feet at 60 mph. “I’m just going to say it is a pure adrenaline rush. You’re willingly throwing your body off a high place into a hard body of water. Then you hit, and you’re okay.”

She trains at the YMCA Aquatic Center. “Initially when I started diving there I tried to stay very low-key and out of the way [of the student athletes who train at the center] because [diving program director] Mark Ruiz was doing me a huge favor by letting me dive there.
I didn’t want to cause too much drama because some of the stuff I do up there is very unconventional,” referring to the way she positions her body so her view of the water is obscured until she hits the surface. “I don’t want to scare the lifeguards or the staff.”

It’s easy to get psyched out. “Diving is just a huge mental sport. High diving lasts, like, two seconds. I try to think about just one thing or really nothing at all.”

The high dive is no problem, but mice… Huber’s fear of mice and rats began as a child in Savannah when a mouse her sister was studying for a science project escaped. “I jumped up on the nearest chair and started screaming. It’s amazing I can scream at that high of a pitch.”

It wasn’t Penthouse. Huber struggled with her decision to pose nude for ESPN the Magazine’s 2014 Body Issue after turning down an offer from Penthouse. “My mom is 75. She was raised Baptist, and she’s still the choir director and the organist for her church. She’s like, ‘What will little girls think of you?’ Then the issue came out. The next thing you know, they’re off bragging to their friends at church.”

Knowing when to retire. Though still in top form at age 42, Huber knows she can’t compete indefinitely. “I try to listen to my body. I also feel that if I can stay with the top girls, that is a good reason to keep diving. Eventually I would love to coach and stay in it in some sense.”