Story of… a Herpetologist

“I’m living my 6-year-old dream,” says George Van Horn, owner of Reptile World. “Hardly anybody ever gets to do that.” 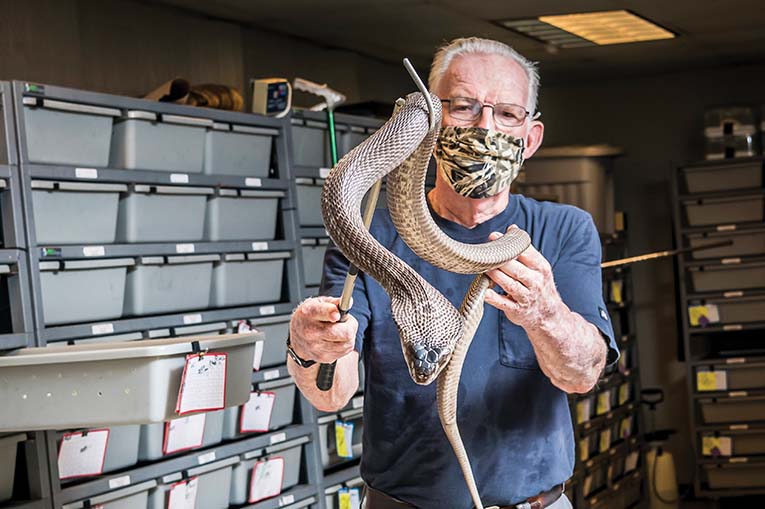 The field trip that changed everything. “My interest [in snakes] probably started when I was 3 or 4,” says Van Horn, who grew up in Miami. “When I was 6 years old, my mother enlisted me in the Cub Scouts. We went on a field trip to the old Miami Serpentarium. I didn’t know it was possible to work with snakes all day. Then I found out about the venom and the science.” He was hooked.

Mom, can I keep it? “I spent a lot of time in the Everglades and I kept bringing things home. My mother would come home from work and find an alligator in the bathtub. Her only rule was: no venomous snakes in the house. I broke that rule when I was probably 13,” he says, recalling the pygmy rattlesnake that sent his mother over the edge.

His partner in slime. He met his wife, Rosa, while on a snake-hunting trip to Costa Rica. After founding Reptile World Serpentarium in St. Cloud in 1972, he trained her to help him care for and milk—or extract venom from—the snakes. “She’s the best at making snakes happy and getting them to breed.”

Sss-teady income sss-tream. The sale of venom “has been our main customer base for 48 years. We work with university researchers and pharmaceutical companies.” Fortunately, Van Horn gets a price break on the resulting antivenin, which he always keeps on hand in case of a bite.

Near-fatal fangs. In 1997, Van Horn’s failure to heed his wife’s warning about handling a king cobra almost cost him his life. “That snake was my best venom producer, and he bit me four times before I got him off.” Van Horn spent 33 days in the hospital, and his left arm has never fully recovered. “I listen to Rosa acutely now.”

It’s only a flesh wound. Van Horn was working with a Western diamondback rattlesnake when it “swung around and got one fang in my index finger joint. I thought, ‘How bad can this be?’ So I didn’t do anything about it.” A couple of months later, while working on a construction project, “I was hammering away, and the very tip of my finger flew off. The finger started spurting blood. The bone and a lot of the tissue had died. The carpenters thought that was the best thing they ever saw.”

For some, that’s a few hundred too many. Van Horn keeps “somewhere between 600 and 700” snakes at his attraction. “I generally have between 400 and 500 snakes” working on the venom line.

Doubly deadly. After 14 venomous bites, “I’m allergic to all the venom.” He keeps a syringe of epinephrine handy in case “I get even a nick from just about any snake in here.”

There are pets, and then there are snakes. “Snakes are very interesting to keep, but they’re not pets. To me, a pet is an animal that is glad to see you when you get home from work. Snakes don’t care. They’re not affectionate,” although “they can give that impression.”

Sage advice. Florida is home to six venomous snake species. “I tell people if you get any kind of venomous snake bite, don’t mess with it. Go to the emergency room.”

This article appears in the October 2020 issue of Orlando Magazine.
Categories: Home Page Features, People
Tags: Herpetologist, Reptile World Serpentarium, story-of
Want to read the whole issue? Download and read this issue and others on Magzter.