Story of a… Hang Glider

From skis to sky. Some of the first hang gliders in the U.S. were water skiers at Cypress Gardens. The first time Jones hang glided at 17, he too was behind a motor boat. “In the early days we flew these Delta Wing Kites, and I loved that feeling of the skis coming off of the water.”

Love at first flight. “It’s a real tangible feeling of freedom and openness. You can’t really be up there flying around and thinking of anything else. A lot of people get a magic feeling about flying, and there’s really no type of flying that’s more pure than hang gliding.” 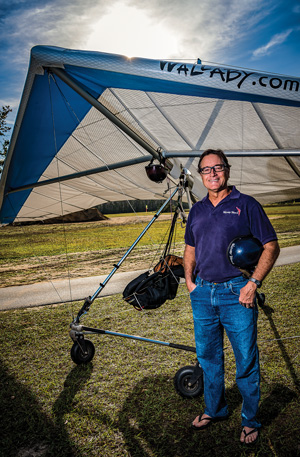 Apologies to Tom Petty. Jones is not into free falling. “People always want to compare this to skydiving. There’s a big difference between flying and falling. I love to fly, but the idea of falling creeps me out. Flying is mellow.”

Getting grounded. After hang gliding around the world, Jones came back to Central Florida with the idea of aerotowing, where a plane pulls a hang glider up to 2,000 feet before releasing. “It wasn’t until I had this idea of taking a tandem glider, mounting wheels to it, and towing it behind an ultralight [plane] that I realized I could have a hang gliding school here, where I’m from. So I bought 500 acres [in Davenport], and people thought I was crazy.”

Tandem thrill. Before people starting flying tandem, hang gliding was a solo sport. “There’s something about the first time you fly, discovering that magic feeling, and since almost every day I’m taking people up who have never been hang gliding before, I get to experience it with them.”

Malcolm’s clubhouse. Wallaby Ranch is a sort of hang gliding commune, with a screened-in kitchen and a chef, plus outdoor living spaces shaded by massive oak trees. “That’s part of the routine—we take people up, they have brunch with us and hang out. There are a lot of beautiful places in the world to fly hang gliders, but there are very few places to learn.”

The young and young-at-heart. “My youngest [client] was three and my oldest was 100. She was strong, physical and feisty, and just wanted to do it, and the three-year-old came with his family and watched all his older brothers do it and then was flabbergasted they were leaving before his turn.”

Bird’s eye view. “One beautiful, clear day I saw a shuttle going up from Cape Canaveral, and we see bald eagles all the time.” No close encounters, though.

Getting high with the rich and famous. Jones has made tandem flights with both Al Roker and Matt Lauer of the Today show on NBC, as well as actress Kate Hudson. “Most recently we hosted Mike Rowe for Somebody’s Gotta Do It. It’s an unusual business, but it’s fun.”

An ideal commute. Jones lives in Winter Park, an hour’s drive one way from Wallaby Ranch, but it takes him only 14 minutes to get home—even during rush hour. “I have a sea plane and can land right on Lake Rowena at my house.”