Story of a… Glass Artist

Life behind a torch has an unbreakable hold on David Sandidge, 51.

He looked up to his big brother. “I actually followed my brother Drew into the business. I thought it was the neatest thing watching him make these little things out of glass, so when I was old enough, I went to work at the same factory. I worked there every day after school and then part-time through college.”

His first career choice: commercial pilot. Sandidge had wanted to be a pilot since he was a boy. “After I graduated college with an education in aviation, I decided that glass was really more my thing than flying airplanes.”

Thirty-six years later . . . “I feel pretty blessed to have found something that I love at such an early age. After becoming a pilot and looking into that as a career, I’ve come to realize my passion is in glass, and it always has been.” 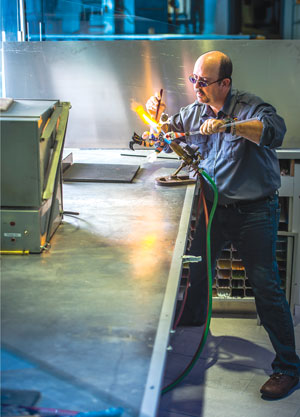 He surrounds himself with glass artists. His wife, Dixie, makes glass jewelry sold at his store, International Hot Glass in Artegon Marketplace, launched last fall with fellow glass artist Brandon Price. “There are pieces he makes solo and pieces I make solo. Some of the work at the gallery is a collaborative effort.” Six of the store’s eight employees are glass artists.

The Disney years. “I spent 20 years blowing glass at Disney—in Paris, Tokyo, Hong Kong and California. One of the most notable pieces that I did was presented by Bob Iger [CEO of The Walt Disney Company] to Nancy Reagan at the opening of the Walt Disney Archives at the Reagan Library.”

Designs often come to him while he creates. “Anytime I turn on the torch without putting a whole lot of thought into what I’m about to make, I just start creating things. I think there’s a kind of bank of images and designs in my head. Sometimes I’m driving into work and I see something like a beautiful horse in a field, and it inspires me to come in and make a horse.”

Yes, it’s dangerous. “Burns and cuts happen on a daily basis. There’s an area on my hand that’s burn upon cut and scar upon scar. Fortunately, I’ve never injured myself very badly. If my hand were to get into that flame at 3,000 degrees, it would be devastating. It would keep me out of work for weeks or more. But my hand has never gone into the flame.”

Grabby customers are his nemesis. “It makes me very nervous.” When children handle his glass, “I don’t even bother going to the parents. I go right to the kids and say, ‘You want to put that down.’ ”

He’s found his happy place. “The most natural place for me is to sit behind this torch. When I feel stressed and under pressure, I come to the torch, and I start making glass.”