Story of a… Drum Major

Veteran UCF Marching Knights drum major Sarah Spielman puts aside her shyness “to make music with 375 of my closest friends.”

She started leading at Boone High School. Spielman served two years as a drum major at Boone, where her sister was also a drum major, before attending her musical family’s alma mater. “I had always wanted to come to UCF.”

The word “quit” isn’t in her dictionary. “I’ve auditioned for drum major every year I've been here. After each audition I would go to the directors and say, 'What can I do to make myself better?' Then I would implement those things into being a marcher or a section leader." Her persistence paid off beginning in the 2017-2018 school year. 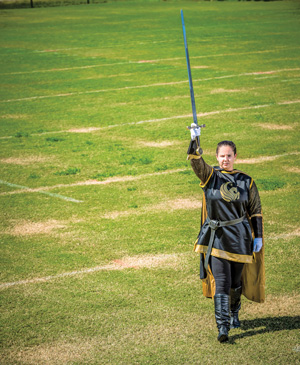 It’s about how she conducts music—and herself. “Being a drum major is more than being a student conductor. It’s also being able to promote a sense of pride on and off the field and being a role model. I’m glad I didn’t get drum major my first year . . . because I’ve had some time to work on my leadership skills and being the best band member I can be so I can go into that role of drum major.”

That unnerving first time. Spielman’s first show as drum major was a pregame performance, something she now commonly leads. “I stabbed the sword in the field [a UCF tradition of claiming the field for the Knights], and I looked up and the podium wasn’t set up yet. I was thinking, ‘What are we going to do? They’re not going to be able to see me.’ But thankfully they got it set up on time. I ran up the ladder and— boom—I was ready. Every pregame after that has been a breeze,” she laughs.

It’s a workout. Spielman began weight training in preparation for the school year because marching band is “a very engaging and physical activity. Even just conducting, your arms are up for 10 to 15 minutes at a time, especially for an entire show, and it can be exhausting.”

That larger-than-life moment. When conducting at the Peach Bowl last year, “I looked up and saw myself on the  screen. That was just a surreal moment. I was thinking, ‘Everyone is seeing me right now. They get to see what I love to do.’ It was a really powerful moment for me in terms of performing and music.”

Finding her rhythm. One of three drum majors this year, Spielman has a trick for keeping time during a show when crowd noise and a delay can throw you off. After she counts off, “I watch the drumline’s feet and keep my hands in time with that, so we’re always locked in. Then the band will follow.”

Marching forward. In her sixth year at UCF, Spielman hopes to graduate in May with a major in industrial engineering and triple minors in math, music and engineering leadership. “The end goal for me would be to do theme park engineering because I love theme parks and the happiness they bring to someone.” But she won’t abandon her “lifetime relationship with music,” Spielman says. “I would really like to find a community band where I can play saxophone.”