Story of a… Drone Pilot

He’s been at gunpoint, cussed out and assaulted, but Terry Clunk still believes the sky’s the limit for his misunderstood industry.

Call him Captain. Clunk flies an airbus for Spirit Airlines full-time while maintaining his commercial drone business, Aerial Perspectives, on the side. “Between flying an airplane four or five days a week and doing all my drone jobs, I’m super busy.”

A vision takes wing. With years of experience flying remote-controlled aircraft in the U.S. Army, Clunk got in on the ground floor of the drone industry in 2015 doing aerial photography for real estate companies. “My total investment to start my business was right around $10,000 with two drones, insurance, business licenses, an LLC—everything that goes with it. My first year I probably made $35,000 to $40,000.” 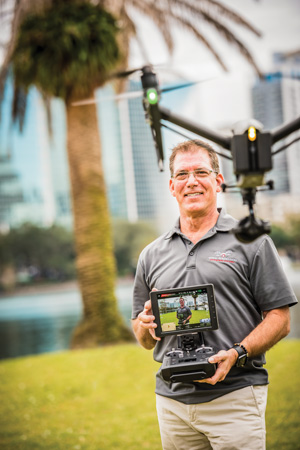 A crash course in awareness. In one of his first drone jobs, Clunk saw that his drone’s battery was running low. “It’s a little windy. I’m bringing my drone back, and as I’m about to grab it, the wind blows, and a branch comes down and hits my propellers. The propellers break. The drone hits the dock, falls into the water. This is my brand-new, $2,500 drone. It’s saltwater. It’s done.”

That time police surrounded him. “I was out doing a job, and some people saw me flying my drone. They didn’t like it and called the police. The next thing you know, three or four police cars surround me.” Clunk produced necessary documentation.  “At the end of the conversation, they said, ‘Can you come train our police officers on the rules and regulations and give us some instructions on how these drones work?’ ”

His view from the cockpit. “Drones have a ceiling of 400 feet. That’s the highest any operator—commercial or hobbyist—can go unless you get permission to go above that. Airplanes over congested, populated areas can only fly down to 500 feet.” That said, as a pilot, “I can’t tell you how many times I’ve crossed the shoreline coming across the landing to Fort Lauderdale or landing into Orlando International Airport, and I’m at 500 feet, and I look out my window, and there’s a drone trying to take my picture.”

His mantra is safety. Clunk provides instruction for people seeking FAA certification as commercial drone pilots through the UAV Coach drone-training website. His experience as an airline pilot is “why I’m so safety-oriented. I tell people, ‘Please don’t fly where you’re not supposed to. The rules are there for a reason.’”

A shotgun reception. Though Clunk operates his drones legally and with proper waivers, he still encounters hostility. On one occasion, “this guy comes out with a shotgun and is using some very inappropriate language. He said, ‘I’m going to shoot that thing out of the sky, and then I’m going to shoot you if you don’t get it off my property.’ ” To avoid such encounters, “now I literally knock on people’s doors and show them credentials that say, ‘I’m a professional drone operator, and this is what I’m doing.’ ”

“The future of drones is endless.” Now armed with a fleet of drones, Clunk is called to do TV commercial and video work, damage assessment after natural disasters and high-rise building inspections, in addition to aerial real estate views. He hopes to launch into utility inspections and doing aerial inspections of properties before police serve warrants. “There’s no application where you can’t use a drone.”