Story of A… Deejay

Katie Silson taps into her well-honed performing skills in her quest to “use music alone to affect people.”

The real-life Brady Bunch. From the time she was 4 to about age 10, “my family and I traveled around the country, mostly in the east, singing as a family.” The seven-member band was known as The Silsons. “We sang all different kinds of music. Sometimes it would be folk music, sometimes country. Other times, classic rock or R&B.”

Getting her performer bug out. A dancer as well as a singer, Silson has toured nationally and internationally with Disney Live! and has acted at Theatre Winter Haven, in addition to her gigs as a performer at Walt Disney World and as a Scareactor at Universal Orlando Resort. She also works as a puppeteer. “I divide my time between MicheLee Puppets and Our DJ Rocks” of Apopka. 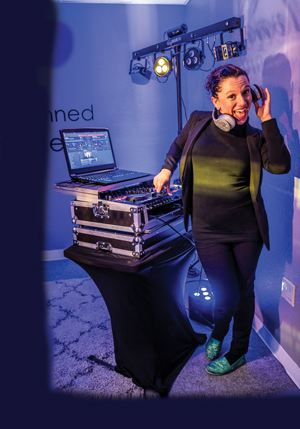 Setting people’s memories to music. “I like to create a soundtrack for someone’s life. I want them to be able to hear a song and go, ‘I remember that one time, this deejay—her name was Katie—did this really cool thing, and this was the song that was playing.’ ”

A romantic at heart. “My favorite events are the wedding circuit, because you’re part of the couple’s happily-ever-after. Who doesn’t want to be a part of that? It’s like they’re telling you their love story in that first dance. I love that.”

The day the music died. “My deejay equipment just completely stopped working. I don’t know if there was a phantom in my mixer or what, but everything went dead quiet in the middle of the song, and it was the worst.” She frantically checked her equipment until she found the problem about 45 seconds later, smiling through it all. “You can tell when I’m super-stressed because my face becomes like the Joker. I’m smiling so wide because I’m trying to hide the fact that I’m having an internal freakout.”

What makes a deejay rock. “It’s about having that positive vibe that makes people want to be around you.”

How she makes the magic happen. Silson creates customized playlists and takes song requests before a gig. “I feel like you can control the energy level as a deejay. Having those song requests really helps because you know somebody in the audience requested that. Positive energy is contagious. If you can get just one person to be comfortable with you and the room,
it affects everybody else.”

The bane of every deejay’s existence.  Journey’s Don’t Stop Believin’ is a perennial request that Silson says makes most entertainers cringe. “I really do love me some rock, but I could definitely suggest about 10 to 15 other fun songs instead.”

Masterpiece by Jessie J is her anthem. “I relate to that song so much because I’m never finished. I’m never satisfied with just being where I am. I’m always growing, always changing.”

Turning down the volume. After a gig, “I come home and walk my dog.” Then she calls her boyfriend to recap her day/night. “And then I drink tea and go to sleep. Though it’s a fun job, overall it’s exhausting.”