Story of a… Dairy Farmer

With a lifetime of experience, Gerald Fieser, 61, counters what he calls the “idealistic view of what farming should be.”

He’s not in Kansas anymore. Fieser’s father, a dairy farmer, moved the family from Kansas to Florida’s Volusia County and eventually took over the 325-acre DeLeon Springs plot that Fieser and his brother, Karl, now farm.

Then and now. When Fieser’s family moved from the Midwest, “there were 30 dairies in Volusia County, and three of them were located here.” Today Fieser Dairy is the only remaining dairy farm in eastern Central Florida. “Dairies were always located near the population center. A lot of
those dairies have sold out to developments.” 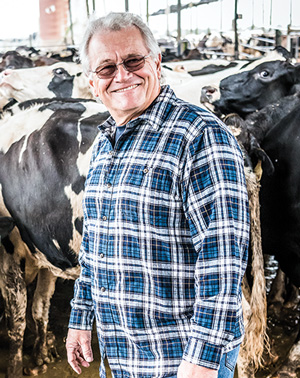 Farming was not his career choice. With a master’s degree in economics from the University of Florida, Fieser took over the farm in 1980 when his father got ill, and he had a life-changing realization: “I just didn’t like sitting behind a desk.”

That degree has come in handy. “In economics you learn marginal cost equals marginal revenue. As long as you can keep making a dollar, you keep doing it. We grew the farm till we had reached the maximum number of cows you can keep on this site without running into a lot of environmental problems.” Facing environmental regulations and runoff issues, Fieser keeps no more than 700 cows that get milked twice a day.

No such thing as a normal day. Fieser conducts vet checks, mows, welds, consults with a bovine nutritionist, repairs fences and machinery, bales hay—whatever needs to be done. “I’m a jack of all trades and master of one,” he laughs. Fieser and his brother employ an additional 11 workers, including six milkers, one herdsman, a calf feeder and a man who feeds the cows.

Growing nose-blind to the dairy air. Fieser keeps the windows of his office open on days when the weather is nice. “I don’t smell anything here. To me, it doesn’t smell at all.”

Cows are neither people, nor pets. “One of the biggest problems agriculturalists have done is humanize animals. They should be respected and cared for. But, ultimately, I’m going to eat that cow. I try not to get a personal pet attachment to them.” As for pets: “My wife’s got a lot of pets. I just don’t like animals in my house. I like an escape every so often from animals.”

Slowly getting squeezed out. “We’ll see a trend toward a lot bigger dairy farms in the future. These big dairies that are milking several thousand cows are just so efficient in what they do. It’s hard for us [smaller dairy farms] to be efficient. When we’re done with it, there will be no dairy here in the future.”