Story of a… Crime Scene Investigator

She grew up watching Cops. “I’m surprised, looking at Cops now, that my parents let me watch that show, but I was obsessed with it as a kid,” says Styer, a Colonial High School and University of Central Florida graduate and self-described science geek. “I thought the show was super-exciting. I loved watching all the chases, the K-9s, the whole bit.”

It started with a ride-along. Styer, who has logged 12 years with the OPD, originally planned to go into special education until she was introduced to the world of CSIs after high school. “My mom was actually friends with our former supervisor [Tom Yuelling]. I didn’t even know the field of crime scene investigation existed. She said, ‘Hey, go talk to Tom and see what he does.’ So I rode with him for a day, and I fell in love with it.” 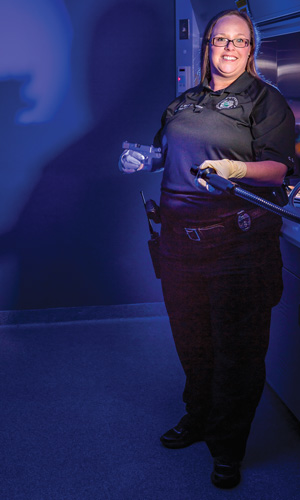 When crime scenes hit close to home. “You try to separate yourself from the emotion. It’s the same with Lt. [Debra] Clayton, when she was murdered. I was crying on my way to the scene, but when I got there, I was like, ‘Okay. It’s work mode.’ You just have to get it done. You have to give it your best shot.”

A Pulse sisterhood. Styer was one of five female CSIs to work the Pulse massacre scene. “The five of us got matching tattoos [of birds] to remember Pulse.”

That’s the way they roll. A former figure and speed skater, Styer met her husband, an Orange County cop, while working at a roller skating rink. “When I was leaving the skating rink to come to the police department, I said, ‘It was nice knowing you and your daughter. See you around.’ Then I happened to run into him a couple of years later. We’ve been together ever since.”

Parfum de Febreze. The smell of a crime scene sticks with you. “It gets in your hair and your clothes. I keep Febreze [air freshener] in my crime scene bag. We’ll squirt each other with Febreze if we have someplace else to go afterward.”

The CSI factor is real. Many jurors’ perceptions of forensic evidence are tainted by crime shows on TV. “We actually have to explain what we call the CSI factor in court to the jurors. We’ll say, ‘This technology may exist somewhere, but it definitely doesn’t exist at the local level.’ ”

Pizza and a side of flashbacks. “I’ll be out to lunch with my family, and I’ll be like, ‘Oh, I had a murder there. I had a burglary there.’ It’s funny. You relate your surroundings to your job because you’ve seen so many different places.”

Don’t borrow the lab cookbook. Styer is in her element when doing chemistry. “We have what’s called The Recipe Book. Just in case you forget how to mix the chemicals properly, they’re all listed on cards. The ninhydrin, the liquid fingerprint processing chemical, comes in a powdered form that we mix with acetone.”

Leave it at the office. “You have to leave the job when you get home. I do yoga and meditate. I read just to relax my brain.” One thing she did bring home from the job: a pit bull mix that was found tied to a tree. “She’s the best dog ever.”