Story of a… Comic

For more than half his life, Brian Bradley, 60, has made others laugh—and learned to master tough crowds.

Stand-up legends Jerry Seinfeld and Jay Leno were just hitting their stride when Brian Bradley joined LA’s comedy scene in 1980. Born in Philadelphia and raised in Orlando, Bradley moved to Los Angeles after college to do what many aspiring actors and comics do: see if he could make it.

“I started hanging around The Comedy Store. I was in a sketch comedy group with Andy Garcia,” he recalls. “I used to do improv with Jim Carrey, Robin Williams and Sam Kinison. It was that era. The stand-up comedy boom was just about to take off.”

For almost 15 years he performed stand-up 40 weeks a year, eight shows a week. “I’ve traveled to every state but five. Then I would go back to L.A. during the [TV] pilot season.” 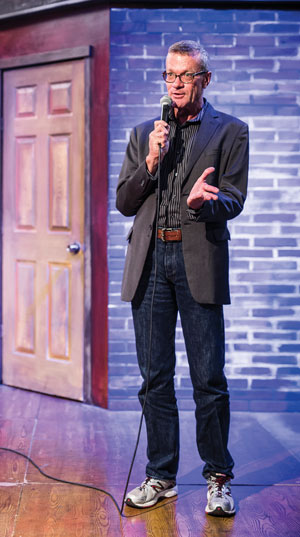 Those years were filled with near-misses at stardom, but every once in a while something big would hit—like the one-episode role he landed on Seinfeld in 1993 when he played Jerry’s butler.

Opportunity knocked again in 1994 with the chance to play Vince Fontaine in a Broadway revival of Grease. He followed that with an eight-year stint at the Comedy Warehouse at Disney’s Pleasure Island before joining the entertainment staff of Holland America and then Carnival cruise lines.

Bradley describes his brand of comedy as playful and improvisational. “A lot of comics like to get on their soapbox and rant. But for me, this is about being fun and entertaining.”

What makes him laugh? Everything from Woody Allen movies to Dumb and Dumber. “Give me a Jim Carrey movie with relentless shtick, and I love it. I think he’s a genius.” His favorite one-liner comes from Mitch Hedberg, who was known for short jokes delivered in a deadpan style. “He said: ‘I can’t wait to get off stage because I have roll of Life Savers in my pocket and the next one’s pineapple.’ He was so good.”

These days, Bradley also does improv workshops. “I love teaching. If you tell people, ‘You’re funny’ and give them permission to be, they come to life.” His advice to his students: “Find your own voice. Your funny comes from that point of view.”

His greatest comedy influences: Lucille Ball, Dick Van Dyke and Don Knotts. “When I need my muse, I’ll channel Robin Williams and I remember his playfulness and spontaneity.”

That comes in handy when he needs to win over a tough crowd. “I’ll start by saying, ‘Word on the street is that this is a tough crowd, and I won’t have it. We’re going to have fun, dammit.’ If you go up there with a need for approval, they’ll hold back even more.”

And he’s not above taking a more personal approach. “I’ve had a few hecklers, and instead of getting in a verbal fight with them, I go into the audience and shake their hand. One time I gave a guy a hug.”