Story of a… Clock Doc

Link Christensen spends his days diagnosing and repairing timepieces by listening to their “heartbeats.”

He fell into the role of clockmaker. That’s the traditional term to describe someone who repairs clocks. After graduating from Oviedo High School in 2003, Christensen started working for his father at the family-owned business, Christensen’s Clockworks. “I’ve always been mechanically minded, but I never expected to go into clockmaking. It became a career after I realized how much I enjoyed the work.” He bought the business earlier this year from his father, Eric, who is retiring.

C is for “clock.” Christensen began tinkering with clocks while learning his ABCs. “Sometimes I’d go on service calls with my dad and help him fix clocks at a house when I was in kindergarten. He would also bring home work, and I would help him fix or oil a clock or take it apart.” 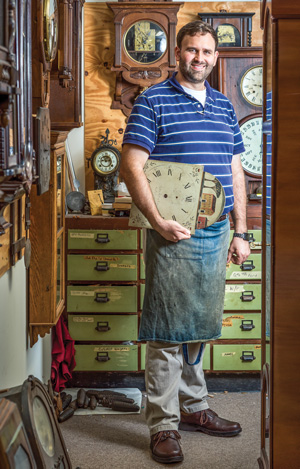 Learn on the job. “You have to find someone willing to teach you,” says Christensen. Even after repairing what he estimates as thousands of clocks, he admits, “I’m still learning things.”

It requires hitting the books. Physics and math come into play in determining pendulum length, the power of the springs, proper weights and gear ratios. “I’m terrible at math. We have books and formulas for those things.”

Wait for it. Vexing repairs can take years. “Every now and then we’ll get a clock that will hang around for a couple of years. We actually have a couple of them right now that will not cooperate, and we cannot figure out what’s going on. We had a clock here one time for 10 years. It was probably one of the most difficult ones to work on.” The customer’s response on the return of his family heirloom? “He cried.”

He’s a good listener—when necessary. Christensen can tell by listening to a clock just how off it is. “Sometimes you can hear what’s wrong—hear if something’s catching or not moving properly. It needs to be an even beat like a metronome.” But listening must be selective in a noisy shop. “I’m very good at tuning things out,” he laughs.

About those selective listening skills. When all the clocks start chiming or striking at once, Christensen can single out each sound. “They do all have their voice in a crowd.”

Cappuccino, anyone? Not everything that comes through the shop’s doors is a clock. “We’ll do music boxes. Sometimes we get a slot machine or a carousel—almost anything that moves someone might bring to us. We had a cappuccino machine once. We said, ‘Why not?,’ so we fixed it.”

His home clocks are right twice a day. Christensen has two antique clocks—a wall clock and a mantle clock—in addition to a modern wall clock in his home. However, “none of them are working. My wife doesn’t like the ticking.”

No room for perfection. “You can’t be a perfectionist in clock work. There has to be a little bit of play for everything to work properly.”