Story of a… Centenarian

107-year-old Midge Ruff of Winter Park credits “genes and being blessed” for her unusually long life.

She was born Mildred Abell in June 1911. An Indiana native, Ruff was the third of six children. “When I was born, my sister thought I was going to be her baby doll, so she called me Midgey Pidgey, so that’s how I got to be Midge. She soon found out I was no baby doll,” Ruff laughs.

Modern family. Ruff was spared the daily use of outhouses and gas lamps. “We had electric lights and indoor plumbing. We had more of the modern things you have nowadays.” When phones became available, “my father was a doctor, so we got one pretty quickly.” But she remembers visiting relatives who didn’t have such conveniences: “I liked visiting, but I wanted to come home really fast.” 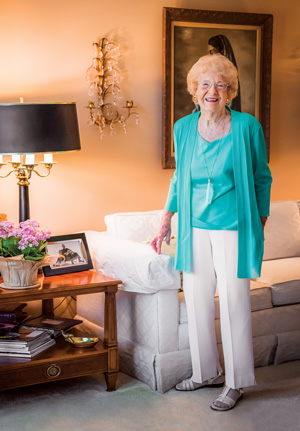 The family that plays together . . .  “We had fun together.
I can’t imagine being an only child.” Ruff recalls riding bicycles, and playing hide and seek, hopscotch and jacks. “When it was time for dinner, the mothers would say, ‘It’s time to come home.’ Everybody had dinner together.”

She holds the family record for longevity. Ruff’s mother and grandfather both lived into their late 90s. As for her siblings, “They’re all gone now. I’m the only one left. The others were all stronger than I was, more athletic. They were the ones I thought would live long—not me.”

That irreplaceable love. Ruff met her husband, Leon, during the Depression and married him five years later after the economy improved. They were married for 53 years until his death in 1989, 16 years after their move to Winter Park. Her happiest memory: “when I got married.” There’s been no one since. “He was the one,” she says wistfully.

She spent her 80s and early 90s traveling the world. Shortly after Ruff’s husband died, she and another widow began globetrotting. “We traveled all over Europe. We took a cruise to the Baltic.” They went on their last trip—an Alaskan trek that included a helicopter ride and walking on a glacier—when Ruff was 91. “It was just normal for me to do those things. I had good health. That’s what makes the difference.”

She’s like the Energizer Bunny. Ruff has been a resident since 2007 of The Mayflower retirement community, where her favorite pastimes are bridge, books and sudoku. Though she relies on a walker to help with balance, Ruff walks daily when the weather permits. A social butterfly, she also enjoys visiting with fellow residents. “It’s a busy place,” she says, smiling.

Her latest birthday celebration will be hard to beat. Ruff turned 107 on June 22 with a celebration at The Mayflower. Opera Orlando tenor John Murray sang “Happy Birthday” in Italian and English, and about 100 Mayflower residents and a dozen nieces and nephews joined in the festivities. The party was so wonderful that “I don’t know if I’m going to have one next year or not.”

Advice for the rest of us. “Take life as it is, and just go on and live it. You can’t worry about it because you don’t know what tomorrow is going to bring. Just live day to day and enjoy it.”