Story of a… Cat Behaviorist

Stephanie Merlin peers at the world through cats’ eyes to help correct their bad behavior.

From paws to claws. Having grown up around dogs, Merlin surprised herself when she brought home a shelter cat. “She kind of chose me. She was sitting high up on a shelf. She immediately started head-butting me and purring. Then she started walking forward, fell off the shelf, and I caught her. There was this moment: ‘I just saved your life. You like me. I like you.’ “

Are you a “cat whisperer”? “Sometimes [that term] gives people the idea that cats are speaking to me, and in that sense, no. But I definitely feel that I have good intuition and observational skills to understand what a cat is experiencing based on how they are communicating through their body language or vocally.” Merlin’s expertise also includes a Specialized Certificate in Feline Training and Behavior from the Animal Behavior Institute. 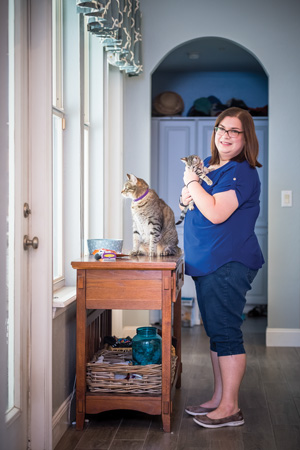 Jackson Galaxy as inspiration. “I met him at a global pet expo before I ever did my own cat behavior stuff. I was a fan, loved what he did. Now I watch his show [My Cat From Hell on Animal Planet] and I’m like, ‘Yes, I would have done that.’ It’s validating for me. He’s the most mainstream example of what I do. It’s an unconventional profession.”

Her own cat from…heck. “My most challenging cat was a ragdoll. They’re known for being docile and friendly, and she was the exact opposite. She’d get swatty and bitey if you barely touched her. The clients had just moved into a new house, and this cat was knocking things over, swatting at things. She was just an overly sensitive cat that needed slow exposure to different environments. I recommended finding a room for her with all her own stuff. Then we slowly acclimated her to the other parts of the house.”

Starting from scratch. Merlin’s own cat, Chara, was a “3 a.m. meower.” Merlin concluded it was attention-seeking behavior and forced herself to ignore the plaintive cries until Chara stopped. “I had a good six months when she was doing great. Then she started again, and I’m having to work through the meowing again. I wouldn’t recommend that behaviorists work with their own animals because it’s so much harder. I feel guilt, and it’s so much easier to give in because you have that connection.”

Stupid human tricks. “People with kittens will put their fingers in front of the kitten and have them bite and chew. It’s cute when they’re little, but you’re teaching them that you’re prey, and it’s not cute when they’re an adult cat.”

It can be a long road. “My hardest thing is never the cat, but people following through. People have expectations for things to be fixed like you fix your washing machine. Behavior modification takes time and patience. Sometimes people give up and turn the cat back into a shelter. I work hard, give them all the tools and support, but if they don’t want to follow through, there’s not much more I can do.”

Biggest myth about cats. “That they’re aloof and independent. They’re social animals. They do require attention and care from us.”