Story of a… Carillonneur

Playing the carillon in Bok Tower 200 feet in the air, Geert D’hollander is on cloud nine.

An enchanted childhood. D’hollander grew up climbing 14th-century church bell towers in Antwerp and Ghent, Belgium, where his father was a professional carillonneur. “It was like Harry Potter with all those secret doors—going places nobody else gets to go.” 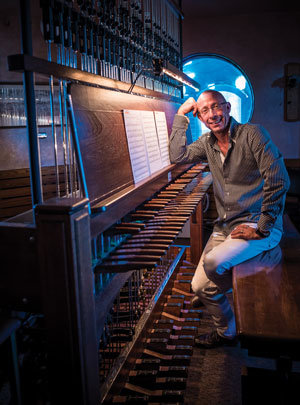 Fated for Florida. When he turned 17, his father wanted him to see the world’s greatest musical  instrument, so he flew him from Europe to Lake Wales, Florida. “In the carillon world, everybody knows Bok Tower. It’s the number-one instrument in the world. It’s more than just the bells—the location is very unique. A lot of instruments are in the middle of the city where there’s a lot of noise. But here we are surrounded by nature.”

Playing heavy metal. The 60-ton Bok Tower carillon features 60 bells ranging from 16 pounds to 12 tons. Playing a carillon is similar to playing a piano, but it’s more physical. When a note is pressed, the clapper on the inside strikes a bell. The treble clef is played by the hands, and the bass clef is played with the feet. “I’m a musician playing the heaviest instrument in the world, and it’s physically pretty demanding.”

Getting his dream job. In 2012, D’hollander became the director of carillon services for Bok Tower Gardens. “Here, it’s so beautiful and serene, and the design of the tower is so unique—plus you can play until two in the morning because there’s nobody around to hear it.”

He’s world-famous. D’hollander has composed more than 50 original works and has created hundreds of carillon arrangements from popular and classical music. “I can compose from home, but I’d rather be in the tower—it’s an absolutely inspiring place to work.” He’s also won first prize in more than 30 international competitions and is a mentor to international carillon students who study at Bok Tower.

His scariest day. D’hollander isn’t afraid of heights or lightning, but he does recall one unnerving experience. “Three years ago, I was sitting in my office [in the top of the tower] and I got dizzy. I looked outside and the tower was shaking, but the trees were calm. Later we found out there was an earthquake in Cuba, and we felt it here in the tower.”

A lone wolf. While he likes a variety of jazz, modern and classical music, he says there’s nothing like Peter and the Wolf on the carillon. “The big bells are perfect for the wolf, and the smaller bells are great for the little birds. It’s like having an entire orchestra all to yourself.”

A family bond. D’hollander plays duets with his father, who still lives in Belgium, but he also plays tunes with his 11-year-old daughter, who likes to accompany him to work and explore the corners of a tower where no other kids can go.